Rep. Eric Swalwell (D., Calif.) played coy Wednesday about voting to shut down the federal government over special counsel protection, ultimately admitting he would not vote for any legislation to keep the government open that "doesn't include protecting Bob Mueller."

MSNBC’s Hallie Jackson spoke with Swalwell about congressional efforts to protect special counsel Robert Mueller and his investigation into alleged collusion between Russia and the Trump campaign during the 2016 election.

Jackson asked Swalwell how serious he was about such a proposal, and whether he would like to "take this all the way to a shutdown."

Swalwell avoided giving a direct answer, pointing the finger at President Donald Trump and Republicans for being unwilling to pass special legislation to protect Mueller. He claimed Trump was trying to "torch" the rule of law, and said Republicans were willing to let Trump get away with it. Swalwell said his goal was to "preserve" the rule of law and ensure the "Mueller investigation is legitimate."

"Am I hearing you would then support a shutdown if that's what it takes to get this done?" Jackson asked.

Senate Majority Leader Mitch McConnell (R., Ky.) made clear he will not allow legislation of that sort onto the Senate floor, considering it a waste of time. He called the legislation "a solution in search of a problem," since "the president is not going to fire Robert Mueller." 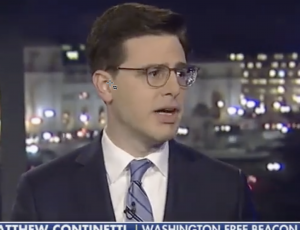 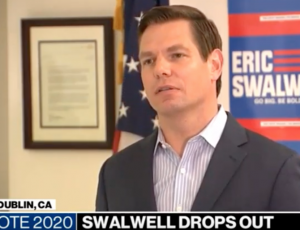 Swalwell Walks Back Call for Impeachment