'Maybe one of Anthony's trusted staff could deliver secure phone?'

Emails released by the State Department on Thursday included a heavily redacted message between Clinton and Abedin, who is now the center of a newly reopened FBI investigation after hundreds of thousands of emails linked to Clinton's private server were discovered on the laptop of Weiner, Abedin's estranged husband. Weiner was under a separate FBI investigation for sexting a minor.

On Aug. 2, 2010, Abedin and Clinton discussed the need to send a secure cell phone through the mail. It is unclear who or what the phone was for. 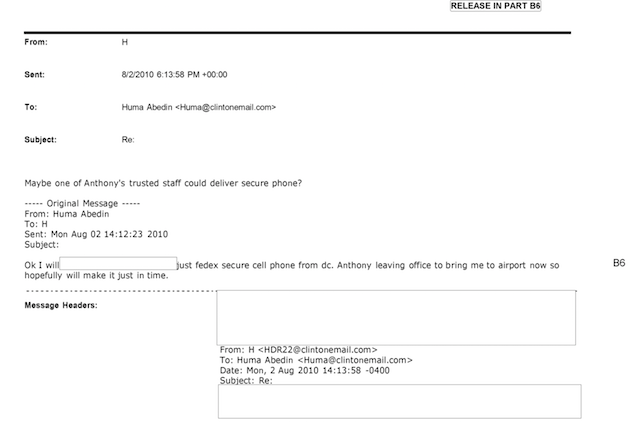 "Just fedex secure cell phone from dc," Abedin told Clinton, responding to a message that was redacted under the personal privacy exemption under the Freedom of Information Act.

"Anthony leaving office to bring me to airport now so hopefully will make it just in time," Abedin said, likely referencing her husband Weiner, who was then still a sitting congressman. Weiner would resign in disgrace the next year after his first sexting scandal.

Clinton suggested to Abedin that one of Weiner's staff members could deliver the secure phone.

Clinton herself did not use a secure phone, but opted to use her Blackberry after the National Security Agency denied her request to obtain a similar state-of-the-art device used by the president.

The FBI investigation into Clinton's private email server was reopened after 650,000 emails were discovered on a shared laptop between Abedin and Weiner. FBI agents are currently assessing whether the emails contained classified information. Some agents believe it is likely they will recover the thousands of emails deleted by Clinton.