In a fundraising email, Randy Bryce tied his inability to responsibly pay off his debts and his work to overcome related challenges, to the struggles of Ironworkers everywhere. He then attacked Ryan for being against working people who "struggled at times to make ends meet."

"Ironworkers work hard for our money. We take contract jobs. Short term, often unstable, work. We put our blood, sweat, and tears into building America so that we can scrape by and put food on the table," the email read.

"Paul Ryan and his allies are once again trying to attack me for being a working person who has struggled at times to make ends meet," the email continued.

Bryce was spurred to pay back delinquent debt after it was reported by the Milwaukee Journal earlier this month. The initial report from the Journal explained how Bryce had previously been delinquent on child support payments, debt he paid off two months after launching his campaign. The second debt, more recently paid off, was a 15-year debt for $4,245 after interest from previous girlfriend Rhonda Slechta to purchase a car.

Bryce’s Democratic primary opponent attacked him earlier this month for the delinquent child support payments by sharing the hardship she went through when her "ex-husband got behind on his child support."

"When my ex-husband got behind on his child support, I had to take a second job," Myers said. "I put my personal interests aside and focused all my attention on providing for my family."

Bryce said his inability to pay his debt in a timely fashion was a result of being "downright broke."

"I've been very open about the fact that like so many others just trying to get by, at times I was downright broke," he said. "I'm not proud of the fact I've had to borrow money from people who were kind enough to help me out when money was tight, like Rhonda."

Court records show Bryce made $76,000 annually a few years ago. His child support lists him as making $50,000 annually, although, Bryce acknowledged he has not worked since launching the campaign.

Slechta sees her ex-boyfriend's struggles being a result of him "making horrible life choices" that "screwed" her over, and not a result of factors outside his control. She also noted that even though she is a single working mother, she always pays her bills.

"I helped Randy when he was making horrible life choices and, in return, he screwed me over," Slechta said last week. "I was — and still am — a single working mother who works hard to pay my mortgage, send my son to school and always pay my bills."

Slechta had attempted to obtain the money owed to her, receiving a default judgement in 2004 from small claims court after Bryce didn't show up.

"My only hope for repayment was maybe someday Randy needed credit and would have to pay what he owes me," she said.

Despite having made $37,640 more than the median household income in Wisconsin, Bryce did not pay back his past debts before entering the WI-01 Congressional race.

A Democratic Party Attorney contacted Slechta to let her know she would be paid the balance owed only after Bryce's campaign was asked by reporters about the overdue loan.

Bryce's fundraising email, in it's entirety: 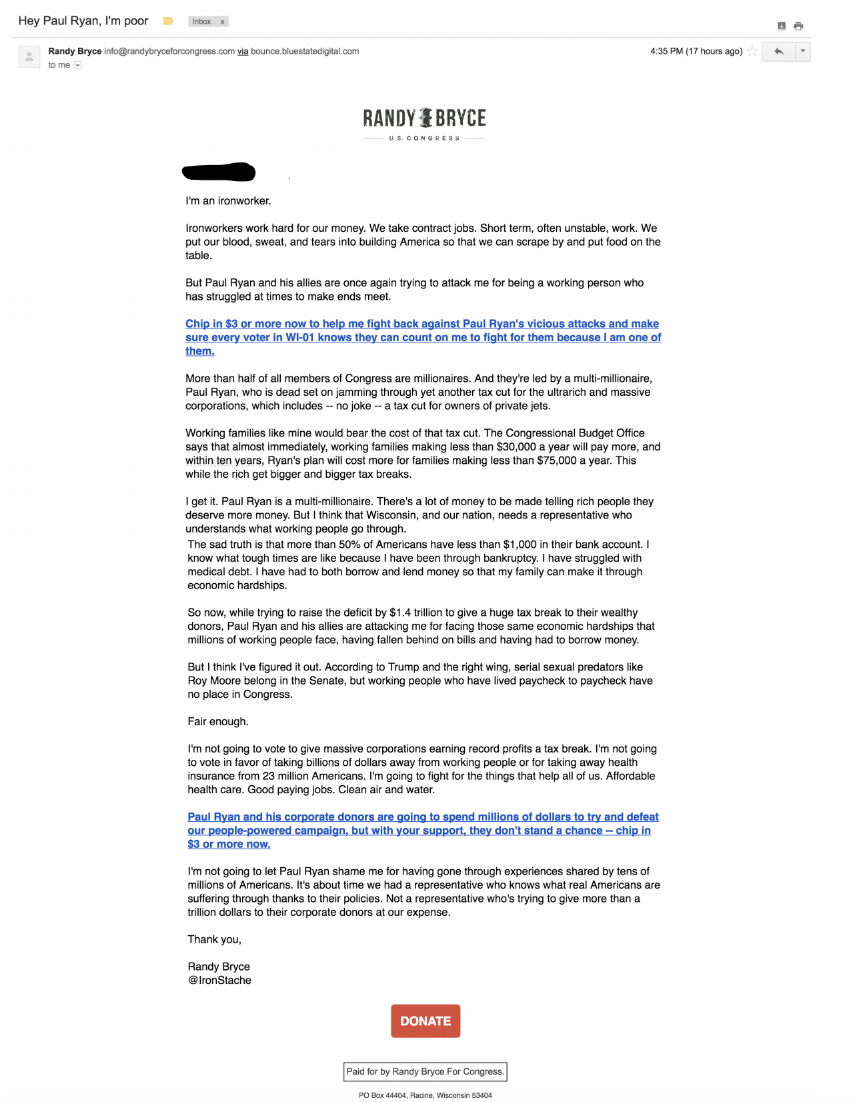