Sen. Rand Paul’s (R., Ky.) attempt to impact the Wyoming Republican primary at the last minute turned out to be a dud as the candidate he endorsed lost to Liz Cheney in a landslide.

Paul’s decision to meddle in Wyoming politics with a Sunday endorsement of state legislator Leland Christensen stemmed from Liz Cheney being the daughter of former Vice President Dick Cheney.

Paul called Christensen on Sunday to tell him that he was being endorsed as the "main alternative to Liz Cheney" and did interviews with Politico and the Washington Post in which he bashed the policies of her father. He also posted a video to his social media accounts urging people to vote for Christensen.

The endorsement was embraced by Christensen but seems to have had little impact in Wyoming.

The Associated Press called the race early Tuesday night with Cheney receiving twice the number of votes as Christensen, who came in just ahead of other Republican candidates in the race.

Cheney is expected to easily win the general election in November. The Wyoming at-large district has been represented by Republicans since 1979, when Dick Cheney took the seat back for the party. He represented the district for the next ten years before being named secretary of defense by President George H. W. Bush.

Cheney celebrated the victory by posting a picture of her hugging her father to Twitter.

I'm honored by the trust Wyoming GOP voters placed in me to serve as our next congressman https://t.co/gHsVl7n0ljpic.twitter.com/VG81gSpgwj 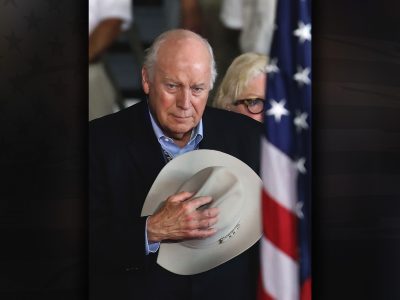