During last night’s debate, Katherine Fenton asked President Barack Obama, "In what new ways do you intend to rectify the inequalities in the workplace, specifically regarding females making only 72 percent of what their male counterparts earn?" She appeared to be unaware that Obama has a history of paying women less than men.

A Washington Free Beacon study of Fenton’s Twitter profile, @Misskf, reveals that she has launched her own war on women, specifically women who like sports. Fenton tweeted the following public service announcement to her followers:

According to Forbes, women make up more than a third of the 14 million-plus people who watch major sporting events including the NBA Finals, World Series, Daytona 500, and Stanley Cup Finals. Nearly half, 46 percent, of the 111 million people who watch the Super Bowl are women.

Fenton’s Twitter feed also reveals that purple Joose is her choice to get blackout drunk and she has a history of getting wet at happy hour. 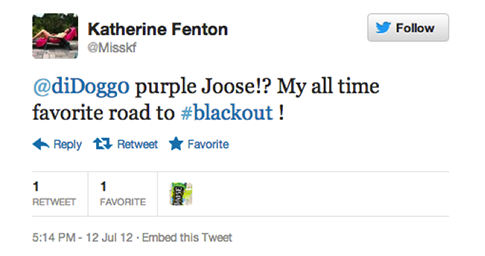 She also suggested that @diDoggo and @KackRose refrain from jerking guys off in meadows. WFB fact-checkers deem this good advice.

Fenton demonstrates a very sophisticated sense of humor on her Twitter page.

Fenton has officially been inducted into the Washington Free Beacon‘s binder of women.