In the New York Times' latest effort to take down Sen. Marco Rubio (R., Fla.) and his efforts in running for president, the paper dug through his financial records.

The Times found that Rubio "splurged" on what was reported as a "luxury speedboat." The boat turned out to be a 24-foot EdgeWater 245CC Deep-V Center Console—a fishing boat, for the less nautically inclined. Rubio has said owning the boat has always been a dream.

Politico reported that the boat included two new 150-horsepower 4-stroke Yamaha engines—a standard among fishing boats—and is priced at $11,618.00. The Times overlooked Miami’s multimillion-dollar yachts that have hosted the richest of the rich and instead zeroed in on Rubio’s dream dinghy.

The Times has yet to target current Secretary of State John Kerry’s $7 million yacht and his docking it in Rhode Island to avoid paying $500,000 in Connecticut state sales tax as well an annual $70,000 in an excise taxes. Kerry’s yacht has two cabins, a pilothouse with a wet bar and wine chiller. During the uprising and regime change in Egypt, Secretary Kerry could be found in the Nantucket sound on the "Isabel." Rubio’s fishing boat has a center control console. 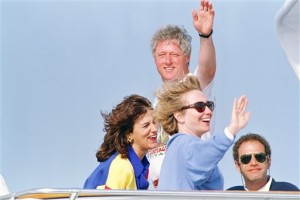 While Democratic presidential candidate Hillary Clinton does not own a luxury speedboat or a multimillion-dollar yacht, she has been photographed cruising around with celebrities and their yachts. In 1993, the Clintons joined then-Sen. Edward Kennedy and former First Lady Jackie Kennedy Onassis on a 70-foot yacht. Maurice Tempelsman, a diamond trader and long time companion of Onassis, owned the yacht.

No word from the Rubio campaign if the senator had his flippy-floppies while sailing around on his fishing boat.