In January 2011, Jared Lee Loughner shot 19 people in Tucson Ariz., killing six and critically injuring Giffords. Loughner, a diagnosed schizophrenic, had hated Giffords for years, stemming back to an incident in which she did not take seriously his concerns that grammar was a government mind control conspiracy.

But in the immediate aftermath, many on the left pointed fingers at Palin for a Facebook posting in which she put targets over the districts of vulnerable congressional Democrats, including Giffords'.

No less than ABC's Jake Tapper (now at CNN) pointed out at the time, "There's no evidence that the shooter even heard of Sarah Palin … The shooter's motives remain unclear. One acquaintance from 2007 described him as liberal."

Still, that did not stop the Times from pushing that storyline six years later, after an ardent supporter of Sen. Bernie Sanders (I., Vt.) shot five people at a Republican congressional baseball practice in Alexandria, Va. on Wednesday.

"In 2011, when Jared Lee Loughner opened fire in a supermarket parking lot … the link to political incitement was clear," the Times argued. "Before the shooting, Sarah Palin's political action committee circulated a map of targeted electoral districts that put Ms. Giffords and 19 other Democrats under stylized cross hairs."

"Though there's no sign of incitement as direct as in the Giffords attack, liberals should of course hold themselves to the same standard of decency that they ask of the right," the Times editorial board wrote.

Backlash on social media was swift and immediate.

And not just any paper. This wasn't some diarist on Daily Kos. This was the editorial board of the New York Times. https://t.co/NgoEacaLHZ

The NYT is disgusting. Apparently it takes more than six years for the esteemed Gray Lady to understand the facts of a breaking news story.

The New York Times is well aware that any link between Palin and the Giffords shooting were long debunked, but they're going for it anyway. pic.twitter.com/BgzaQFQMz6

If the NYT as an institution will say these things publicly, what are they doing *privately* to distort and politicize the news?

The Times has since amended its editorial to remove statements suggesting a direct link between political incitement and the Giffords shooting, issuing a correction at the bottom of the article.

"An earlier version of this editorial incorrectly stated that a link existed between political incitement and the 2011 shooting of Representative Gabby Giffords," the newspaper wrote. "In fact, no such link was established."

Palin responded to the Times with a statement on Facebook, calling the editorial "sickening."

With this sickening NYT's editorial, the media is doing exactly what I said yesterday should not be done. Despite commenting as graciously as I could on media coverage of yesterday's shooting, alas, today a perversely biased media's knee-jerk blame game is attempting to destroy innocent people with lies and more fake news. As I said yesterday, I'd hoped the media had collectively matured since the last attack on a Representative when media coverage spewed blatant lies about who was to blame. There's been no improvement. The NYT has gotten worse. – SP

UPDATED 11:51 A.M.: This post was updated to note that the Times amended its editorial and to include Sarah Palin's statement.

Admit It, Sexual Assault Allegations Are More Credible When They’re Against Republicans 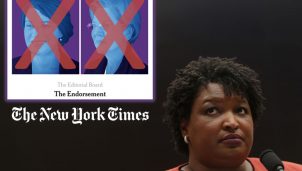