Missouri Sen. Claire McCaskill (D.) had to skip a question on the anti-Semetic efforts to boycott Israel because she doesn't not know what the acronym "BDS" means.

McCaskill was asked about the Boycott, Divestment, Sanctions Movement, commonly referred to as BDS, during a town hall stop in Camdenton, Missouri, last week.

"I don't know what anti-BDS is," McCaskill said as she moved on to the next question.

McCaskill is one of thirteen Democratic senators to sponsor the Israel Anti-Boycott Act, which directly addressed the BDS movement.

A spokesman for McCaskill said that the senator is "obviously" familiar with the issue, despite not recognizing the acronym.

"She didn't immediately recognize the acronym, but is obviously familiar with the issue," said the spokesman.

McCaskill's support for the anti-BDS legislation has become a hot-button issue for her, forcing her to tell the Intercept that she is "taking a look at" the legislation. She was also criticized in the local Missourian for her support for the bill. 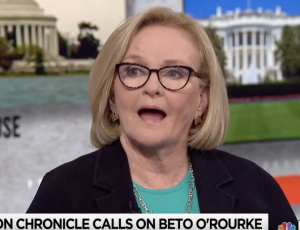 McCaskill On Democratic Infighting: ‘What The Hell Are They Thinking?’