Sen. Claire McCaskill (D., Mo.) on Monday admitted that outside contributions to her campaign were "just as bad" as her Republican opponent, whom she castigated for receiving financial support from third-party groups.

One of the podcast's co-hosts initially asked McCaskill about her meeting with Kavanuagh coming up on Tuesday and what she would ask him, prompting her to talk about the landmark Supreme Court decision Citizens United in 2010 and how it opened up the floodgates for money in politics. She then pivoted to talk about her Republican opponent, Josh Hawley, and claimed somewhere between 80 to 90 percent of his donations are from third-party groups.

Co-host Jo Mannies pressed the senator on the role of the Senate Majority PAC, a super PAC that has spent tens of millions of dollars against Republicans, prompting McCaskill to concede that they are "just as bad."

"Just as bad, just as bad. I feel just as strongly about that. I've said over and over again publicly this door swings both ways," McCaskill said. "I recommend to everyone, ignore every ad that you can't figure out who paid for it."

The National Republican Senatorial Committee slammed McCaskill for her hypocrisy on this issue, saying all she has to do is talk to Senate Minority Leader Chuck Schumer (D., N.Y.) and get him to stop airing the ads. J.B. Poersch, an ally of  Schumer, was tapped last March as the president of the super PAC.

"If Claire McCaskill really has a problem with super PACs airing ads on her behalf, all she has to do is ask her good friend Chuck Schumer to stop airing them," said NRSC spokesman Bob Salera. "This is just another case of Claire McCaskill saying one thing to voters, but doing whatever is best for herself behind closed doors."

The Senate Majority PAC has spent nearly $8.7 million against Hawley and over $1.4 million supporting McCaskill as of Aug. 20, according to the Center for Responsive Politics.

The same PAC has also spent millions in other Senate races, including over $2.5 million for Sen. Joe Donnelly (D., Ind.) and $5.2 million against his Republican opponent, businessman Mike Braun. It has also reserved $23 million in air time for the reelection of Sen. Bill Nelson (D., Fla.), which will be used Oct. 2 through Election Day. 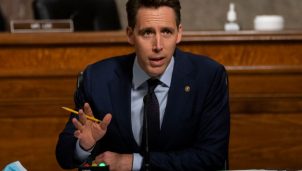