Gayle Manchin, the wife of Sen. Joe Manchin (D., W.V.), was fired from her position as secretary of the West Virginia Department of Education and the Arts on Monday after she attempted to push back against action by the state legislature to eliminate her agency.

Gov. Jim Justice (R., W.V.) announced that the decision to terminate Manchin came after the secretary waded into the conversation surrounding the future of her agency by claiming that efforts to eliminate the Department of Education and the Arts were politically motivated, the West Virginia MetroNews first reported.

The controversy arises as the governor contemplates whether to sign or veto H.B. 4006, legislation passed by the Republican-controlled state legislature to dissolve the state Department of Education and the Arts. The department, contrary to its name, is not responsible for overseeing the state's K-12 educational institutions but rather focuses on preserving and reinforcing the state's cultural heritage. The department is also responsible for administering West Virginia's public libraries and public broadcasting, amongst other programs.

According to a statement released by the governor's office, Manchin approached Justice's chief of staff on Monday to inquire how she should respond to the legislation. The secretary was told to do nothing since the governor had not made a final decision on the fate of her department.

Manchin, a former First Lady of West Virginia, proceeded to ignore the directive by issuing a press release denouncing the alleged political motives behind the legislature's decision to defund her agency.

"In an obvious rush to score partisan points, the Republican state legislature passed dangerous and destructive legislation to eliminate the Office of Education and the Arts on a mostly party-line vote," Manchin said.

The secretary also attempted to exert pressure on the governor by calling on him to either veto the bill outright or work with her to dissolve the agency in a way that would not adversely impact West Virginians.

"I call on the Governor to veto this reckless and politically motivated legislation that the state legislature passed, or work with me to dissolve this agency, if that’s what he wants to do, in a responsible and compassionate way," Manchin said. "It’s obvious that there aren’t any significant financial savings here; we need to get the politics out of this."

Manchin even went a step further by offering to resign her post if it would "remove any political pressure" for dissolving her department.

"I want to sit down with the Governor, and if it helps, I’ll resign to remove any political pressure to save all of these important programs for West Virginians," she said.

"Earlier today, Secretary Manchin asked the Chief of Staff, Mike Hall, about how she should approach this. She was told by the Chief of Staff to do nothing based upon my public comments this morning, and that my decision to veto or sign this bill has not been made," Justice said. "Later in the day, she decided to defy the Chief of Staff's instructions and issued a press release. In her press release she offered to resign and remove any political cloud."

Justice also said that Manchin's actions may have inadvertently injected politics into the discussion.

"If there weren't any earlier political cloud, now there surely is one," Justice added. "She was very critical, made it political, and put me in a very, very bad position."

According to Justice, Manchin attempted to rescind her resignation upon being told it was accepted, resulting in the governor's decision to terminate her employment.

"She was told that we accepted her resignation, she refused, and we terminated her," Justice added.

Proponents of H.B. 4006 have argued that eliminating the department would save the state $750,000 annually. Efforts to eliminate the department pre-date Manchin's tenure atop the organization.

Manchin's husband, the state's Democratic senator, is up for reelection this year in a state that President Donald Trump carried by nearly 42 percentage points over Hillary Clinton during the 2016 election. 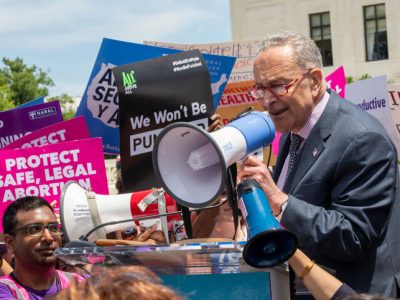