UPDATE 2:00 P.M.: Painter's committee responded following publication saying that the disclaimers are at the very end of the contribution process. The disclaimers are not on the landing page of the donation form, which is the below screenshot included in this article.

Richard Painter, the vice-chair of Citizens for Responsibility and Ethics in Washington (CREW), a left-wing ethics watchdog group that has regularly filed complaints with the Federal Election Commission, lacks the FEC disclaimers on the contribution page of his recently launched exploratory committee for a potential Senate run in Minnesota.

Painter, a self-described Republican and vocal Trump critic, announced Wednesday that he had launched an exploratory committee to test the waters on his chances to win the seat that was previously held by Democrat Al Franken.

"If I choose to enter this race, it will be to fix the problem of corruption in our government at the federal level," Painter said at a news conference.

Painter's group, CREW, has regularly filed complaints with the FEC for failures of other campaigns and committees throughout the years. However, the contribution page of his own exploratory committee's website lacks the required FEC disclaimers to solicit contributions. 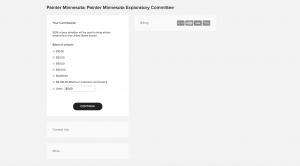 "An exploratory committee does not have registration or reporting requirements with the Commission as long as it is solely engaged in testing-the-waters activities," an FEC spokesperson said. "However, funds raised to ‘test the waters' are subject to the contribution limits under federal campaign finance laws. Moreover, the individual who is testing the waters may not accept funds from prohibited sources."

"Once an individual is no longer ‘testing the waters' and has raised or spent more than $5,000 in campaign activity, he or she is required to register as a candidate with the Commission," the spokesperson added. "Note that, when an individual decides to run for office, funds that were raised and spent to test the waters are required to be reported to the Commission. Therefore, it is prudent for an exploratory committee to comply with disclaimer requirements when soliciting contributions."

The commission reviews each possible violation on a case-by-case basis. If they deem a committee has committed a violation, possible outcomes can range from a "letter reiterating compliance obligations to a conciliation agreement, which may include a monetary civil penalty."

Painter's committee, which did not respond to a request for comment prior to publication, told the Free Beacon following publication that there is a disclaimer further in the process before any contribution is made.

Painter, a professor of corporate law at the University of Minnesota Twin Cities, has made the rounds over the past year and has become known as a vocal Trump critic. He is the current vice-chair of CREW, a liberal organization formerly led by David Brock, the founder of Media Matters who is a close ally of the Clintons.