The anonymous woman said that on three separate occassions Kihuen had touched her thighs or buttocks. She also said she received hundreds of suggestive texts from Kihuen, which she showed to the Independent.

Once, Kihuen asked the woman, "What color are your panties?" and then said he was "sad" when she didn't tell him. He also said, "My day can’t go on without knowing."

The woman said Kihuen also sent her dozens of messages on Facebook.

"I don’t think Ruben thinks what he did was wrong," the accuser told the Independent. "Like, I think he just thought he was playing around, which, I don’t think he realized the position he probably put people in."

Democratic leadership has called on the freshman congressman to resign; however, he has previously said he won't. 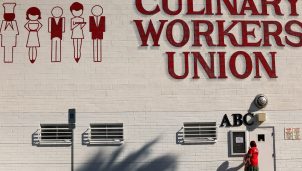 Oregon Dem Chains Himself to Mailbox to #Resist USPS Changes