The tweet in question was from Feb. 3 and read, "Yet people still believe cops are saints, and Freddie Gray killed himself. Fuck #BlueLivesMatter and all these dirty Cunt cops. You aren't a cop if you're dirty…you're a target to the criminal world. If you get killed…that's on you."

It quote-tweeted a Feb. 2 tweet by Jealous saying it was time to end the "failed war on drugs" because it had "corrupted too many police officers," linking to a story about Baltimore police corruption.

The "Ben Jealous for Governor" account "liked" the tweet, but a campaign spokesman said it was the result of a staffer's mistake. 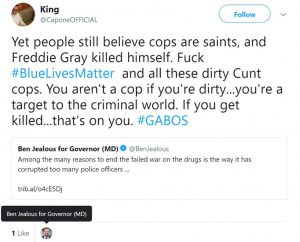 "This tweet was not liked by Ben and certainly doesn’t reflect his views on law enforcement," Jealous campaign spokesman Kevin Harris said. "As Ben has said on several occasions, he values and respects law enforcement, including the several members of his own family who have worn the badge or are currently serving."

Jealous' bid to knock off incumbent Gov. Larry Hogan (R.) does not look promising. Hogan is one of the most popular governors in the country and polls have consistently shown him holding a double-digit lead over Jealous.

Hogan has earned the endorsement of the Fraternal Order of Police, and his campaign called on his opponent to apologize.

"This sort of vulgar and divisive rhetoric is beyond troubling; it’s dangerous," Hogan campaign spokesman Doug Mayer said in a statement. "It’s outrageously unbecoming for a candidate for governor and an insult to the brave men and women in uniform who put their lives on the line every single day. Ben Jealous owes the law enforcement community an apology."