Angus King: No Evidence Yet for Public to Think Impeachment Is ‘Appropriate Path’

Sen. Angus King (I., Maine) said on Sunday's "Meet the Press" that he doesn't think there is any publically available evidence to date that would justify impeaching President Donald Trump.

"I don't think that there's evidence yet available to the public where there would be more or less a consensus that this was an appropriate path," King said.

The senator was responding to a question from "Meet the Press" host Chuck Todd about the recent filings from special counsel Robert Muller in regards to Trump's former campaign chairman Paul Manafort and Trump's former personal attorney Michael Cohen.

"Given that the government is now saying the weight of the government is behind the charges that the president helped direct Michael Cohen to commit that crime – and as you said there is still a defense there for the president, he can claim he didn't know it was a crime or at least a breaking of a campaign finance crime – Do you believe there's already enough to start an impeachment inquiry?" Todd asked. "That doesn't mean he would be impeached. In fact, is Congress almost obligated to open an inquiry at this point?

King argued impeachment would be the wrong path given the current information available.

"I don't think so. I think impeachment is entirely different from criminal prosecution. And as you know, the Justice Department made a decision years ago in an opinion that a sitting president could not and should not be indicted. And so whether the president will ever face criminal charges with regard to this matter is an open question. But impeachment essentially, Chuck, is a political issue," King said.

"My concern is that if impeachment is moved forward on the evidence that we have now, at least a third of the country would think it was just political revenge and a coup against the president. That wouldn't serve us well at all. The best way to solve a problem like this to me is elections," King added.

Todd pressed King on his view that impeachment is a political tool rather than a tool to hold the president accountable to the rule of law.

"Let me ask you this, the whole point of the impeachment process was because of this idea that you can't necessarily hold a president to the same rule of law that you can hold other individuals and that the one means to dealing with a president who commits crimes is through the impeachment process. If you don't go through it, isn't this Congress' way of saying, ‘well, yes, he committed some crimes, but politically it's uncomfortable.' So, if you're popular enough or if you have a big enough base, you can get away with committing crimes?" Todd asked.

"Impeachment is the remedy … the standard in the Constitution is ‘high crimes and misdemeanors.' It's a very high standard," King said.

"Is it? The word misdemeanor – when people say it's a high standard – ‘high crimes, and misdemeanors.' You could argue that encompasses the entire –" Todd interjected.

"I don't read it that way, and here's why," King said. "If you go back to Andrew Johnson's impeachment, the very first one back in 1867, the danger, Chuck, is that we don't want to create a precedent where a Congress of one party unseats the president of another party for essentially political reasons. If that starts to happen, if that happens, then we've changed our system. We've become a kind of parliamentary system because you're overturning the will of the voters. So I'm a conservative when it comes to impeachment. I think it's a last resort and only when the evidence is clear of a really substantial legal violation."

"We may get there, but we're not there now," King added. 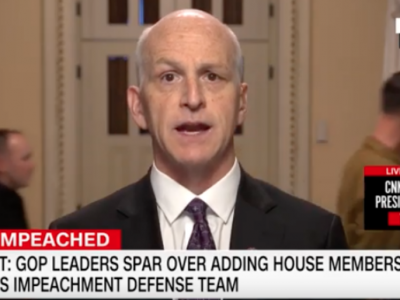