An overwhelming majority of Americans, including a third of black Americans, say they trust the police even amid nationwide protests over a Minneapolis officer's killing of an unarmed black man.

Sixty-nine percent of Americans report having a "great deal" or a "fair amount" of trust in their local police and law enforcement, according to an Axios/Ipsos poll conducted May 29 through June 1. Those figures include majority support among both parties, all age groups, both genders, and both white and Hispanic respondents, but just 36 percent support among black respondents.

The chasm between black and white respondents—41 percentage points—drew the attention of Ipsos president Cliff Young, who told Axios that the coronavirus epidemic exacerbated "a longstanding set of grievances in the African-American community with the police and how they deal with the community"—implying a worse disparity than ever.

But although the difference between white and black respondents' trust in police is substantial, a closer look at historical data suggests it is not meaningfully elevated from earlier this decade. Furthermore, the larger finding of majority trust is consistent with almost three decades' worth of data, which show that Americans support law and order and the institutions thereof—and may be growing even more supportive amid unprecedented nationwide unrest.

Those historical figures come from Gallup, which annually asks its survey subjects about their "confidence in" police and other institutions. In 2015, in the wake of protests in Ferguson, Mo., that confidence fell to its lowest level on record, with just 53 percent saying they have "a great deal" or "quite a lot" of confidence in the police.

That number recovered to historical averages two years later. The two surveys are imperfectly comparable—measuring "trust" vs. "confidence," "local police" vs. "police," and using different qualitative descriptors of each. Given those differences, however, Axios's findings suggest a recovery from the 2015-era lows across ethnicities—meaning that the police are at least as popular now as they were before the Ferguson protests. 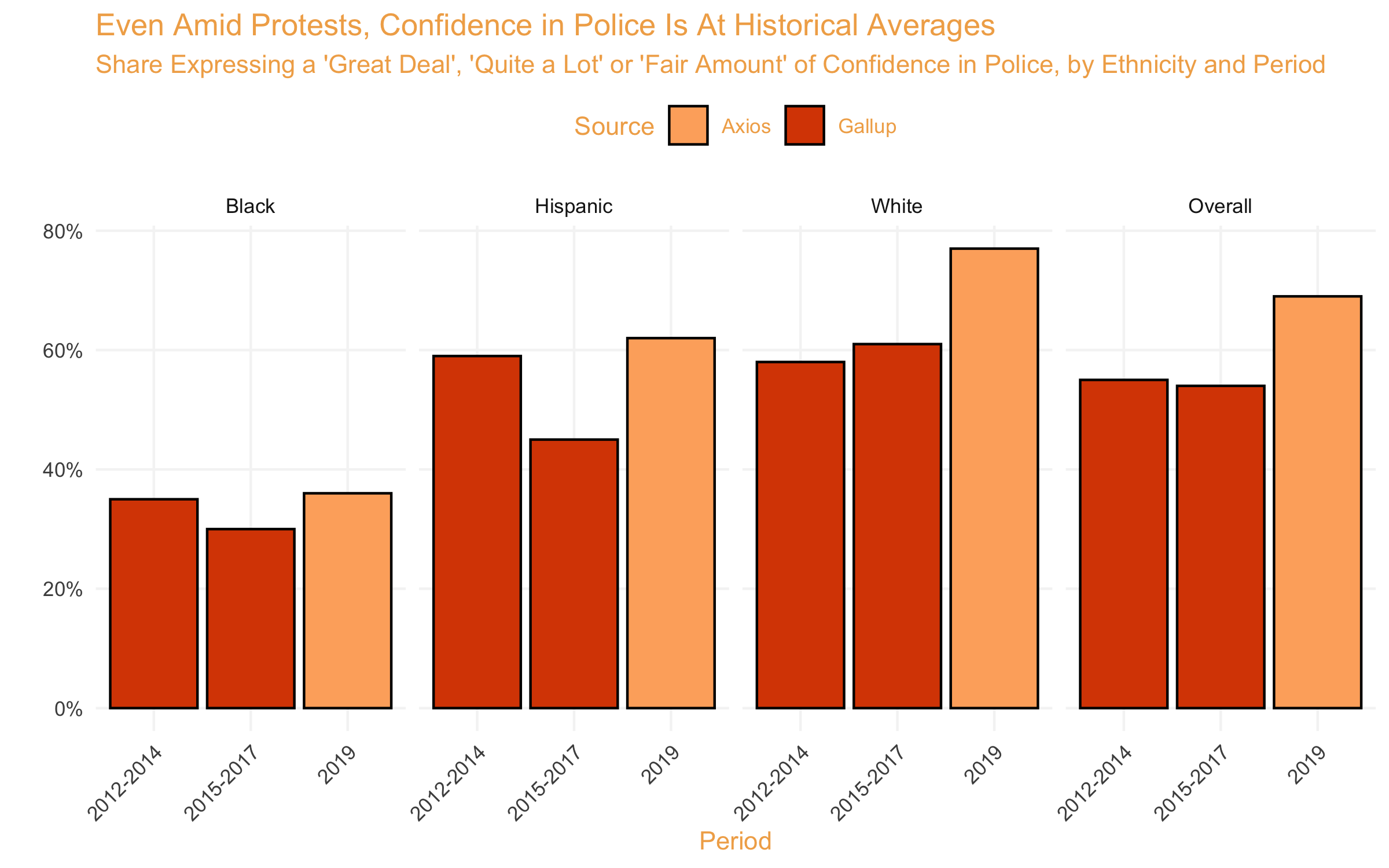 In fact, Gallup has consistently found the police to be among the most trusted institutions in America, beaten out only by the military and "small business." Organizations that routinely command less confidence include public schools, organized labor, newspapers, television news, and Congress. The "criminal justice system" commands confidence of just 24 percent, less than half of support for police. 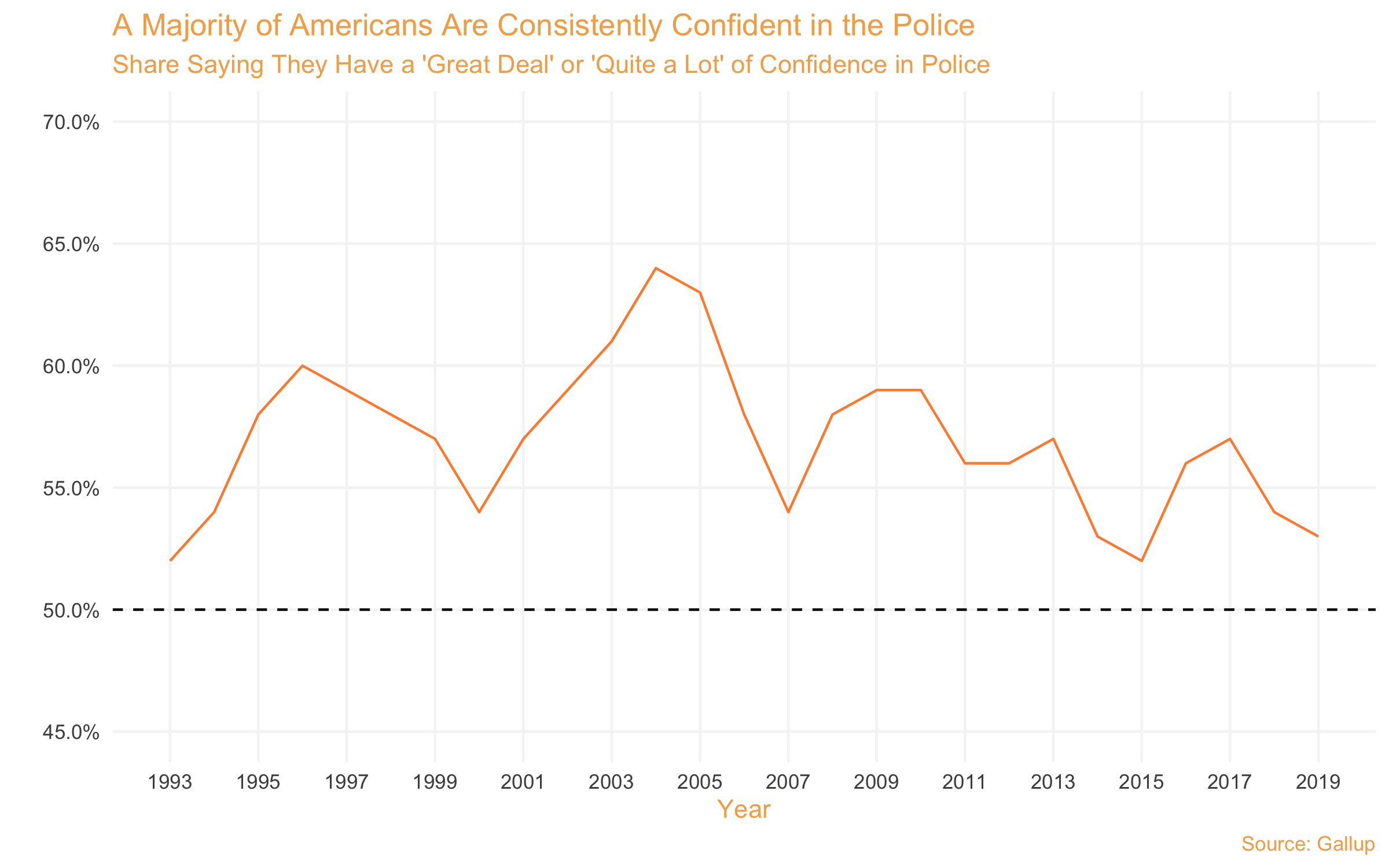 Gallup data do indicate that the police continue to struggle with trustworthiness and confidence among black Americans—although not at levels appreciably different from six years ago. At the same time, data indicate that Americans of both parties continue to be broadly supportive of law enforcement.

In fact, national unrest may be pushing Americans to be more supportive of cops. A May 31 through June 1 poll from Morning Consult found that 71 percent of registered voters "strongly" or "somewhat" support calling up the National Guard to support city police in quelling riots. That includes 42 percent of African-American respondents, 58 percent of liberals, and 62 percent of those who "strongly disapprove" of President Donald Trump's job performance.

Those figures represent a nation's response to days of protests, rioting, and looting, in which several police officers have been shot, and 77-year-old David Dorn, a retired St. Louis police captain, was shot and killed on a Facebook live stream.