The United Nations overwhelmingly voted to declare 2014 the 'International Year of Solidarity with the Palestinian People" during an unprecedented vote that human rights observers say was marred by anti-Israel fervor.

The U.N.’s General Assembly (UNGA) voted 110 to 7 to approve the resolution on Nov. 26, just a day after the measure was put forth during a controversial series of meetings to mark 2013’s 'International Day of Solidarity with the Palestinian People."

While the U.N. holds a Palestinian solidarity day each year, this is the first time that it has voted to dedicate an entire year to what it describes as the plight of the Palestinian people.

The General Assembly adopted at least three other resolutions that targeted Israel on the same day.

Jewish groups worry that the U.N. will now see a massive uptick in anti-Israel activity in 2014, as the Palestinian rights committee assumes unilateral control over meetings and events that can take place under the auspices of the solidarity year.

The 2014 resolution was passed just one day after a prominent Jewish human rights institute was controversially barred from attending events held on behalf of the 2013 day of Palestinian solidarity.

Anne Bayefsky, director of The Touro Institute on Human Rights and the Holocaust (IHRH), the group at the center of the controversy, warned that UN staff and a UN committee have now been enabled to make 2014 a 'year of excluding pro-Israel Jewish organizations from the United Nations."

Critics say the initiative is likely to exacerbate what they say is an anti-Israel bias at the United Nations, where the Palestinians have many allies in their efforts to marginalize Israel.

'The General Assembly resolution declaring 2014 as Palestinian solidarity year greatly expands the anti-Israel propaganda operation of the UN's Palestinian Division," said Bayefsky, who warned that the ban of her group is a "part of a larger political agenda to rewrite history and delegitimize Israel."

The 2014 resolution was only opposed by Israel, the United States, Australia, Canada, Micronesia, and several others. Fifty-six member nations abstained form the vote.

'U.S. taxpayers have paid over half a billion dollars renovating U.N. Headquarters in the middle of New York City, and yet the Obama administration has ceded access to public meetings therein for the first time ever to the UN Division for Palestinian Rights," Bayefsky said. 'It's an outrage, and must be challenged immediately."

"The United States strongly supports the principle of non-governmental organization participation at the United Nations and will continue to engage on this issue," said Erin Pelton, a spokesperson for the U.S. Mission to the United Nations.

Daniel S. Mariaschin, executive vice president of B’nai B’rith International (BBI), a Jewish group with a strong presence at the United Nations, said that the 2014 resolution is part of a larger campaign to delegitimize Israel on the world stage.

'We in the Jewish community, organization, and friends of our community, will need to redouble our efforts" to correct the narrative about Israel, Mariaschin told the Free Beacon. 'This is one example of something we’ll certainly be pushing back against, educating, and engaging in our advocacy activity."

The resolution designating 2014 as the year of Palestinian solidarity orders that a series of 'activities" be held throughout the year.

These activities and meetings will be organized by the Committee on the Exercise of the Inalienable Rights of the Palestinian People (CEIRPP), which will also be in charge of determining who gains access.

The CEIRPP was also in charge of determining access when the IHRH—an officially accredited U.N. non-governmental organization—and 18 pro-Israel Jews were barred from attending this year’s Palestinian solidarity day.

U.N. security officials initially granted the IHRH credentials permitting 18 Birthright Israel alumni to attend the daylong series of meetings. However, the credentials were revoked less than a day later after the CEIRPP objected, according to emails obtained at the time by the Free Beacon.

Bayefsky cautioned that 'unless something is done now" the CEIRPP and the U.N. Palestinian Division can be expected to allow only 'hand-picked, anti-Israel members of civil society" to attend any U.N. public meeting labeled a solidarity event in 2014.

The Division for Palestinian Rights, which will act as the gatekeeper to meetings held under the 2014 resolution, ultimately did not allow the IHRH and 18 pro-Israel Jewish individuals to attend this year’s meetings.

Photos taken on the day of the event show that over-crowding was not an issue, as some had claimed it would be, and that just two flags were erected at the front of the room used for the meetings: The official U.N. flag and one representing the 'State of Palestine." 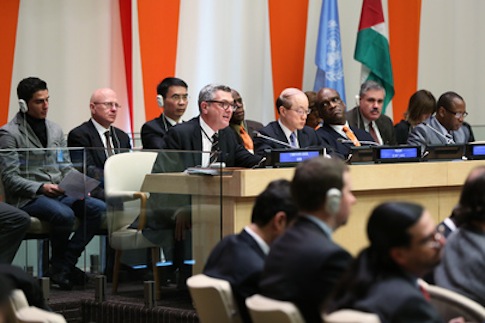 The U.N. meeting room was decorated with several panels purporting to outline the Arab-Israeli conflict. It included a display claiming that there are 11 million Palestinian refugees, a number disputed by many, including members of Congress.

Israel’s flag was not present in the room even though the day of solidarity is meant to highlight the international body’s commitment to a two-state solution in the Middle East.

Speakers at the event included Filippo Grandi, the commissioner-general of the UN’s Relief and Works Agency for Palestine Refugees (UNRWA) and Methodist Church representative David Wildman, who advocated in favor of the Boycott, Divestment, and Sanctions (BDS) movement that wages economic warfare on Israel.

Wildman invited 'all member states" to join the BDS movement and accused Israel of apartheid in his remarks.

UNRWA’s Grandi blamed Israel for the plight that some Palestinians face in Syria, where a years-long civil war continues to kill civilians.

Grandi also implied that Israel’s creation is 'the original injustice" in the Middle East.

BBI’s Mariaschin said that Jewish groups are facing an uphill battle at the U.N.

Israel-centric resolutions and meetings are 'part and parcel of the infrastructure in the U.N., which puppets the Palestinian narrative," he said.

'There’s a lot going on that needs to addressed," Mariaschin said. 'No question."