A plan to build a rail line in Afghanistan developed by U.S. personnel has Iran as its "preferred destination for mineral exports," according to a top U.S. government oversight official.

The U.S.-backed rail would facilitate trade with Iran and potentially bring Afghanistan $54 billion in revenue from 2017 to 2040, according to the Special Inspector General for Afghanistan Reconstruction (SIGAR), which issued its latest oversight report to Congress on Tuesday.

The national railway plan for Afghanistan was developed by "U.S. government civilian and military personnel" who worked in tandem "with representatives of the railway industry and academia," according to SIGAR.

"Iran is the preferred destination for mineral exports because the route is more efficient and Iran’s rail infrastructure is in better condition than Pakistan’s," SIGAR found.

The rail would "expand trade between the Central Asian Republics and Iran" by up to "3 million metric tons a year from 2017," and also would boost "commercial rail traffic between Iran, China, and Europe," according to the report.

U.S. planners expressed no hesitation about the plan despite the West’s chilly relations with Iran and its ongoing efforts to sanction the rogue regime’s exports and imports.

Iran is in the process of building a nuclear weapon, efforts which the West is trying to stop through economic sanctions.

"The rail plan describes its recommendations as economically viable, and technically and financially feasible, yet sensitive to multiple risk elements which it says the plan mitigates to an acceptable level," SIGAR’s report said.

While it is unclear just how much profit Iran would make on the deal, the rail planners believe that "operations revenues from mineral transport have the potential to reach $54 billion from 2017 to 2040 and for government revenues from royalties and taxes to reach $45 billion in that same period," according to the report.

The rail lines would carry mainly minerals. Afghanistan is believed to have nearly $1 trillion in untapped mineral deposits, according to reports.

"Afghanistan [should be] leveraging its vast iron-ore and copper resources for sustainable economic growth and for the railway’s commercial viability," according to the U.S. and Afghan rail planners.

"Mining is expected to account for about 76 percent of total rail freight traffic," according to SIGAR. 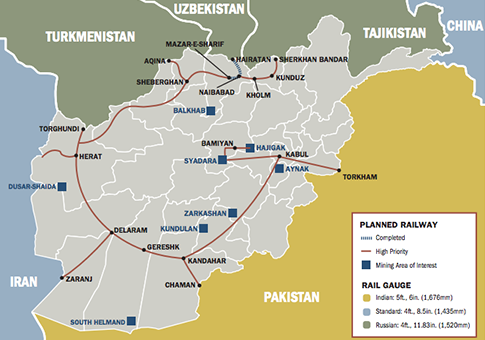 The southern route would be built "in proximity to major mining areas that can transport mineral freight to seaports in Iran and Pakistan for shipments to global markets using standard-width rail gauge," according to SIGAR.

The northern route would use a "Russian rail gauge that can transport commercial freight," according to the report.

However, "the southern line is expected to be more economically viable, bringing in a potential $56.1 billion in revenue from 2017 to 2040."

While the northern line is expected to bring in revenue of about $12.6 billion, "both lines facilitate trade with Iran," according to SIGAR.

As the United States makes renewed diplomatic overtures to Tehran, "future developments in U.S. policy toward Iran could, obviously, affect the prospects for both aspects of the rail plan," SIGAR reported.

Afghanistan currently has "no meaningful railroad development, operational experience, or capacity," according to SIGAR.

The country has just one rail line.

If Afghanistan does not boost its economic revenues it will not be able to fund U.S. reconstruction projects and its security infrastructure, SIGAR warned.