The United Kingdom charged two men on Wednesday with the poisoning of Sergei Skripal, a double-agent who formerly served in Russian military intelligence and spied for the West.

Prime Minister Theresa May said the attack, which took place in Salisbury and left Skripal and his daughter seriously ill, was likely approved "at a senior level of the Russian state."

The U.K. does not expect Russia to hand over the men, Alexander Petrov and Ruslan Boshirov, who U.K. officials say work for Russian military intelligence, according to the Associated Press. Russia denies involvement in the poisoning, but May said it "was not a rogue operation."

Petrov and Boshirov have been charged in absentia with conspiracy to murder and attempted murder through the use of a lethal nerve agent. 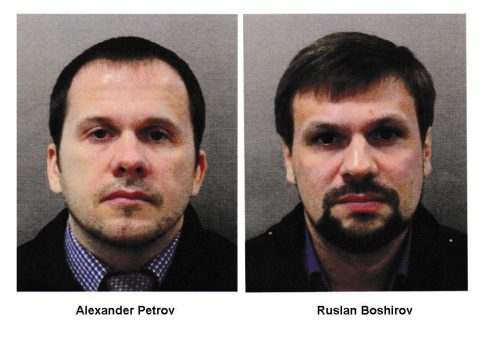 Britain will not seek the extradition of the two men, but it has obtained domestic and European arrest warrants, which means the men could be arrested if they leave Russia.

A former colonel in Russia’s military intelligence (GRU), Skripal was arrested in 2006 on charges of spying for Britain. He was freed from prison during a spy swap in 2010 and moved to the U.K.

Skripal and his daughter were found unconscious on a bench in Salisbury in March, and spent weeks hospitalized in critical condition. They were exposed to Novichok, a nerve agent developed by the Soviet Union.

Dawn Sturgess, a British woman unrelated to Skripal, died in July after being exposed to the same nerve agent.

Skripal’s poisoning led to a wave of diplomatic expulsions in Europe and the United States. Last month, the United States implemented new sanctions on Russia and demanded it refrain from using chemical and biological weapons. The sanctions will limit U.S. aid to Russia, and additional sanctions could affect Russia’s banking sector.