The U.S. Strategic Command, meanwhile, is conducting a similar nuclear command and control exercise, but without firing any nuclear missiles.

The Russian exercise was closely monitored by U.S. intelligence agencies and was conducted in greater secrecy than past nuclear war games have been, according to officials and military analysts.

The Russians also practiced firing an air-launched cruise missile during the Oct. 30 maneuvers.

The Kalibr is an intermediate-range land-attack cruise missile that was first used by Russia in combat in Syria against rebel forces last month.

"Overall, they were more secretive than they have been in the past about this exercise," Schneider said. "It was announced by the Russian defense ministry, not the Kremlin and fewer details were provided."

A ministry statement said the exercise practiced "the reliability of relaying combat-training orders and signals along the entire command and control vertical, from the Russian national defense control center to the command posts of formations and military units."

The SS-25 was fired from the Plesetsk launch site some 500 miles north of Moscow. 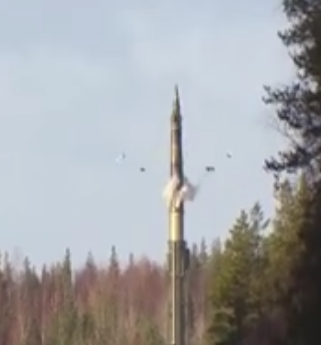 Submarine missiles were fired from the Barents Sea near Norway and the Sea of Okhotsk in the Pacific.

A missile warship in the Caspian launched a Kalibr cruise missile at a training target, and Tu-160 Blackjack bombers fired cruise missiles at target ranges in northeastern Russia and on the Kamchatka Peninsula in the Russian Far East.

A short-range Iskander cruise missile was launched against a target in the Kapustin Yar range near the border with Kazakhstan.

A 3-minute, 44-second video of the exercises was posted on the Russian Defense Ministry Facebook page.

Schneider said the use of long-range non-strategic cruise missiles, including the Kalibr, was new for the Russians. Another new strategic missile thought to be strictly conventional was the R-500 ground-launched cruise missile.

"The use of these missiles in a strategic nuclear exercise tends to confirm Russian press reports that they are both nuclear capable," he said.

The R-500 reportedly has a range of 620 miles or more, making it a possible violation of the 1987 Intermediate-Range Nuclear Forces Treaty, Schneider said.

"If it is a ‘high-precision long-range weapon’ as the Russian say, it clearly would violate the INF Treaty," he said. "The Obama administration has not reached this judgment yet but it hardly wants to find more Russian INF Treaty violations."

"The United States’ ability to maintain a safe, secure, effective and credible nuclear deterrent is foundational to our national security and contributes to the security of our allies and partners," said Adm. Cecil D. Haney, the commander of Strategic Command, in a statement.

"This exercise, and our continued focus on maintaining key capabilities and skills, ensures U.S. Stratcom’s strategic forces remain ready, 24/7, providing flexible and credible options for the president and the Department of Defense."

The exercise, held with the U.S.-Canada North American Aerospace Defense Command, is being held along with another Arctic-focused exercise called Vigilant Shield, taking place in several locations in North America.

Unlike the Russian nuclear war games, the details of this exercise are secret, a Stratcom spokesman said.

A statement said the exercise checks readiness and validates "the ability to identify and mitigate attacks across all of U.S. Stratcom’s mission areas, with a specific focus on cyber, space, missile defense and nuclear readiness."

Training requires military components, including task forces and command posts, to evaluate the ability of nuclear forces "to deter, and if necessary, defeat a military attack against the United States and to employ forces as directed by the president."

"To ensure resilience, redundancy and survivability of our nation’s strategic deterrent forces, the scenario for Global Thunder integrates nearly every conceivable strategic threat to our nation and calls upon all the U.S. Stratcom capabilities that would be provided to geographic combatant commanders in a real-world crisis: space, cyber, intelligence, surveillance and reconnaissance, global strike, and ballistic missile defense capabilities," the command statement said.

"As a matter of policy, we do not discuss the details of specific operations associated with exercises," he said.

Congress: US Must Stop Funding ‘Horrific’ Animal Experiments in Russia