ISIL vows to ‘fight the barbaric Jews’ in ‘Palestine’

The Islamic State of Iraq and the Levant (ISIL or ISIS) promotes the stoning of women, targets "the enemy" Sen. John McCain (R., Ariz.), and vows to bring its violent campaign to Israel in the latest issue of its propaganda magazine, Dabiq.

As ISIL continues to wage war across Iraq and forcefully promulgate its extremist version of Islam, the group’s public relations arms is making an effort to justify the terror group’s violent campaign and bloody public executions.

The magazine, published by the Al-Hayat Media Center, ISIL’s PR wing, mandates the forced conversion to Islam for people across the globe and demands that all Muslims pledge allegiance to ISIL leader Abu Bakr al-Baghdadi, who has announced that he is the caliph, or leader, of the new Muslim state in Iraq.

The latest issue—which contains photos of those ISIL has executed and of the new arms the group has seized—comes as the Obama administration is pushing Congress to repeal the U.S. war authorization in Iraq, a move that would assure U.S. troops do not intervene in the conflict.

ISIL leaders offer public comments on the conflict between the Israelis and Palestinians and vow to expand the terror group’s reach to "Palestine," where it will "fight the barbaric Jews."

"As for the massacres taking place in Gaza against the Muslim men, women, and children, then the Islamic State will do everything within its means to continue striking down every apostate who stands as an obstacle on its path towards Palestine," one article states.

"It is not the manner of the Islamic State to throw empty, dry, and hypocritical words of condemnation and condolences like the [Arab nation] do in the [United Nations] and Arab League," the article continues. "Rather, its actions speak louder than its words and it is only a matter of time and patience before it reaches Palestine to fight the barbaric Jews and kill those of them hiding behind the Gharqad trees—the trees of the Jews." 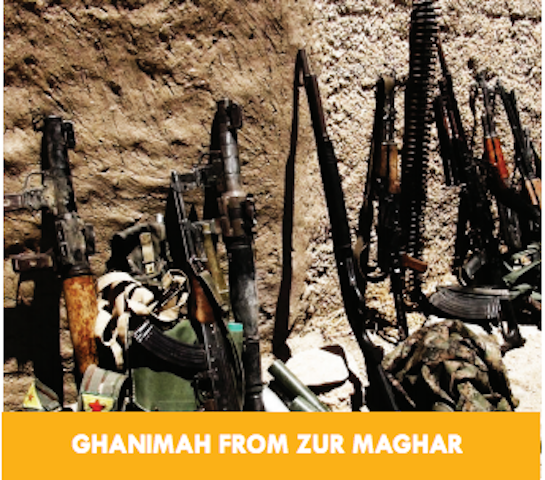 The magazine also features a photo spread of ISIL’s execution campaign and recent stoning of women who committed adultery.

"The hadd [punishment] of stoning is carried out on a woman for committing adultery," reads a caption above the pictures. 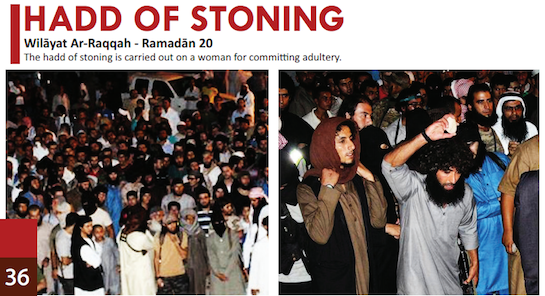 Also featured is a picture of dead pro-Iraq government fighter that ISIL claims to have executed in Iraq.

"The mujahidin executed a captured member of the Rāfidī "Badr" militia," or Iraqi army, the caption reads. "Just days before, "Badr fighters were killed in clashes with the Islamic State in the town of Bashīriyyah." 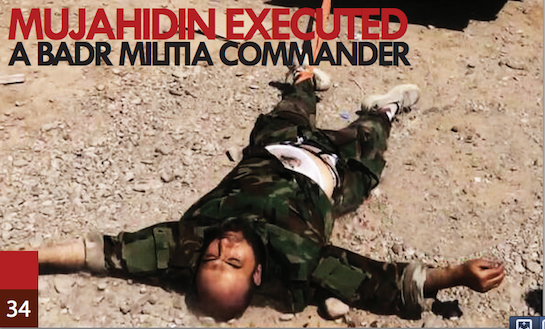 The magazine includes a two-page spread on "the enemy" and "crusader" McCain, who ISIL accuses of spearheading the "invasion of Iraq."

"I was proud to be sanctioned by Vladimir Putin earlier this year, but to be targeted by ISIL as the ‘enemy’ and ‘crusader’ is a true badge of honor," McCain said in an emailed statement. "ISIL is the most dangerous Islamic extremist terrorist group in the world, and now maintains the largest terrorist sanctuary in history between Iraq and Syria, where it has killed thousands. The Director of National Intelligence, the Director of the FBI, and the Secretary of Homeland Security have all warned that ISIL poses a direct threat to the United States, and Attorney General Eric Holder recent called the ISIL threat to America ‘more frightening than anything I think I've seen as attorney general.’ I will never cease my efforts to advance the values of freedom, democracy and human rights in the Middle East and around the world, and to counter groups like ISIL which offer nothing but darkness, extremism and terror."

Additionally, the magazine includes a long feature piece that attempts to justify the forced and violent conversion of people to Islam.

"Until we return to the correct state of Islamic affairs, it’s upon us all to work together to eradicate the principle of ‘free choice’ and to not deceive the people in an attempt to seek their pleasure, neither by calling to ‘free choice' directly, nor by alluding to it indirectly," the article states.

"Rather, we must confront them with the fact that they’ve turned away from the religion, while we hold onto it, grasping its purity, its clarity, its comprehensiveness, without any blemishes due to shirk, misguidance, or heresy," the article reads.

"We’re completely ready to stand in the face of anyone who attempts to divert us from our commitment to making the religion of Allah triumphant over all other religions, and that we will continue to fight the people of deviation and misguidance until we die trying to make the religion triumphant," it says.

Muslims from around the world are instructed to join the Islamic state in Iraq and devote allegiance to ISIL leader al-Baghdadi.