House Majority Leader Kevin McCarthy (R., Calif.) announced a North Korea sanctions bill being voted on Tuesday will be named in honor of Otto Warmbier, the college student who died this year after being detained by the rogue regime.

"We are going to honor Otto Warmbier, the 22-year-old University of Virginia student who was brutalized and tortured by the [Kim Jong Un] regime," McCarthy said.

Warmbier was arrested by North Korean authorities in January of 2016 and sentenced to 15 years of hard labor for taking down a propaganda poster while he was visiting. While Warmbier was held prisoner after what was described by human rights activists as a show trial, his parents solicited the U.S. government to secure his release.

He was eventually sent back to the U.S. in a comatose state in June and died shortly after. His parents said it was clear when they saw him that he had brain damage and been tortured by the "terrorists" in North Korea.

Rep. Andy Barr (R., Ky.) is sponsoring the bill, and he said in a statement that the legislation will impose the most far-reaching sanctions ever enacted against North Korea.

"For more than two decades, foreign aid and half-hearted sanctions have been deployed in vain to thwart the Kim regime’s ambitions, a strategy of ‘strategic patience’ that has proven highly ineffective," Barr said.  "That is why I have introduced this legislation that would, if enacted, impose the most far-reaching financial sanctions ever aimed at North Korea. In addition to bringing about an economic reckoning for Pyongyang, these sanctions will strengthen the American negotiating position by sending a strong signal to North Korea and its enablers that the status quo is unacceptable."

His release goes on to say:

H.R. 3898 would punish foreign financial institutions for dealing with virtually anyone facilitating North Korea-related business, an incentive for traders, middlemen, and others to give up activities that ultimately strengthen the Kim regime. In addition, the bill targets foreign banks that deal with North Korean laborers, more than 50,000 of whom have been sent abroad to amass hard currency. Up to 90 percent of these laborers’ wages are confiscated by the North Korean government for this purpose, bringing Pyongyang an estimated $300 million each year. 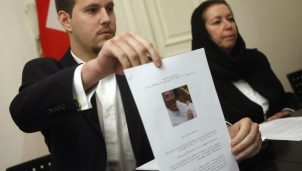 McCarthy: Swalwell Should Be Removed From Congress For Ties to Chinese Spy