The U.S. Army is moving to enhance its long-range precision fire capabilities to ravage adversaries from a greater distance following the Trump administration's decision to pull out of a Cold War-era arms control pact, Army Secretary Mark Esper said Thursday.

Esper told an audience at the American Enterprise Institute in Washington that the development of long-range missiles and cannons had become the Army's "No. 1 priority" in modernizing the service for high-intensity combat against near-peer competitors like Russia and China.

Anticipating the prospect of a U.S. withdrawal from the Intermediate-Range Nuclear Forces treaty, or the INF, the Army has already begun pursuing programs to field long-range weapons capable of hitting distances that would violate the pact.

The INF treaty bars the United States and Russia from possessing ground-based ballistic missiles with a range of 500 to 5,000 kilometers (300 to 3,400 miles). Today, the Army's longest-ranging ground missile has a range of roughly 180 miles, but the service has been pursuing long-range artillery that can hit targets over 1,000 miles away.

"The more range you have the better because you can strike with impunity with great effect and that's what we want to achieve against any adversary is overmatch," Esper said. "We want to be able to outrange and outgun them and that's what [long-range precision fires] gives us, whether it's a missile or cannon."

Esper said long-range precision fires are "critical" to multi-domain operations, providing the Army with the ability to shoot at great distances to support either the Air Force "by suppressing enemy air defenses at hundreds and hundreds of miles" or the Navy "by engaging enemy surface ships at great distances."

Col. John Rafferty, director of the Army's long-range precision fires cross-functional team, made similar comments to reporters in October, saying these efforts get at "the fundamental problem of multi-domain operations, which is one of access."

"What we're charged to do is to establish overmatch at echelon that will enable us to realize multi-domain operations by knocking out the systems that are designed to create standoff—to separate us," Rafferty said. "So the long-range fires are the key to reducing the enemies' capability to separate our formations."

The INF was considered a critical step in diffusing the Cold War at the time of its signing in 1987, but the future of the pact has been in question in recent years. The Obama administration first charged that Moscow breached the treaty in 2014 and it has received extensive scrutiny from top military officials.

In testimony before the Senate Armed Services Committee earlier this year, former U.S. Pacific Command chief Admiral Harry Harris said China has the "largest and most diverse missile force in the world, with an inventory of more than 2,000 ballistic and cruise missiles." Harris, who now serves as the U.S. ambassador to South Korea, said that nearly 95 percent of those missiles would violate the INF if Beijing had to comply.

Critics of Trump's decision, including the European Union, warn a U.S. withdrawal could provoke a nuclear arms race.

Esper refused to speculate about the potential of creating instability in Europe should the United States deploy long-range missiles to the continent.

"I can just tell you what we need in terms of an army to perform our mission," he said. "This would give us a great capability." 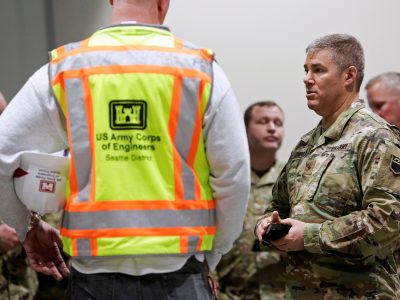