Affiliates of the Islamic State terror group are distributing a new handbook aimed to help Western jihadis avoid capture by the police and train them to clandestinely build bombs and transport weapons, according to a review of the guide, which is being distributed across the Internet as an e-book.

The handbook, "How to Survive in the West," instructs Western jihadis on how to blend into their societies and hide their terror activities. This includes hiding their belief in Islam and keeping any weapons-related work confined to their homes, according to the guide, which was analyzed by the Middle East Media Research Institute (MEMRI).

The chapter of the manual focusing on homemade bomb-making provides tips on how to assemble cellphone detonators and other types of secret explosives.

The handbook "explains that while al Qaeda in the Arabian Peninsula taught its readers how to make three different types of bombs, whereas this chapter ‘will focus on six different types: Molotov cocktail, nail bomb, microwave airbag bomb, gas canister bomb, remote controlled bomb, and car bomb,’" according to excerpts of the guide provided by MEMRI.

The accused Boston marathon bombers, Tamerlan and Dzhokhar Tsarnaev, are hailed as a model for Western jihadists.

"The book explains that the microwave airbag bomb was used by the Tsarnaev brothers in their attack on the Boston marathon, and that their bag contained: ‘A mini microwave oven, car airbags (containing sodium azide) or aerosol, [propane] spray cans placed in the oven, nails/sharp rocks/metal balls (shrapnel) put in the microwave oven, and a timer,’" according to the chapter on bomb-making.

A step-by-step guide on how to construct a cellphone detonator also is included. 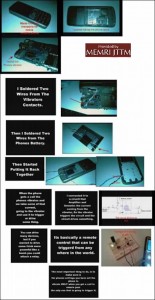 "The principle in this is simple," the handbook states. "Buy two cheap cell phones, wire one up to explosives (like leaking gas in a fully closed car) and use the other as a detonator by simply ringing the phone wired to the explosives. The mujahideen use this technique all around the world. It keeps you safe because you can be far away when activating the device, and it is easy to make!"

Another section of the terror guide provides tips on the best ways to secretly transport weapons. Western terrorists reading the guide are encouraged to mimic drug smugglers and other types of gangs.

After buying weapons, transporting the weapons and huge sums of cash/jewelry from one location to another in the boot of the car can be dangerous and will give you a long-term jail sentence. You could be jailed for smuggling, laundering and dealing in arms. The best method gangs have used throughout the world is to take your car to a garage, and make hidden compartments within the bodywork of the car. These hidden holes are usually made within the car body's interior, since security services and border guards simply do not have enough time or equipment to search all cars for hidden compartments. Gangs place bags of money, drugs, and weapons within these hidden compartments. They then ask the lower ranked "transporters' in their gangs to deliver and transport this car from one country or city to another without fear of being detected.

"By not showing you're Muslim, you've already excluded yourself being in the ‘Terrorist watchlist,’" the guide states. "Don't make it too obvious you have become a practicing Muslim."

Men are told to not grow beards and women are encouraged to avoid wearing a hijab in public.

"When a Muslim goes out in public, he wants to fit into society to make himself look as normal as possible. Remember this isn't because he fears his Islamic identity, but he is doing this so he is not suspected of being an outsider enemy," the guide says.