Iran possesses the "largest number of ballistic missiles in the Middle East" and is secretly producing long-range missiles capable of carrying a nuclear payload, according to a nonpartisan report authored by Congress’ research arm.

It is suspected that Tehran’s space program "could mask" the development of an intercontinental ballistic missile (ICBM) capable of carrying a nuclear warhead to targets across the region.

Iran is "developing and producing medium-range ballistic missile (MRBM) capabilities with ranges estimated up to about 2,000 kilometers (with some non-U.S. government sources citing slightly higher ranges), sufficient to strike targets throughout the Middle East," the report states. "U.S. intelligence assessments state such missiles are inherently capable of carrying a nuclear warhead."

Missiles of this sort are also capable of striking United States assets in the region, as well as any city in Israel.

"Congress is considering the deployment of a ballistic missile defense site on the East coast to defend against possible Iranian ICBMs," according to the report.

A provision allocating $103 million to the development of this system by 2015 is included in the House’s fiscal year 2013 defense authorization bill.

The report further suggests that Western economic sanctions have failed to fully stymie the regime while frustrating Tehran’s nuclear bid.

"Export controls and sanctions have made it increasingly difficult, but certainly not impossible, for Iran to acquire the best of such items," the report notes.

Iran has successfully skirted sanctions by exploiting weaknesses in the law and by finding "foreign sellers willing to circumvent those laws," according to the CRS report, which was authored by missile defense specialist Steven Hildreth.

Tehran also has boosted its air defense capabilities—which include new anti-aircraft missile systems—in an effort to protect its weapons caches against an attack by the U.S. or Israel.

"Although it is not certain that Iran has made the decision to develop a nuclear weapon, it is taking steps to drastically reduce the time needed to obtain nuclear weapons should a decision be made to do so," the report states.

Iran operates multiple development facilities across the country as another line of defense against a preemptive strike by the West.

"Iran is pursuing its missile and space programs with development and testing facilities that are scattered throughout the country," according to the CRS report.

Economic sanctions have forced the regime to innovate its own military technology.

"Over the past few decades, Iran has progressed from relying entirely on the outright purchase of ballistic missile systems to becoming nearly self-sufficient in important ways," according to CRS. "Many now see Iran as a potential supplier to other nations or actors."

Reports indicate that its military has had substantial success in building advanced weaponry.

"Iran has grown increasingly self-sufficient in the production of [short range ballistic missiles] but it still probably relies on others for some key components," according to CRS. "The vast majority of Iran’s heavy artillery rockets and ballistic missiles are short-range of less than about 500 kilometers." 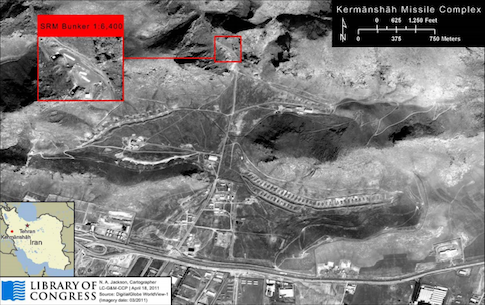 Iran’s space program remains the most secretive and puzzling aspect of its military program.

The U.S. suspects that Tehran aims to launch "intelligence gathering satellites into orbit."

Observers remain most concerned about the potential development of an ICBM that could carry a nuclear warhead to either Europe or America.

"Many believe Iran’s space launch program could mask the development of an intercontinental ballistic missile (ICBM)—with ranges in excess of 5,500 km that could threaten targets throughout Europe and even the United States if Iran achieved an ICBM capability of at least 10,000 km," the report states.

"Since 1999, the U.S. Intelligence Community (IC) has assessed that Iran could test an ICBM by 2015 with sufficient foreign assistance, especially from a country such as China or Russia," the report states.

Current estimates put the date of a potential test later than 2015 due to setbacks resulting from economic sanctions and waning support from China and Russia.