Free speech and U.S. Embassy under attack in Egyptian capital

Protesters today stormed the gates of the U.S. Embassy in Cairo, Egypt and shredded and burned an American flag as demonstrations against a film produced by Egypt’s Coptic Orthodox Church escalated.

Egyptian protesters scaled the walls of the U.S. embassy in Cairo on Tuesday and pulled down the American flag during a protest over what they said was a film being produced in the United States that insulted Prophet Mohammad, witnesses said.

"In place of the U.S. flag, the protesters tried to raise a black flag with the words ‘There is no God but Allah and Mohammad is his messenger,’ a Reuters reporter said.

"Once the U.S. flag was hauled down, protesters tore it up, with some showing off small pieces to television cameras. Then others burned remains."

The U.S. Embassy confirms that all diplomatic personnel had been removed from the premises ahead of the scheduled protests and there are no current reports of injuries to embassy staff.

In response to the protests, the U.S. Embassy issued a statement condemning the filmmakers for inciting the violence and for "hurting the religious feelings of Muslims."

The Embassy of the United States in Cairo condemns the continuing efforts by misguided individuals to hurt the religious feelings of Muslims – as we condemn efforts to offend believers of all religions. Today, the 11th anniversary of the September 11, 2001 terrorist attacks on the United States, Americans are honoring our patriots and those who serve our nation as the fitting response to the enemies of democracy. Respect for religious beliefs is a cornerstone of American democracy. We firmly reject the actions by those who abuse the universal right of free speech to hurt the religious beliefs of others.

The embassy has yet to issue a statement either condemning violence, or trespassing, or the destruction of the American flag by Muslim extremists on the 11th anniversary of the attacks on America.

Yet the embassy did follow up its statement blaming Christian filmmakers for inciting Muslim violence by showering praise on Islam. 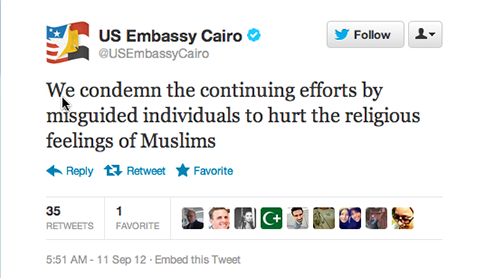 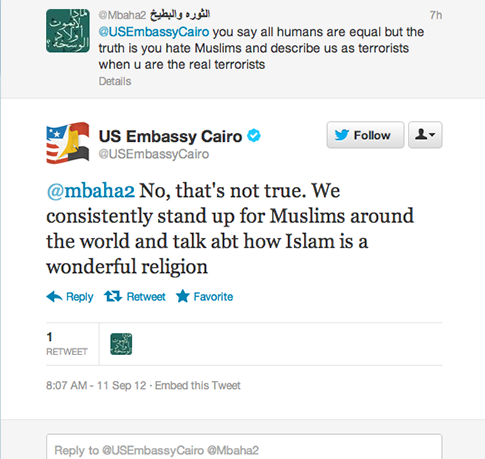