A former top U.S. commander in Iraq claims that the Obama administration and the State Department have been running an "information deception campaign" aimed at covering up crimes and violent acts committed by Iraqi Prime Minister Nouri al-Maliki.

The Obama administration’s efforts to protect and defend the Maliki government created the conditions allowing the terror group Islamic State of Iraq and the Levant (ISIL or ISIS) to take hold in Iraq, where a "civil war" has "already begun," according to the former U.S. commander Col. Wesley Martin.

Martin, who served as the senior antiterrorism and force protection officer for all Iraqi coalition forces, told the Washington Free Beacon in an interview that the White House should be blamed for backing Maliki and fostering the conditions that permitted ISIL to gain support.

"This administration has been so determined to make the Maliki administration work that they’ve been denying the truth," said Martin, who also served as a detention operations chief and base commander at Ashraf. "The peace has been lost for quite a while now."

ISIL continued to make military inroads over the weekend in northern and western Iraq and has declared the successful establishment of an Islamic caliphate.

With unfailing U.S. support, the Maliki government "established a criminal organization far more greedy, corrupt, and brutal than Al Capone could ever have hoped to achieve," according to Martin, who recently published a multi-page Iraq Threat Assessment, a copy of which was obtained by the Free Beacon.

"No matter what Nouri al-Maliki has done to his fellow countrymen, he has had the unfailing support of two governments: the United States and Iran," Martin wrote in the threat assessment. "While U.S. mainstream media was asleep at the switch and all this was going on, the U.S. State Department was operating an information deception campaign in support of al-Maliki."

Crimes, corruption, and ethnic violence was covered up by the State Department and ignored by the U.S. media, according to Martin, who was in Paris last week to participate in a conference organized by the Iranian opposition group People's Mujahedin of Iran.

The Obama administration "should not have been supporting Maliki," Martin said in the interview. "Maliki has been allowed to get away with this stuff for so long and our administration has looked the other way."

U.S. support for Maliki’s government eroded American credibility with Iraqi citizens and paved the way for ISIL to seize power with minimal resistance, according to Martin.

ISIL "took hold because they were such a disgruntled, hostile group that was experiencing genocide," he said, referring to ethnic Sunni Arabs in Iraq. "There was a spark."

Iraqis in the Western portion of the country and elsewhere "got fed up with Maliki," Martin said. "They were being kidnapped, starved, everything that should not have happened under a legitimate government was happening. And all it took was one spark. And really the spark started with Maliki manipulating the [most recent] elections," in which Maliki’s governing coalition enjoyed a commanding victory.

"Barack Obama called [Maliki] and congratulated him before the counting was done," Martin said. "What is this? The guy is illegally going after a third term as prime minister, he has totally manipulated the election, and now you’re calling him to congratulate him? The people reached a point. ISIS saw this and were able to come in with a few hundred people" and seize control.

The Obama administration also has misled the public about ISIL’s extremist presence in northern and western Iraq, Martin claims.

While ISIL has successfully seized many cities and jurisdictions, it has done so with the backing of moderate Iraqis who support the overthrow of Maliki.

"Despite what al-Maliki and the Obama administration claims, the majority of the fighters in northern and western Iraq are not religious extremists or, in this case, the Islamic States of Iraq and Syria," Martin wrote in the threat assessment. "Elements are clearly there, but valid statistics do not support the proclamation that all these communities are falling to the ISIS."

"The communities and tribes are in revolt against the corruption and genocide performed by Nouri al-Maliki," according to Martin.

"Western governments and media claimed that the ISIS slogan ‘We have a score to settle’ referred to the execution of Saddam. It did not," Martin wrote. "It pertained to atrocities against the Sunni population by the government of Nouri al-Maliki."

"The Obama administration may wish to turn a blind eye to the atrocities of Nouri al-Maliki; however, citizens of the Middle-East know better," he wrote.

"Civil War in Iraq has already begun" as a result of these policies, according to Martin.

"If proper action is not taken immediately, it will not be long before a Reign of Terror commences," Martin warned. "Religious extremists and criminals will be raiding communities and mass murder will be the result." 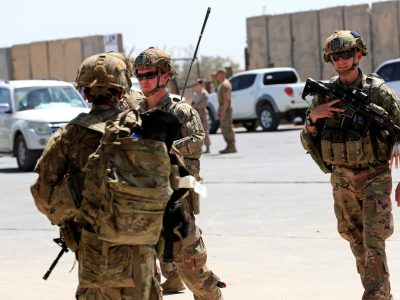