University of California Los Angeles students are demanding that professors cancel or extend final exams for minority students in light of the death of George Floyd and some are pressuring the school to fire professors who refuse.

Anderson School of Management professor Gordon Klein was doxxed by students after he refused to allow minority students to abstain from taking final exams. A student in Klein's Management 127 class, who wishes to remain anonymous for fear of retribution, requested accommodations for minority students during "these trying times." In the exchange, Klein questioned the appropriateness of using race to determine how students should be treated.

"Thanks for your suggestion in your email below that I give black students special treatment, given the tragedy in Minnesota," Klein wrote in his response email. "Do you know the names of the classmates that are black? How can I identify them since we've been having online classes only? Are there any students that may be of mixed parentage, such as half black-half Asian? What do you suggest I do with respect to them? A full concession or just half?"

Klein concluded his email with a quote from Dr. Martin Luther King Jr. that people should not be evaluated based on the color of their skin.

Preet Bains, a UCLA senior, started a Change.org petition urging the university to fire Klein for his response to the student's email.

"We ask for your support in having Professor Klein's professorship terminated for his extremely insensitive, dismissive, and woefully racist response to his students' request for empathy and compassion during a time of civil unrest," the petition reads.

More than 18,000 people had signed the petition as of Thursday afternoon. Bains did not respond to a request for comment. UCLA student Emilia Martinez, who initially shared the email on Twitter, said an "Afrolatinx" friend had sent the email but asked to remain anonymous. Martinez told the Washington Free Beacon that she went public with the emails to hold professors "accountable."

"I believed this information was important to bring to light because as a non-black poc, I believe it is my duty to amplify my black peer's voices," she said in an email. "I felt this was a very unreasonable response to a very valid request and decided that the Professor should be held properly accountable."

In a separate email to his entire class, Klein said that outside events, including personal hardship, do not necessarily relieve students of their responsibilities. He pointed to his daughter, who suffered a severe illness and lost close friends to suicide during her time at UCLA. Those personal hardships did not interfere with fulfilling her course work, according to the professor, who did not return a request for comment.

"Some students have asked that the final exam be delayed or changed or waived altogether. Life deals all of us challenges and I have no doubt that many of you are facing some now. In a perfectly fair world, I would be able to take these individual factors into account and perhaps modify the terms in our course syllabus, but my understanding of university rules is that, with rare exceptions, I should not," Klein said.

On March 16, UCLA sent a message to faculty encouraging professors to provide alternate forms of final assessments in light of the COVID-19 pandemic. The university does not require professors to cancel final exams or exempt minority students from completing their course work.

Some professors who accommodated student requests have been attacked online. Professor David Jewitt followed university suggestions and extended his Earth, Planetary, and Space Sciences final exam deadlines. The original accommodations extended the final from June 8 to June 15 and extended the class extra credit assignment from June 5 to June 8. The professor's changes were met with backlash, prompting Jewitt to claim that the deadline extension produced more controversy among students than Floyd's death.

"Changing the exam date produced ten times as many upset emails as did the original event in Minnesota. To accommodate people's summer plans, we will open the exam window on June 8 … and keep it open, so that the ultimate deadline is June 15," Jewitt wrote.

UCLA education professor Tyrone Howard was heralded earlier this week after he replaced his class's final paper with a one-page write up on how students feel about "what is going on in the nation right now."

"In lieu of your final paper, I would like everyone to submit a 1 page reflection (double or single spaced). I just want you to respond to these two simple questions: ‘What do I make about what is going on in the nation right now?' and ‘How am I doing right now?'" Howard wrote in an email to his Education 130 class.

"I would implore all of my UCLA faculty colleagues to strongly consider canceling or significantly altering final exams. Many students are struggling now, they need our support, and many are not in the best emotional space to focus on academics. Be compassionate & understanding," Howard tweeted.

UCLA did not respond to a request for comment. 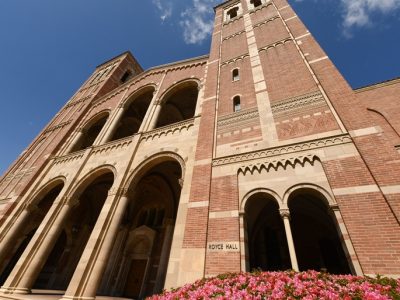