Data Reveal How Yale Discriminates Based on Race

Black applicants to Yale University are up to eight times more likely to be admitted than Asian applicants with the same level of academic skill, a disparity that the Department of Justice says violates federal law.

In a lawsuit filed Thursday afternoon in the U.S. District Court for the District of Connecticut, the DOJ alleged that Yale was in violation of Title VI of the Civil Rights Act, which prohibits racial discrimination by institutions that receive federal funds. In its 32-page complaint, the department documents Yale's use of race as a factor at every step of its admissions process and details statistical evidence that students of similar academic skill but different racial groups face wildly divergent admissions chances.

The suit follows DOJ's official request that Yale cease its use of race as an admissions factor, itself the result of a multi-year investigation into Yale's admissions practices. Although the two institutions negotiated extensively since that request was made in August, a DOJ official told the Washington Free Beacon, Yale has refused to alter its admissions process, necessitating legal action.

Yale president Peter Salovey contested the charges in a letter to the Yale community, writing that they were claimed on "inaccurate statistics and unfounded conclusions," and reiterated his view that "Yale does not discriminate against applicants of any race or ethnicity."

If accurate, DOJ's allegations provide new evidence of systematic racial discrimination against Asian and white applicants within the Ivy League. As with other pending lawsuits, the charges could give the most conservative Supreme Court in a generation the chance to upend a 40-year-old system of affirmative action. But the election of Democratic presidential nominee Joe Biden could also see the case gutted, putting the fate of thousands of higher education applicants on the line in the coming election.

Current Supreme Court precedent carves a narrow path for schools to engage in affirmative action, permitting the use of race as one of many factors in a holistic judgment of a candidate but prohibiting the systematic use of racial quotas. DOJ maintains that Yale is engaged in the latter, citing data the school released to the department and as part of annual reporting to the Department of Education. 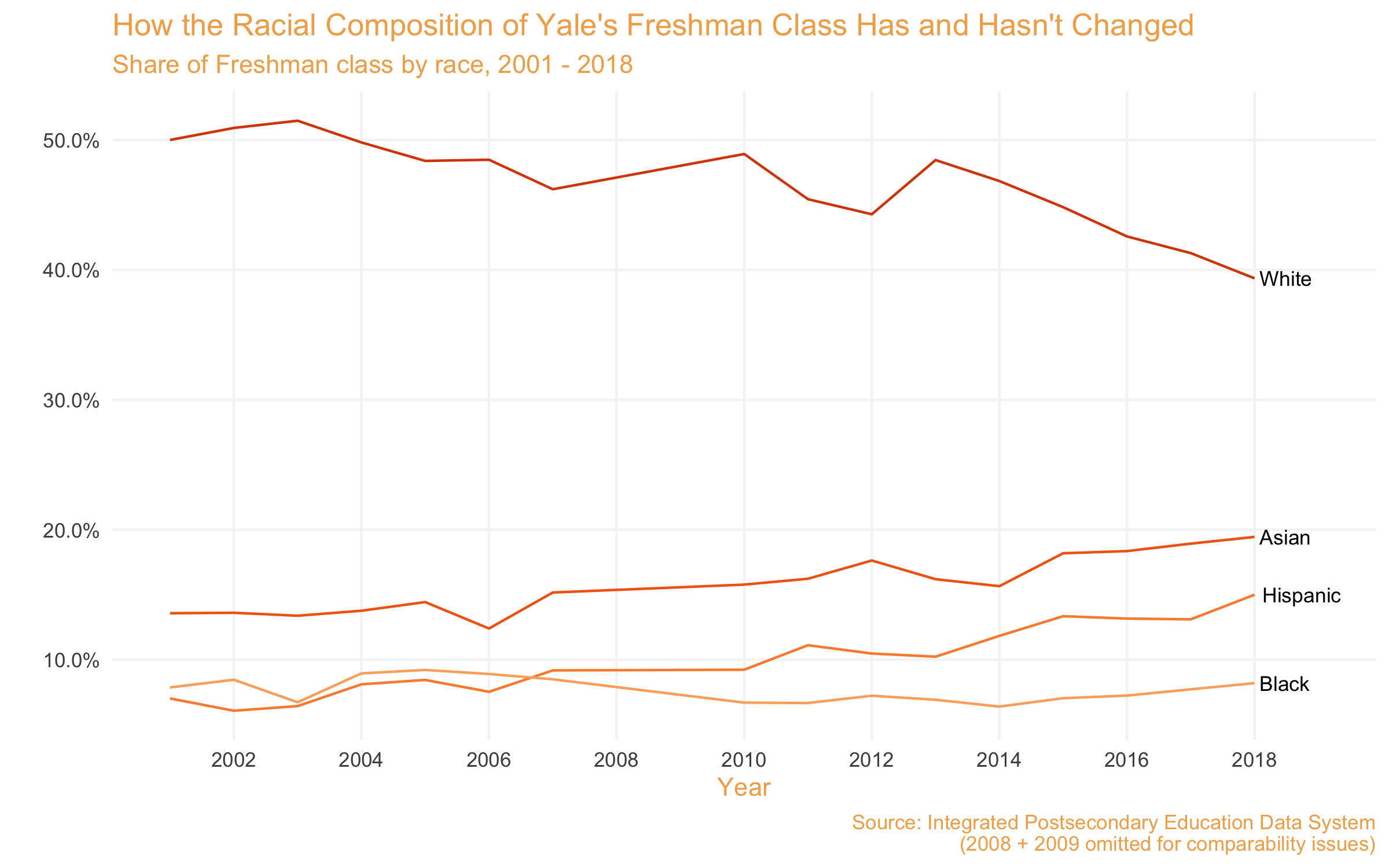 For at least the past two decades, DOJ argues, Yale has consistently ensured that its freshman class is between roughly 6 and 8 percent black, an illegal "racial balancing." Salovey claimed that over the same period the racial composition of admitted applicants "fluctuated significantly for all groups" but did not address the concerns about black students specifically.

Data on the 2017 and 2018 applicant pools, released by Yale to DOJ, show bigger signs of discrimination. In those classes, about 6.4 percent of white and Asian applicants were admitted, compared with 8.3 percent of Hispanic and 9.5 percent of black applicants. But those numbers mask gaping disparities that become apparent when comparing applicants' academic achievement, as measured by an "academic index" in use across the Ivy League. 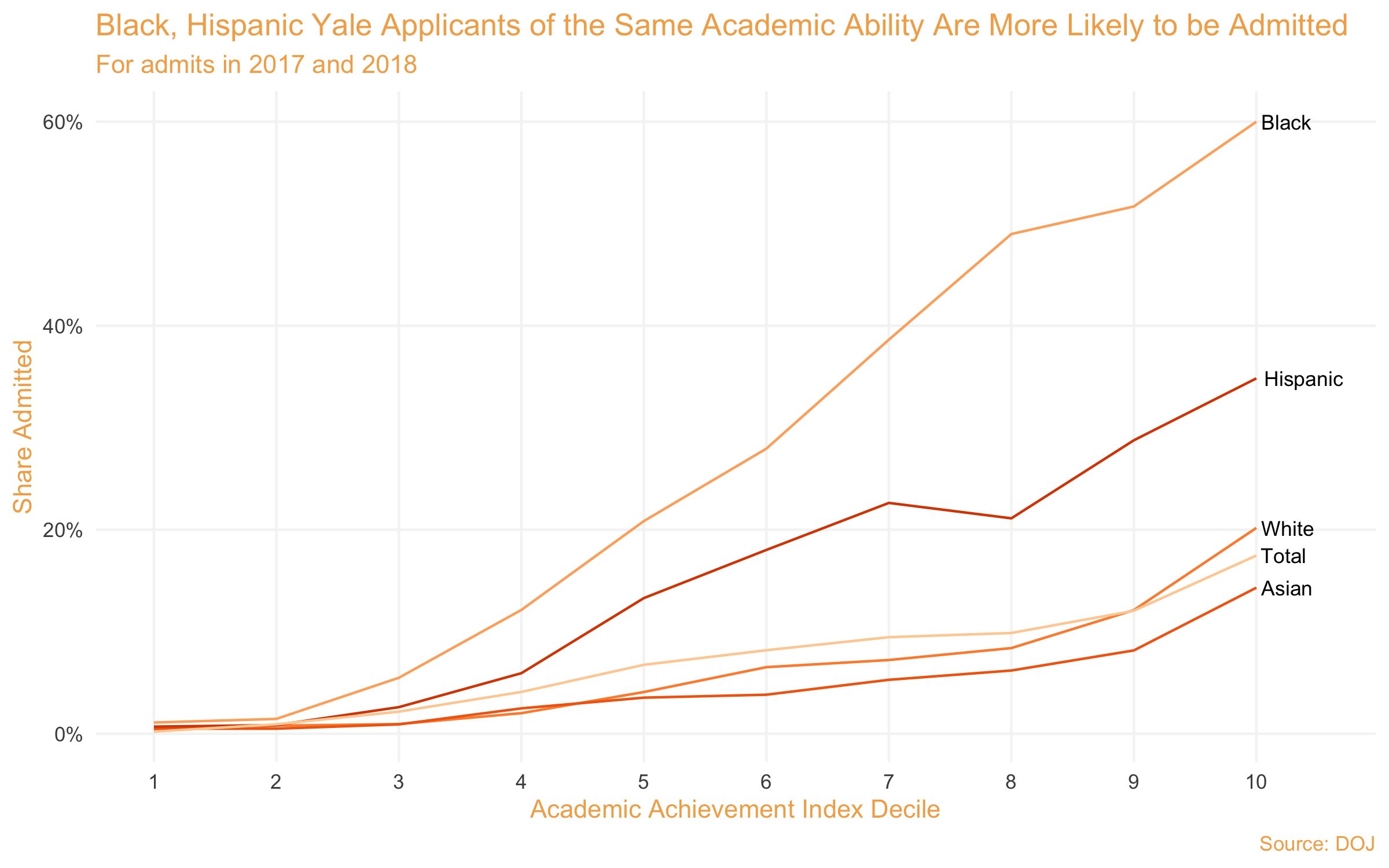 These disparities, DOJ argues, are driven by Yale's use of race at every step of the admissions process. According to the complaint, application readers are encouraged to use race as an explicit factor in grading the quality of an applicant; Yale also regularly "bops" white and Asian applicants, replacing them with black or Hispanic applicants to maintain the class's racial composition.

Yale may now move to dismiss or file an answer to the DOJ's complaint. A motion for dismissal will result in a brief before a judge by both sides; if Yale answers the complaint, then DOJ expects to begin the process of discovery, using the power of the courts to extract the admissions data that Yale has thus far not released.

At present, the DOJ official said, the department expects that this case could go all the way to the Supreme Court, giving a more sympathetic body the chance to revisit affirmative action rulings and the first opportunity to consider how the Civil Rights Act governs affirmative action at private institutions.

That makes Thursday's lawsuit one of several legal actions seeking to challenge universities' engagement with race. In September, the Department of Education announced it would investigate Princeton University for violation of Title VI after the school's president claimed that "racism" persists at Princeton. And a coterie of Asian students and parents under the banner of Students for Fair Admissions are continuing their legal battle against Harvard University, alleging the same unfair treatment that Asian applicants to Yale face.

"We are grateful the U.S. Justice Department has filed this important civil rights lawsuit against Yale University," SFFA president Edward Blum told the Free Beacon. "For too long, agencies of the federal government have turned a blind eye to the blatant discrimination directed against Asian Americans and whites in college admissions policies. It is our hope that this lawsuit eventually will contribute to the end of racial classifications and preferences at all U.S. colleges and universities."

One thing, however, could stand between DOJ and successful litigation against Yale: the November election. Democrats have been broadly critical of President Donald Trump's prosecutorial focus on higher education, dismissing it as a partisan attack. The Biden campaign did not respond to a request for comment as to whether or not Biden would continue the lawsuit against Yale if elected.