U.S.-funded contractors in Afghanistan have abandoned the construction of a $1 million teaching facility partway through its completion, exposing students and teachers to "potential electrocution," "fire hazards," and possible poisoning from a water well that was "placed too close to [the building’s] sewage system."

The Iraqi-based construction company responsible for building the taxpayer-funded facility has been paid in full despite the hazards and will not be held liable for the shoddy construction, according to the U.S. government’s top oversight official in Afghanistan.

The "U.S. Army Corps of Engineers [USACE] paid contractors and [then] released them from contractual obligations before construction was completed and without resolving serious health and safety hazards," the Special Inspector General for Afghanistan Reconstruction (SIGAR) concluded in a Wednesday report.

The Shebergan teacher training facility should have been completed in 2010. It was meant to be a cornerstone of the U.S. government’s reconstruction efforts in Afghanistan.

Instead, "its history is one of broken promises and undelivered results," SIGAR stated.

Afghans are currently occupying the partly constructed facility despite the fire, electrocution, and health hazards, according to SIGAR’s report.

"Despite construction being incomplete and despite health and safety hazards at the facility and despite being told by [the USAID aid group] not to occupy the site, Afghans are using it," the report states. 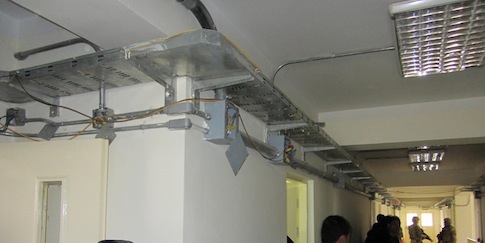 Exposed wires at the site

"The U.S. government is still responsible for operation and maintenance because USAID has not transferred the facility to the Afghan government," SIGAR found.

The United States is still paying $50,000 a month to fuel the building’s electric generator as a result.

The investigation uncovered "unsatisfactory performance, non-payment to subcontractors, reporting more workers than were actually on-site, [and] unauthorized purchase of window glass from Iran," according to SIGAR.

While the issue of fraud and waste in Afghanistan has largely faded from public view, some on Capitol Hill blame the White House for the ongoing reconstruction woes.

"This makes me angrier than the waste we saw in Iraq—at least we finished building the buildings we didn't need there!" one congressional aide told the Washington Free Beacon in an email.

"In the end, this is a byproduct of the president's refusal to make a decision on troop levels and the future of U.S. commitment in Afghanistan," the aide said. "Either we're getting out, or we're in for the duration. Let's not waste American taxpayer money because of political indecision."

This is not the first time that USACE has fully paid contractors before work was completed.

SIGAR found in 2012 that "USACE released its contractor from further contract obligations and paid the contractor in full despite performance issues and construction defects."

The contract was extended in June 2011, and its value jumped to $3.4 million, according to SIGAR.

Mercury completely abandoned its work in 2011, leaving a shoddily constructed building that has become a death trap for its inhabitants, according to SIGAR.

Rather than hold Mercury responsible for the facility, USACE "closed out the contract and released Mercury from further contractual liability," according to SIGAR’s report.

When approached by SIGAR for an explanation, USACE "officials were unable to explain this decision because they were not the responsible officials in Afghanistan at that time."

A second contractor, Zafarkhaliq Construction Company, "also failed to complete construction" on the facility but also was let of the hook, the investigation found.

"SIGAR was unable to determine why, but as it did with the first contractor, [USACE] released Zafarkhaliq from further contractual liability," according the report.

Internal government "contract close out files showed that Mercury and Zafarkhaliq completed all work and all outstanding issues had been resolved despite unfinished construction and electrical problems that remain to this day," SIGAR found.

The inspector’s report concluded that there is a "disturbing trend" in which "USACE fails to hold contractors accountable for completing the work they were paid to perform," SIGAR concluded.

When confronted with a draft of SIGAR’s report, USACE stated, "it no longer had the authority to conduct work on this project or control the facility’s usage."

USAID told SIGAR that it is reviewing the findings and plans to enlist another contractor to finish construction of the facility in the near future.