Gonohorrea, syphilis on the rise in recent years following decades of decline

A recently released report from the Center for Disease Control (CDC) found an increase in sexually transmitted diseases in America in 2016, continuing a sharp reversal from decades of lower rates.

Sexually Transmitted Disease Surveillance 2016, released by the CDC in September, covers trends in so-called notifiable diseases, most notably chlamydia, gonorrhea, and syphilis. All three diseases saw increases between 2015 and 2016 in their rate of cases per 100,000 population: chlamydia increased by 4.7 percent, syphilis by 17.6 percent, and gonorrhea by 18.5 percent. These increases show up across all regions, both sexes, and all racial and ethnic groups.

These jumps are part of a years-long trend in U.S. STD rates. Rates of chlamydia infection have grown essentially continuously since the CDC began tracking them in 1984. Syphilis hit a historic low in 2001— 2.1 cases per 100,000—before rising 314 percent to today’s rate. Gonorrhea also hit a historic low in 2009; the 2016 rate is 48 percent higher.

All three infection rates follow reliable demographic norms. All three STDs are most prevalent among African Americans and Native Americans. Chlamydia predominates among young women, although in most cases women’s infections are asymptomatic. Syphilis predominates among men who have sex with men (abbreviated "MSM," a term used by CDC which avoids complicating factors of self-identified sexual preference). Men make up 90 percent of syphilis cases, 80.6 percent of which are MSM. 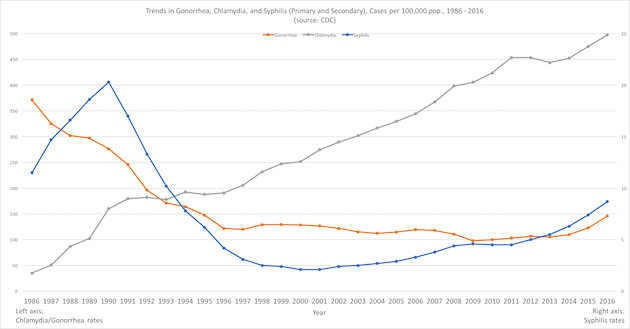 To some degree, the increases in STD rates are attributable to more effective measurement technology, and more thorough reporting on the part of states and local organizations. However, this is unlikely to cover all of the rise, and especially not the inversion in trend.

"Not that long ago, gonorrhea rates were at historic lows, syphilis was close to elimination, and we were able to point to advances in STD prevention, such as better chlamydia diagnostic tests and more screening, contributing to increases in detection and treatment of chlamydial infections. That progress has since unraveled," Dr. Gail Bolan, CDC Director of the Division of STD Prevention, wrote in the report's introduction.

Compounding the upwards trend are several disturbing public health signs. Drug resistance is an increasing threat in both chlamydia and gonorrhea. In both instances, dual therapy with ceftriaxone and azithromycin has become the only CDC-recommended treatment regime; the CDC warns that strains resistant to ceftriaxone intervention may be a growing issue.

Additionally concerning is the increase in the rate of congenital syphilis—syphilis passed from a mother to her unborn child. After dropping from a 1990s epidemic peak to a low of 8.2 cases per 100,000 in 2005, congenital syphilis has risen 91 percent in the subsequent 11 years.

The CDC report suggests these increases may be tied to failures of infrastructure and funding.

"The resurgence of syphilis, and particularly congenital syphilis, is not an arbitrary event, but rather a symptom of a deteriorating public health infrastructure and lack of access to health care," Bolan wrote. "It is exposing hidden, fragile populations in need that are not getting the health care and preventive services they deserve."

Fred Wyand, Director of the American Sexual Health Association, suggested that there is some merit to the CDC’s analysis.

"One can’t discount the squeeze put on prevention services as tighter budgets mean public health programs dedicated to prevention and treatment must continually do more with less. This certainly impacts STD rates," he said.

Spending may not be the only explanation. Some analyses focus on the relatively low use of condoms by Americans—data from the National Survey of Sexual Health and Behavior released in 2010 indicate rates of usage between ~10 percent and ~25 percent, depending on the sex of the respondent and the type of sexual act.

One CDC study of women’s contraceptive habits in 2006 to 2010 found a four percent decline in the proportion of women using condoms as compared against 1995. On the other hand, the CDC also finds that the number of women who have ever used a condom grew by more than 40 percent between 1982 and the 2006-2010 reporting period. Wyland noted that a recently released report "found the number of teens who have had sex remained stable in recent years while the rate of contraception use has increased."

One seemingly contradictory fact that must be included in consideration of the CDC’s findings: Americans are having less sex.

"American adults had sex about nine fewer times per year in the early 2010s compared to the late 1990s," authors Twenge, Sherman, and Wells note.

Young Americans—those in the millennial cohort—are also having less sex than their older counterparts were at their age, which is significant considering that half of all new STD infections each year strike people between 15 and 24 years old.

Prof. Bradford Wilcox, Director of the National Marriage Project at the University of Virginia, described the concurrent rise in STDs and drop in sex among the young as "a bit of a mystery." Wilcox suggested to the Free Beacon that, "it’s possible the rise of apps like Tinder may cause that trend."

For Peter Sprigg, a senior fellow at the Family Research Council, the issue is clearly one of culture.

"Where we violate a traditional sexual ethic of abstinence until marriage and fidelity within marriage, there are tangible negative consequences, of which the epidemic of STDs is the most obvious example," Sprigg said.

Sprigg argued that increase in drug resistance especially indicates that addressing STD growth would require a cultural solution as much as anything. "The problem is not going to have a purely medical solution," he said.