FEATURE: Inside the $914,000 government project to raise the profile of bodice-rippers

"I kind of pictured it more sophisticated," a woman said, sitting at what looked like a crafts table in a Kindergarten class.

Kids scissors and glue sticks were spread about. It was only the paper cut outs of swords, cowboys, roses, and magical castles that gave away that this was an exhibit for women to design their own cover for a romance novel.

Little did I know that while I was working on my design, which depicted a grandmother-like figure walking on the beach with a nameless beast, that I would soon be interviewed for a local cable access television show. 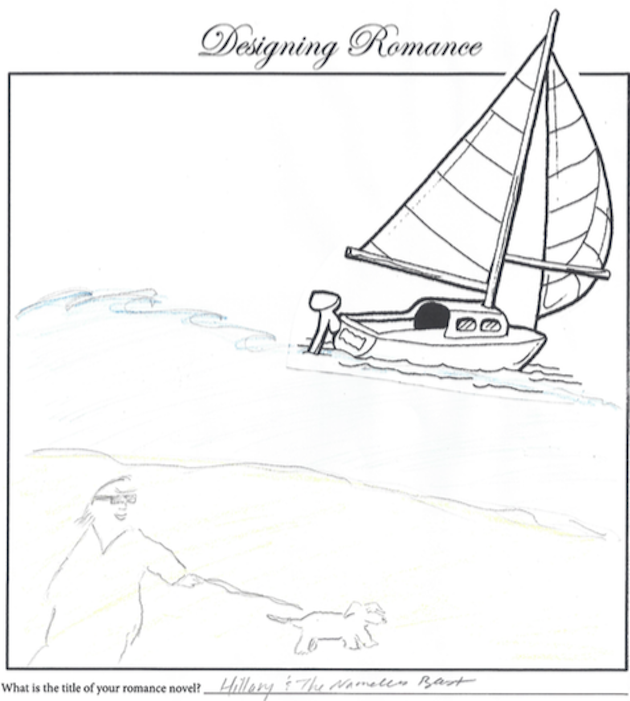 Hillary and the Nameless Beast

My expertise on romance novels was thin. Luckily, the federal government shelled out nearly $1 million to enlighten me.

"What Is Love? Romance Fiction in the Digital Age," the traveling exhibit to promote romance novels, paid for by a $914,000 grant from the National Endowment of the Humanities (NEH) and was exposed in former Sen. Tom Coburn’s (R., Okla.) 2013 Wastebook, made its way to the Library of Congress on Wednesday, timed for Valentine’s Day.

Dozens of women had gathered to attend the conference, which featured panels on what belongs in the romance canon, and what science and history reveal about love. A breakout room had writers advertising their books, a workshop to write the opening paragraph of your own romance novel, and the aforementioned exhibit to create your own cover.

Selections displayed from Riptide Publishing included Frat Boy and Toppy, a romance about two gay grad students, and Glitterland, which I was told was the best romance novel of 2014. The book follows Ash Winters, a "clinically depressed writer" who falls in love with a male model at a "stag party."

Fans of the genre, which notoriously employs raunchy sex scenes and only depicts love stories with a happy ending, also got to view an early release of the documentary Love Between the Covers, produced and directed by Laurie Kahn.

A couple dozen women were watching the film when I walked in, and gave it a round of applause upon its conclusion. The documentary is a love affair to romance novels, arguing that Nora Roberts is just like Ernest Hemingway, because all of his stories end the same way, too.

"This is a story about pride and also a story about prejudice," the film begins. Love Between the Covers follows five romance novelists as they pump out book after book. Extensive interviews are conducted with Celeste Bradley and Susan Donovan, authors of Unbound, Radclyffe, also known as Dr. Len Barot, who began writing three lesbian romance novels a year while still working as a plastic surgeon, and others.

The extreme popularity of romance novels did not stop the government from needing to finance the production of the film. The NEH grant included $664,000 for the documentary. Once funds ran out Kahn turned to Kickstarter, where she raised an additional $58,669 to get the film made.

Kahn has received $2,299,208  from the NEH to make films that have appeared on PBS since 1992, including the funding for the romance novel documentary.

She also received $1,185,208 for A Midwife’s Tale, an Emmy-award winning film about midwife living in Maine in the aftermath of the American Revolution, and $450,000 for Tupperware!, which traces the history of the plastics empire.

Love Between the Covers may also find its way to public television, as Kahn is in talks with various broadcasters at PBS.

The film’s overall message is that romantic fiction is empowering for women and that it deserves some respect—though writers and followers alike couldn’t care less about the critics.

"Romance is sneered at because it's written by women, for women, and read by women," said one publisher interviewed for the film.

Beverly Jenkins, whose works include Night Hawk and Cuffed by Candlelight, said romance novels are really just about the American Dream. The "HEA," or happily ever after, she says is what it is all about.

The film then cuts to images of an idea Jenkins had for another novel: a muscle-bound, shirtless man walks into a house on a cold winter night, wearing only a scarf and holding a tennis racket.