Harris: No Reason to Have Assault Weapons in a Civil Society

During a CNN-sponsored town hall in Iowa Monday night, Sen. Kamala Harris (D., Calif.) said there is "no reason" to have assault weapons in a civil society.

"We have got to have smart gun safety laws in this country, and we've got to stop buying this false choice. You can be in favor of the Second Amendment and also understand that there is no reason in a civil society that we have assault weapons around communities that can kill babies and police officers," Harris said.

Harris, one of the many Democrats running in the 2020 presidential primary, held a town hall in Iowa where a pastor asked what she would do to tackle gun violence.

"As you know, the rates of gun violence in America are astronomically higher than in other western democracies. What do you think can be done, and what would you be prepared to do to address the problem of gun violence?" the pastor asked.

"Something like universal background checks. It makes perfect sense that you might want to someone can buy a weapon that can kill another human being, you might want to know have they been convicted of a felony where they committed violence," Harris responded.

Harris invoked the 2011 shooting of former Rep. Gabby Giffords, saying she believed members of Congress should have responded by enacting gun control laws out of self-interest and in support of a colleague. She did not mention the shooting of Rep. Steve Scalise (R., La.) in 2017.

She also invoked the Sandy Hook school shooting, and she suggested lawmakers should have been forced in a locked room to look at the autopsy photographs and then allowed vote their conscience. In that shooting, 20 elementary school children and six adult staffers were killed.

"This has become a political issue, and there is no reason why we cannot have reasonable gun safety laws in this country," she said. "Here's the reality of it also: we're not waiting for a good idea. We have the good ideas: an assault weapons ban, background checks." 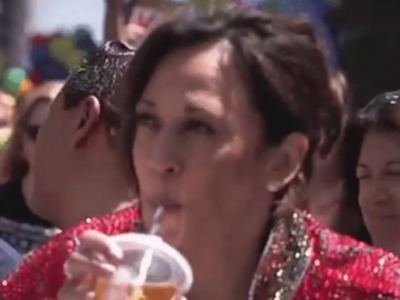