CNN host Chris Cuomo recently spread a misleading story on Twitter about how easy it is to purchase an AR-15, only to double down when called out on the error.

Cuomo retweeted a viral tweet with a picture of a young man holding a gun and text reading, "I was able to buy an AR-15 in five minutes. I'm 20 and my ID is expired." 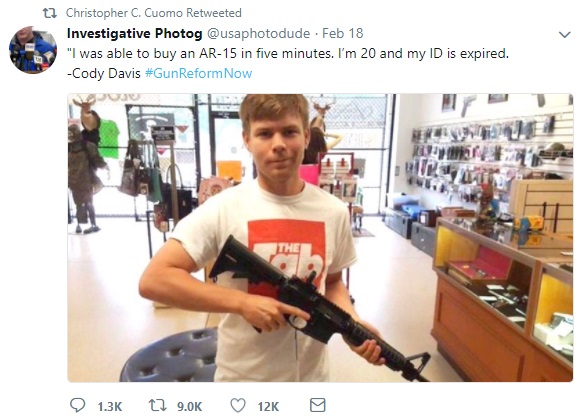 That quote and picture were taken from a 2016 story on the Tab headlined, "I was able to buy an AR-15 in five minutes." But once one reads the actual story, they learn that the author did not buy the AR-15; he stopped the purchase at the point at which he would have had to actually fill out paperwork.

"After he walked me through the paperwork, all five pages of it, I told him I changed my mind and wanted to think more before I bought an AR-15," the story reads. "He told me it wasn't a problem and listed the store hours if I wanted to come back. I then said thank you and walked back to my car."

While much of the story harps on the fact that the gun shop failed to note that the young man was using an expired ID, the paperwork in question would have required the vendor to enter the expiration date of his driver's license. The author also says there was "No delay. No extensive background check," ignoring the fact that he called off the purchase before he would have been subjected to a federally required background check.

Cuomo was called out on Twitter days later for sharing a story that was, at best, misleading.

Hey, @ChrisCuomo from CNN. Saw the article you retweeted: "I WAS ABLE TO BUY AN AR-15 IN 5 MINUTES"

Did you see the part where he admits to neither filling out the necessary paperwork (which would initiate the background check) NOR purchasing the AR-15? Weird. pic.twitter.com/wLfaiKCqaM

But Cuomo doubled down, saying that the kid's age and expired ID were the real issues (again, ignoring the fact that the gun shop would have checked the ID more thoroughly if the purchase had continued).

Isn’t the point that the kid’s age and lack of ID wasn’t a deterrent? and this isn’t all gun shops. Place I bought my shotgun basically goes farther than law requires and makes judgments about whom to sell to. Point is the system should be better https://t.co/sL1j0hYtTg

The point is that the kid lied about buying a gun that he didn’t, and that you are now lying too.

Cuomo responded by grouping Cooke with a group of alt-right trolls who have attacked the legitimacy of the Parkland shooting survivors and called them "crisis actors."

Lying? Look if you want to fight against background checks, make the case. Whether it is calling the kids actors or LYING about how no laws could stop the shootings…that is the bs to call out. 97% of people want better checks. Why fight that? https://t.co/YCLVyi5VT3

The CNN host continued to quote tweet critics, while not addressing the charge that he spread a false story.

Take your own advice. If you don’t think it is wrong for a kid like the Florida murderer to be able to get a gun legally – you are full of it. The good news – you are a shrinking minority. 97% say they want better background checks. Wake up! https://t.co/wnbsZA1t2k

Many ignore you – not me. Shame on you for calling the truth lies. school shootings can be stopped. Background checks must be better. Kids like this murderer in Florida should not be able to legally purchase. if you don’t get that, you may not have mental capacity to own a gun. https://t.co/eGwbZFHoy4