Rep. Jamaal Bowman (D., N.Y.) has developed close ties to a Turkish-American advocacy group accused of working on behalf of Turkish president Recep Tayyip Erdogan, whose members were on hand as the Turkish leader's bodyguards beat peaceful protesters in Washington, D.C., in 2017.

Bowman, a self-described socialist, appeared last month at an event in his congressional district with the Turkish American National Steering Committee. Bowman also spoke at an online education forum hosted by the committee on May 20, where he said he looked forward to working with the organization in the future. At least eight committee officers contributed to Bowman's campaign last year, according to Federal Election Commission records.

Relations between the United States and Turkey have frayed in recent years as Erdogan has led a crackdown on his political opponents at home and abroad. Erdogan pressured the United States to block a resolution acknowledging the Armenian genocide. The Biden administration accused Erdogan of making anti-Semitic statements last month after he accused Israel of murdering Palestinians and wanting to "suck their blood."

Founded in 2016, the Turkish American National Steering Committee is known for its vocal support of Erdogan and Turkey's foreign policy agenda. The group has led a massive public relations effort to oppose the Armenian genocide resolution and suggested in a Facebook post last month that Israel waged a "massacre" against Palestinians.

The group has hosted Erdogan at events during his past trips to the United States. In May 2017, committee officials were on hand as Erdogan's bodyguards attacked Armenian, Kurdish, and Yazidi demonstrators outside the Turkish ambassador's residence in Washington, D.C.

"TASC operates as an Erdogan front, one of many astroturf groups advancing this dictator's anti-American agenda in Washington, D.C.," said Aram Suren Hamparian, the executive director of the Armenian National Committee of America.

"By appearing at TASC events, Bowman is siding with the most dictatorial elements in Turkey, symbolically spitting on Turkish journalists and progressives imprisoned by the Erdogan regime, and giving solace to a group on the wrong side of the attack on Americans in the heart of Washington, D.C.," said Michael Rubin, a resident scholar at the American Enterprise Institute who has been targeted by the Erdogan regime.

Rubin said that the committee works to promote Erdogan's "megalomania" and that of his most extreme supporters.

Bowman's office did not respond to questions about whether he was aware of the committee's close links to Erdogan and its support for his foreign policy agenda.

At an event in New Rochelle on May 6, Bowman thanked the Turkish community and said he wanted to work "to fight Islamophobia" and racism. Bowman posed for photos with Halil Mutlu, a committee co-chairman and cousin of Erdogan. 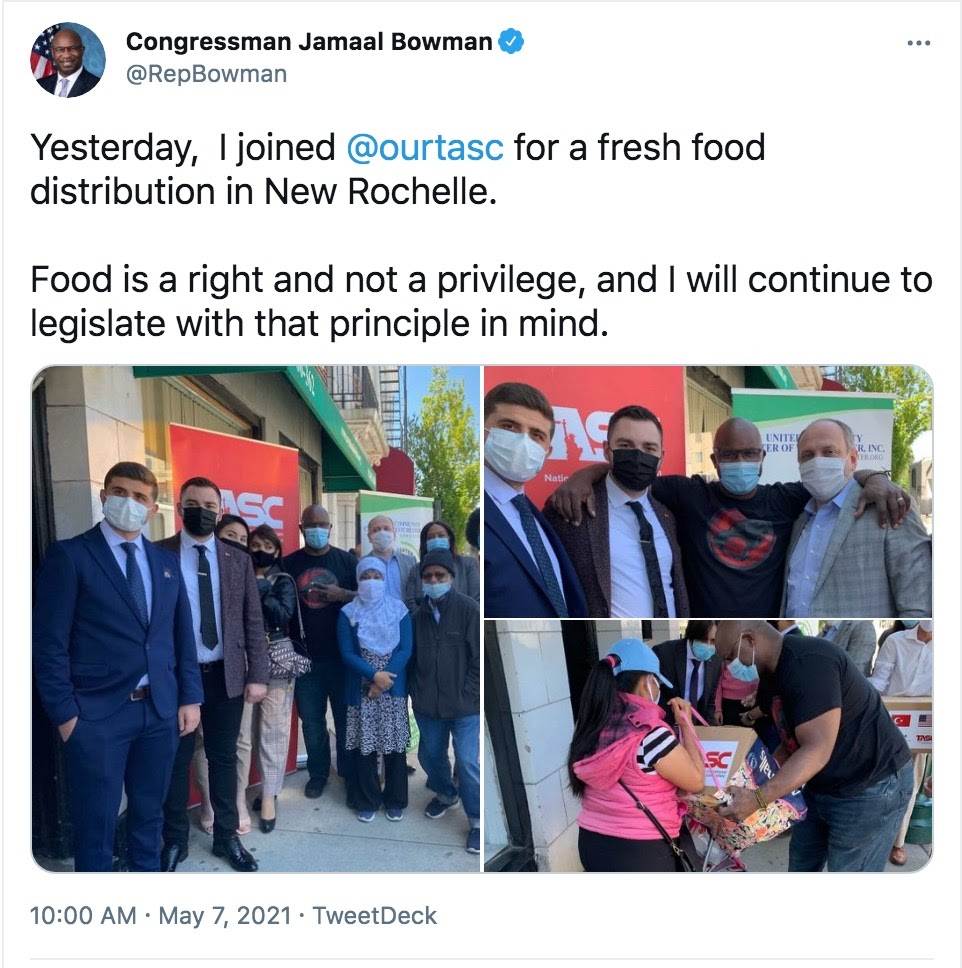 Committee officials contributed a total of $6,750 to Bowman's campaign during the primary. Mutlu, the Erdogan relative, gave $1,000 to Bowman.

The committee has attacked other prominent Erdogan critics. In December, the group's Twitter account was temporarily suspended over attacks against Enes Kanter, a Turkish-American NBA player who has called Erdogan a dictator. Bowman criticized Kanter during his primary campaign because of the athlete's support for Engel. Kanter had endorsed Engel because of his opposition to Erdogan.

The Turkish government imprisoned Kanter's father over his support for Fethullah Gulen, a Muslim cleric who opposes Erdogan.

The Turkish American National Steering Committee did not respond to a request for comment.