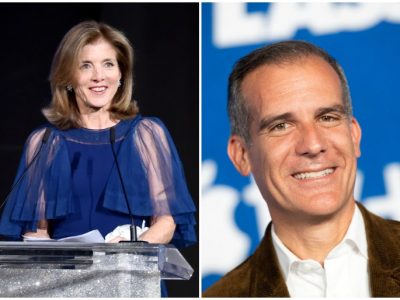 Senate Democrats are privately conceding that Los Angeles mayor Eric Garcetti (D.) has no chance of being confirmed as ambassador to India, following sexual harassment allegations against his former aide.

Rick Jacobs, who served as Garcetti's deputy chief of staff from 2013 to 2016, has been accused by a city police officer and former mayoral spokeswoman of sexual harassment during his tenure. The accusation has ensnared Garcetti in an alleged coverup and resulted in a lengthy private investigation into the matter. Senators who spoke with Punchbowl News said Garcetti's confirmation is now "withering on the vine."

Officer Matthew Garza is suing the city, alleging that Jacobs would frequently grab his biceps and massage his shoulders, as well as engage in unwanted sexually explicit conversation. Naomi Seligman, who served as communications director for Garcetti from 2015 to 2017, said Jacobs forcibly kissed her on one occasion. She has "briefed more than a dozen Senate offices from both parties" on the matter, according to Axios.

The sexual harassment investigation yielded a 310-page report, which the Senate Foreign Relations Committee received in November. Republican senators, including Joni Ernst (Iowa), who is a survivor of sexual assault, have placed holds on Garcetti's confirmation until they can read the report in full.

President Joe Biden nominated Garcetti for the ambassadorship in July 2021 after the mayor had served as co-chair on the president's campaign.

Biden maintains he has "confidence" in the mayor despite the accusations.

"The president has confidence in Mayor Garcetti and believes he'll be an excellent representative in India," the White House said following the allegations. "His nomination advanced unanimously with bipartisan support in committee. The White House and the State Department are making calls to senators and working to earn bipartisan support for his nomination. He should receive a vote in the Senate expeditiously."

A Democratic senator who spoke with Punchbowl News suggested the nomination lacks necessary momentum. Senate majority leader Chuck Schumer (D., N.Y.) would also have to sacrifice floor time in addition to courting all 50 votes from senators in his caucus to pursue the nomination.

Garcetti was among a group of top California Democrats who violated their own mask mandates during the 2022 NFC championship in January. Pictures show Garcetti, San Francisco mayor London Breed (D.), and California governor Gavin Newsom (D.) with their masks off during the game. Garcetti later told reporters he wore his mask "the entire game," removing it only for the sake of the photos.

"When people ask for a photograph, I hold my breath," Garcetti said.