Sen. Mark Kelly (D., Ariz.) on Monday called for the resignation of one of his top allies in the Arizona state legislature who was charged with seven child sex crimes.

"The charges against Senator Navarrete are serious and disturbing," Kelly tweeted. "The justice system must uncover all of the facts and enforce the law. It has been days now since these charges came to light and Senator Navarrete should resign immediately."

The charges against Senator Navarrete are serious and disturbing. The justice system must uncover all of the facts and enforce the law. It has been days now since these charges came to light and Senator Navarrete should resign immediately.

The arrest could see Navarrete jailed for at least 49 years under Arizona's mandatory minimum sentencing law. It could also spell political trouble for Kelly, who is up for reelection in 2022. GOP challenger Blake Masters highlighted the incident in a Friday tweet, accusing Democrats of "turning a blind eye to the worst actors in their midst."

Kelly campaigned with Navarrete after touting his endorsement. In a now-deleted Facebook post, Navarrete congratulated Kelly on his November victory by sharing a post of the pair together during a 2020 Kelly campaign event. 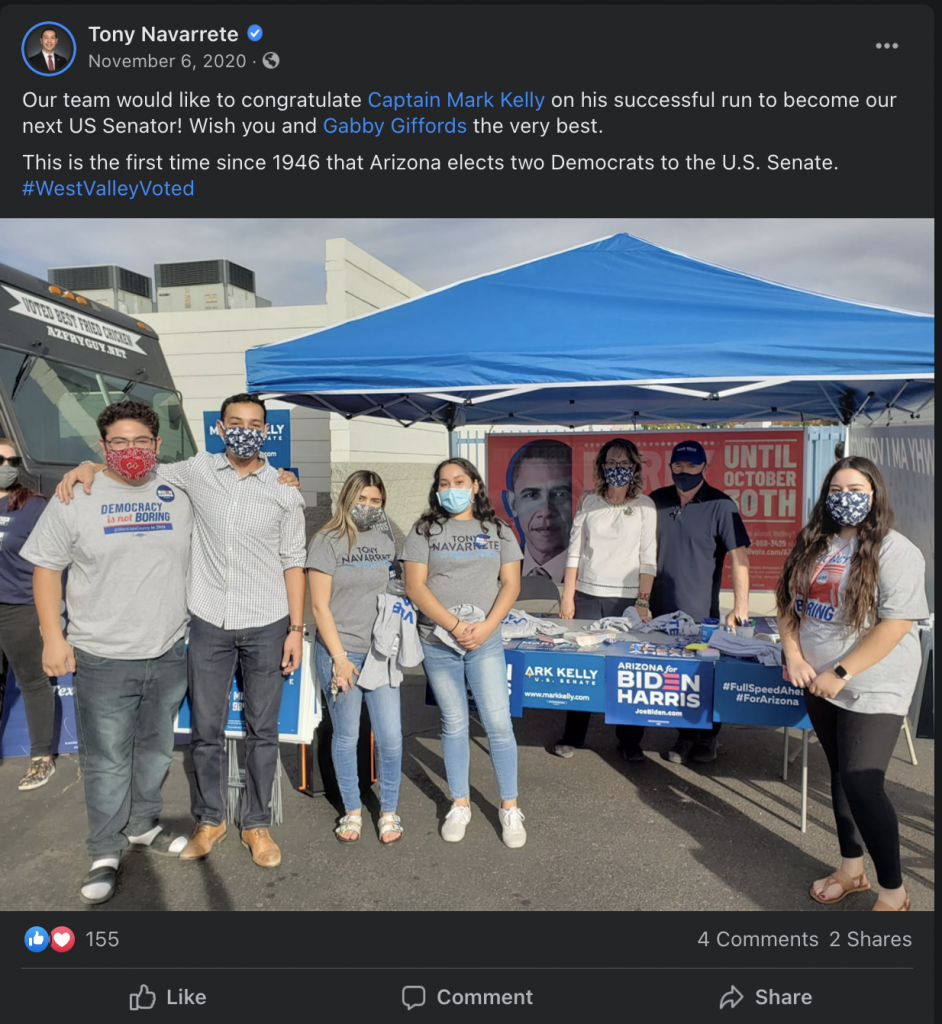 "Mark Kelly is the type of leader Arizona families want," Navarrete said in a Kelly campaign press release. "He is a national hero, veteran, family man, and active community leader. I am proud to support our next U.S. Senator Mark Kelly." In the release, Kelly said he was "honored to have the support of such a great group of leaders who have contributed so much to our state."

Every Democratic member of the Arizona state legislature called on Navarrete to resign following his Thursday arrest.

According to local court documents, police recorded a phone conversation between Navarette and a young victim, during which the state lawmaker admitted he performed oral sex on the child multiple times.

"The circumstances and serious nature of the felony charges faced by Senator Navarrete provide an untenable distraction from his role as an elected official and public servant for District 30," state house and senate Democrats said in a joint statement. "Abuse of this kind is intolerable and our hearts go out to the victims."

Navarrete, who was expected to announce a statewide run for treasurer in the near future, declined to speak to investigators after his arrest. County officials set his bond at $50,000 on the condition that he has no contact with minors while released.

"He should have no contact with minors, absolutely, whether in his family, strangers," Maricopa County deputy attorney Jeanine Sorrentino said. "I also think he should be prohibited from going any place where minors would typically hang out, schools, parks, malls, the toy aisle in Target."