The World’s Largest Monument to Nitpicking

Feature: What I saw at the Ark Encounter museum

CINCINNATI, Ohio—Of course it was pouring. Driving down I-75 in minimum-visibility road conditions past Shell stations and strip malls toward the Ark Encounter, the life-sized replica of the vessel used by Noah to save mankind and the animal kingdom from God’s wrath during the Deluge that opened last month in Williamstown, Kentucky, my only question was "Can she float?"

When I posed this question to various members of museum staff, the consensus seemed to be "Probably not," if only because the massive cement beams underneath the 300-cubit—that’s 510 non-biblical feet, longer than two Taj Mahals turned on their sides—ship were pretty much permanent anchors.

"How many floors you got here?" a woman in an LSU Tigers T-shirt asked a museum employee as I approached the entrance.

The staffer smiled. "There are three decks." The staff seem to be under orders to employ nautical terminology at all times.

As we made our way through the line, we watched sped-up footage of the Ark’s construction and listened to music that sounded like Vangelis accompanied by the rhythm section from "Diamonds on the Souls of Her Shoes." If the aesthetic they were going for was "apocalyptic-primitive," they nailed it.

As soon as I got inside, I heard the sound of thunder. Had the rain really picked up? Then I noticed that growls and hisses and squeaks were issuing from all around me and that I was surrounded by thousands of bamboo crates and earthenware vessels. From far off I thought I heard a man say "Ooooh" in a Halloween spooky voice. 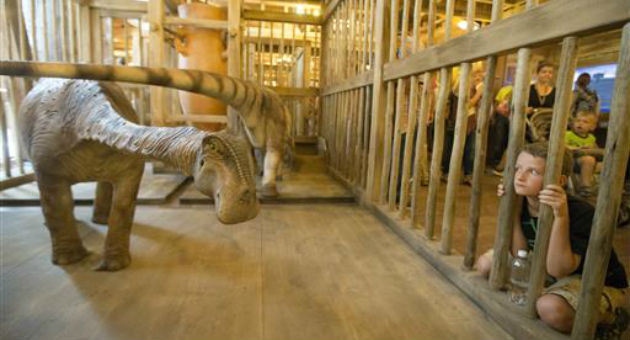 Moving across the floors—excuse me, decks—I saw scores of larger wooden cages full of what looked like taxidermied animals: black bears and porpoises and otters and deer and boar and iguanas and—pterodactyls? Yes: one of the things that will surprise even those visitors to the Ark who are inclined toward a literal reading of the Book of Genesis is the insistence of the museum’s creators that dinosaurs and other prehistoric fauna not only lived alongside man from Creation onward but were also among those chosen by God to survive the Flood. One of the first things I noticed on deck number two was an enormous painting, in a pleasant Tolkien-calendar style, of a nude Adam and Eve (rear view, hips submerged) standing in front of a waterfall next to a frolicking pack (or herd? Flock? Murder?) of apatosauruses; another panel in the same series, illustrating man’s antediluvian greed, showed a vicious-looking warrior brandishing a blood-stained horn as crimson poured down his chest and the corpses of dozens of triceratops loomed beside and behind him.

The artists really were very good.

Ages less dreary than our own did not struggle much with questions about Ark-related logistics. As late as the mid-17th century, the English polymath Sir Thomas Browne could remark, "How all the kinds of Creatures, not only in their own bulks, but with a competency of food and sustenance, might be preserved in one Ark, and within the extent of three hundred Cubits, to a reason that rightly examines it will appear very feasible." The authors of an article in the 1771 Encylopaedia Britannica were similarly content to observe that "taking the common cubit as a foot and a half, the ark was abundantly sufficient for all the animals supposed to be lodged in it."

This is no longer the case. According to recent scientific estimates, there are 8.7 million species on earth, most of them animals. But the museum’s creators insist that the modern scientific concept of "species" is not synonymous with the biblical injunction to take two of each "kind." At most, they say, there must have been 7,000 animals on board the Ark, with each member of Noah’s family responsible for about 850. Even with 130,000 square feet to spare, that seems like a lot—unless, as they also insist, virtually all the animals on the Ark were juvenile specimens, a suggestion that seems ingenious only because we are accustomed to children’s books and Playmobil Noahs on tiny boats flanked by a handful of giraffes and lions.

One fascinating exhibit on the second deck addresses the question of what Noah and his family did with the vast amounts of animal excrement that accumulated during their month-plus trek. A video display and a series of panels I saw outlined a theory that involved dung being shoveled into hundreds of buckets attached to a semi-automated pulley system powered by zebra- and stegosaurus-drawn mills and dumped over the edge of the ship. Feeding, we were told, was also streamlined via an endless series of slotted floors and angled trays and an elaborate system that collected rain water from the top of the ship and filtered it into one of many thousands of cisterns by way of bamboo pipes. 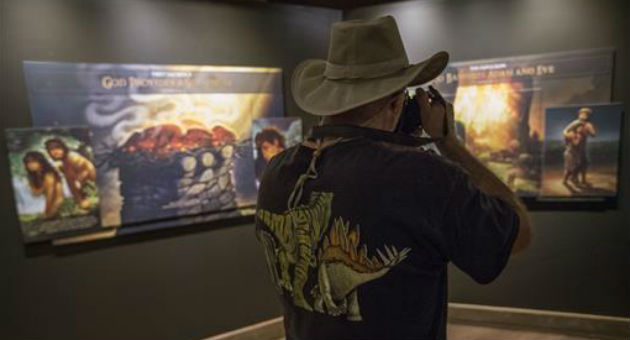 There was a great deal more in this vein. In fact, the Ark Encounter seemed designed to field virtually every question a would-be clever skeptic might see fit to pose in a debate—and just as many that would not occur to the most virulent liker of Christopher Hitchens YouTube videos. "Were There Unicorns on the Ark?" one of the placards asked us, echoing a common objection posed by atheists familiar with older English translations of Scripture. No, it said, just rhinos and various horned species of dinos. What did duck-billed dinosaurs eat? Parsnips. How did they get enough fresh air into the ship? They probably had a moon pool or a wave-powered purifier. What was Noah’s least favorite animal? The woodpecker, according to a talking animatronic version of the patriarch, who added, with a mechanical twinkle in his eye, that "all God’s creatures are special." Who were Noah’s daughters-in-law? What were their hobbies? One of them might have been named Ariel; perhaps her favorite thing to do was read.

Some of the things I saw made me consider the extent to which the two sides in the increasingly tedious creation-versus-evolution debate talk past each other. Apparently when Ken Ham, the religious entrepreneur behind the Ark Encounter, and his colleagues denounce evolution, they are not claiming that there is no such thing as natural selection or random genetic mutations that result in changes over time, which is to say, evolution. Could it be that the e-word itself has become a kind of bugbear, a code not for a scientific theory but for sneering materialism? My conversation with Dan, a soft-spoken 60-something museum employee who gave me a bottle of water while I waited in the rain for a cab, reinforced this impression. "I’m writing a book on this," he said. "Of course there’s natural selection and genetic changes. No one denies that. But evolution isn’t anything."

The question that Christian visitors to the museum will ask themselves is what the point of all this is. Looking at elaborate reconstructions of pre-Deluge ungodly living—robed priests on the steps of a ziggurat handing over babies to be sacrificed to a gilt snake idol, slave maidens striking titillating poses and feeding grapes to Sumerian emperors—and pondering the question of Noah’s occupation—they think he might have been a blacksmith—is fun, but is it spiritually edifying?

There is something striking, even sublime about the sight of the Ark itself, which is being billed as the "largest timber-frame structure in the world." But was it worth spending $100 million, most of it in junk-grade municipal bonds via an arrangement that I cannot imagine many of our current federal judges think constitutional? What about the zip-line course across the surrounding valley that I decided to forego and the Noah’s Chili With Cheese and $2.50 soft drinks (no refills) at the adjacent restaurant and the planned Tower of Babel—not to be built to scale, one presumes—and pre-Flood city exhibits? Will this strengthen anyone’s faith or bring a single soul to Christ?

Or is it merely a monument to the nitpickers amongst us?