A leader of the Time's Up project to stamp out sexual harassment in the medical profession ignored a well-documented accusation of assault made against a popular doctor at her hospital, according to a new lawsuit.

The lawsuit says Dr. Esther Choo, an Oregon doctor who is a founding member of the anti-sexual harassment advocacy group Time's Up Healthcare, took no action when notified of a string of assault allegations against Dr. Jason Campbell, who gained notoriety as the "TikTok Doc" for viral hospital dance videos during the coronavirus pandemic. In a text message included in the legal complaint, Choo told the unnamed complainant that it was "never worth it" to report sexual harassment.

Choo continued to interact positively with Campbell after she was notified of the assault in early 2020. In June, Choo posted a picture of them together at a protest and helped promote his dance videos; and then in October, she referred to him as one of her "friends with big followings and hearts." When the complainant questioned why Choo continued to promote him after learning of sexual misconduct, Choo said she declines to take criticism from white people.

"I don't need policing by White women," Choo wrote in a text message.

Time's Up didn't respond to a request for comment on the allegations against Choo. 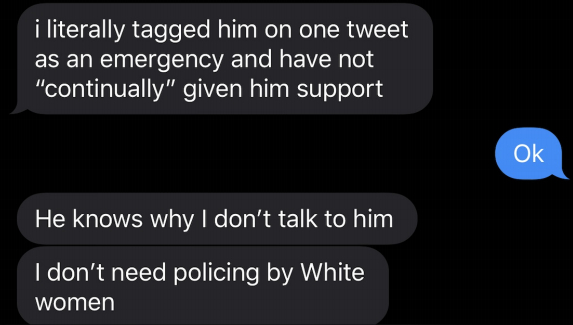 The alleged assault happened at a Veterans Affairs Medical Center in Portland, Ore., where Campbell sometimes assisted with patients. According to the complainant's lawsuit, Campbell snuck up behind her while erect and pushed her into a desk with his body. The complainant texted Campbell after and told him to never again invade her physical space, but he continued to text her afterward, asking for "another hug" and even attempting to invite himself to her home. The incident came after months of sexually charged social media and text messages, including a picture of his erect penis.

Choo was made aware of the assault as well as incidents involving other women and Campbell, the lawsuit says. She was provided a written report with screenshot evidence of Campbell's actions on April 9, 2020. The next day, Choo messaged the complainant that coming forward was "never worth it" but offered to have a "sit down" with Campbell to discuss the allegation. The lawsuit says Choo failed to report the allegations to her superiors, as she is required to do by the teaching hospital's Title IX program.

Choo remains featured on the Time's Up website, along with a quote promising that harassment concerns are "not ignored or forgotten."

"To all those affected by harassment across the health professions, please know this: TIME'S UP Healthcare is committed to fighting on your behalf and to ensure your concerns are not ignored or forgotten—today, tomorrow, and as long as it takes," Choo is quoted as saying.

Choo currently is available for paid speeches on "what it would look like in health care if there was no harassment."

The University of Florida's teaching hospital, where Campbell was recently hired, placed the doctor on leave after they received word of his sexual misconduct allegations.

The Oregon Health and Science University hospital did not respond to a request for comment on Choo's actions.

Published under: Sexual Harassment, Time's Up