The Victorian architect George Gilbert Scott was born in 1811, died in 1878, and somehow managed to fumble just about everything in between. Gone, mercifully, are many of the 43 workhouses he helped design, making his first fortune in the boom of public building that followed the New Poor Law of 1834. But plenty of his later Gothic Revival buildings are still around: a set of stains across the architectural manuscript of England, like ink blots flicked by an industrious but inept schoolboy from the nib of an old steel pen.

It’s not surprising, really, that representative samples of Scott’s work survive. The man oversaw the construction of at least 800 buildings in the nineteenth century, and not even the Second World War or the English tear-it-all-down fad of the 1960s and 1970s could destroy them all. And so we can still find some of Scott’s private houses: the drafty, awkward things he foisted on the rich during the Victorian craze for everything Gothic. We still have memorials he built, cathedrals he designed, and church restorations he undertook—my God, the old churches he vandalized—together with any number of the hotels, railway stations, and architectural odds and ends he slapped together during his career as the most productive designer in England. 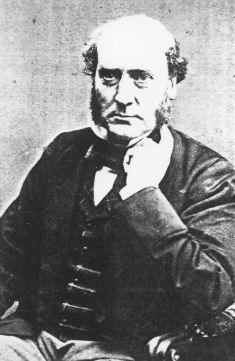 You know how a single beaver, working hard, can ruin an entire grove, leaving nothing but the stumps of trees and a flooded meadow? That’s our George Gilbert Scott. His exteriors typically managed to be both hackneyed and peculiar, over-sized and out of balance attempts at the Gothic, while his taste for interiors ran somewhere south of a New Orleans bordello. The man was a disaster of an architect, his buildings completely unredeemable … except perhaps for the small but troubling fact that nearly everything built after him is even worse.

Bad taste Scott may have had, but at least it was a taste. A demon for decoration may have possessed him, but at least he wanted to decorate. His grasp of past styles was inaccurate and piecemeal, but at least he was trying to stay connected to the accumulated wisdom of the architectural ages. Every building he constructed—every photograph in the beautifully illustrated new biography, Gothic for the Steam Age—is eye-catching, even when it fails. To look at his any of his works is to think: Yes, that’s more interesting, more human, and more fun than where I now work or live or go to church. The Victorians may have had bad architecture, but we have worse.

The novelist E.F. Benson once suggested that houses should be judged by how good they are for playing hide-and-seek (and in those terms, he thought, the bishop’s residence in Lincoln, where his father had served, was the greatest house in the world). This, at least, is something Scott would have understood. His buildings are always nooked and crannied. Inside and out, they’re filled with little odd spaces and cubbyholes and protrusions. Whitehall, the famous foreign-office building Scott designed for the British government, looks like a wonderful place for hide-and-seek (as foreign ministers have been complaining for over a century).

Meanwhile, the Midland Grand Hotel at St. Pancras Station in London, one of Scott’s most visible buildings, is replete with the stray details that make a place seem interesting. The Nikolaikirche, the Lutheran cathedral he built in Germany, was for a short while the tallest building in the world. Only its spire survived Hamburg’s fire bombing during the Second World War, but the drawings and contemporary accounts suggest it must have been a remarkably articulated and panoplied church.

The Albert Memorial, now . . . bah. In the twentieth century, the top-heavy monument was chosen by the cognoscenti as the archetype of all that was silly and wrong-headed about nineteenth-century design. Given the twentieth century’s own architectural record, that’s almost enough to make one defend Scott’s monstrosity, but the truth is that Scott was not at his best in monuments. The understatement of pure architectural line was alien to him—and that, combined with his penchant for knobby decoration and polychrome brick, often made his monuments seem like discarded bits of unfinished buildings. The Martyrs’ Memorial that Scott designed for St. Giles’, Oxford, looks so much like the sawn-off top of a cathedral that (legend has it) students would tell tourists the memorial was the spire of an underground church—and then direct them toward the entrance of some underground toilets nearby. 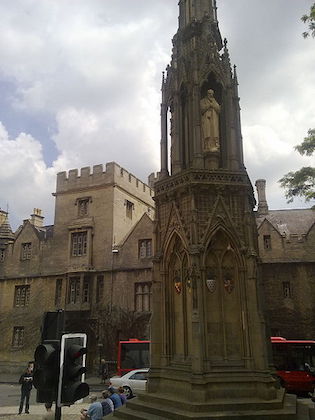 But that 1841 Martyrs’ Memorial does mark something important. The history of the Gothic Revival is as convoluted and strange as the architecture itself. Augustus Pugin in England, the moving force behind Big Ben and the Palace of Westminster, and Viollet-le-Duc in France were the stars of the movement, with John Ruskin laying out the theory in such books as The Seven Lamps of Architecture and The Stones of Venice. And compared to those figures, George Gilbert Scott was only a workhorse—not the intellectual or artistic force behind the movement.

Still, the Gothic Revival before Scott had a tinge of the Roman Catholic about it, or at least a hint of the bells and smells of the catholicizing Oxford Movement within Anglicanism. The High Church leanings of the influential Cambridge Camden Society, when matched with such events as Pugin’s conversion to Catholicism, suggested that the great rebuilding of the Anglican Church and English architecture in the nineteenth century required a return to the medieval and a turn against Protestantism. The Martyrs’ Memorial was commissioned as a blow against the Oxford Movement, commemorating Cranmer, Ridley, and Latimer, who stood against what the monument calls "the errors of the Church of Rome." Scott’s design, in the vocabulary of the Gothic, proved a symbolic claim that modern Protestantism was not excluded from the riches of the medieval past—and thereby the memorial licensed the use of the Gothic for any modern purpose.

The pictures in Gavin Stamp’s Gothic for the Steam Age suggest that Scott may have been at his best in some of his smaller work. However such prominent commissions as Whitehall, Exeter College Chapel, and the hotel at St. Pancras seem to define Scott’s legacy, he understood charm, as well. His flint-cobbled chapel of St. Barnabas at Ranmore Common simply won’t be described without the word charming.

The Walton school he built in Warwickshire shows a quiet whimsy. Brownshover Hall in Rugby, the country church of St. John the Evangelist in Surrey, the grand country house of Walton Hall, the library in Lewes: Scott poured out designs that connected with what Pugin had called the "truth of architecture" in the craftsmanship of the medieval past. Whether Scott routinely failed or not is a separate question. At least he tried, and sometimes with a charming success.

In 1963, the iron-girder Gothic of Penn Station was torn down, the train station reduced to a cellar beneath Madison Square Garden. Where New Yorkers once entered the city like gods, the architectural critic Vincent Scully complained, they now scuttle in like rats. For a long while, I took the destruction of Penn Station as the great symbol for all that is wrong with a modern architecture that lost contact with the life of the past—the human aspiration and uplifting effect of proper building.

After reading Gavin Stamp’s biography of George Gilbert Scott, however, I think the work of the madly productive Victorian will stand as a better image. Scott wasn’t a genius, and his works are rarely masterpieces. But however much he fumbled at it, like a schoolboy lisping his way through the Latin of Cicero, he was still speaking a language of architecture that expressed the built space of living beings rather than the rooms of machines. And isn’t the greatest indictment of more recent architecture the fact that such a man’s buildings are so much better—so much more interesting, human, and fun—than our own?

Anatomy of a Pandemic

Stories To Chew On

From Sea to Shining Sea

At the Scene of the Crime