The Westminster library of the 17th-century antiquary Sir Robert Cotton was organized in a highly eccentric manner. Cotton used busts of Roman luminaries—Julius, Cleopatra, Augustus, Vitellius, and so on—to mark his shelves. Here, placed, perhaps inauspiciously, under Nero was a manuscript that contained four poems, all, it would seem, by the same author: an elegy in the form of a dream vision, a homiletic narrative illustrated with examples from Genesis and Daniel, a paraphrase of the Book of Jonah, and a chivalric romance. For centuries, no mention is made of Pearl, Cleanness, Patience, or Sir Gawain and the Green Knight, as we now call them, in the works of English bibliographers. They were unread and unknown, languishing first in the care of Cotton and his descendants, later in the Ashburnham House, also in Westminster, there surviving in 1731 a fire that somehow failed to consume the manuscript of Beowulf, and finally in the British Museum, until 1824, when they were rediscovered.

What do we know of the author of these four poems? Nothing save what internal textual evidence suggests. He lived in Cheshire in the late 14th century and was thus a contemporary of Chaucer, Gower, and Langland, although it is unlikely that he met any of them. His learning was both wide and deep. He seems to have read French and Latin and perhaps Italian. He was a pious man who knew his Vulgate well, though his theology was somewhat heterodox. He had been poor at least some of his life, though not, it seems, at the time of his writing. Critics, including the editors of the present volume, seizing upon the many detailed references to gemology and goldsmithing in Pearl, have suggested that he might have been a jeweler or otherwise involved in the minerals trade.

Gawain has been a syllabus item for decades, almost invariably in "translations"; but even future graduate students tend to remember only one thing: its so-called bob-and-wheel structure, in which a short line at the end of a stanza is followed by four shorter lines in an ababa pattern—a hobby horse, for whatever reason, of those responsible for the GRE English Subject Test. Reading W.S. Merwin or Marie Boroff’s serviceable but uneven versions of the poem, they learn almost nothing about philology, which would be a great pity in its own right were it not the case that, unlike so much else written in English before 1580 or so, Gawain is a literary masterpiece that anyone with a patient eye and a fair gloss can appreciate in something like its original form. 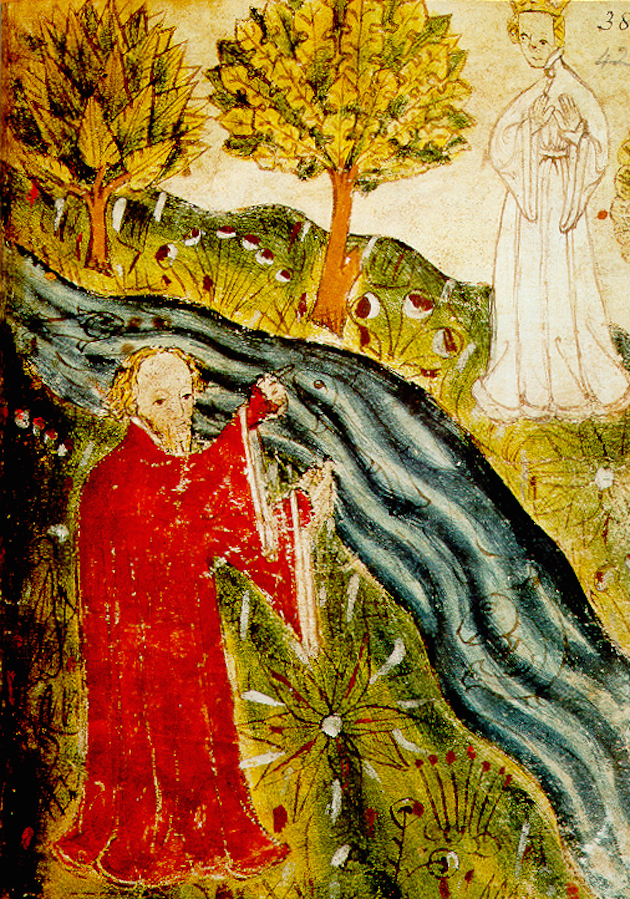 An illustration from ‘Pearl' / Wikimedia Commons

After the legendary origins of Britain have been recounted, in a wayward invocation that has doubtless been the undoing of many would-be readers, the narrative begins at Camelot, where King Arthur’s court have gathered for Christmas. Their revels, of which the poet gives a wry description, are interrupted by the appearance of a monstrous figure. The Green Knight, whose pallid complexion makes one wonder whether the author might have been familiar with the symptoms of anemia, rides into the hall astride an equally green mount. With a bough of holly in one hand and a great axe in the other, he dares the young monarch to strike him with his weapon, saying that he will give as good as he gets in a year and a day’s time. Sir Gawain, the youngest of the knights present, beseeches the king to allow him to deliver the blow in the royal stead:

Gawan gripped to his axe and gederes hit on hyghte

The kay fote on the folde he before sette,

That the scharp of the schalk schyndered the bones

And schrank thurgh the schyres gres and schede hit in twynne,

That the bitte of the broun stele bote on the grounde.

The Green Knight casually lifts his severed head from the floor and brandishes it in the face of the ladies; the head opens its mouth to remind Gawain that he must meet his challenger next year at a place called the Green Chapel to take his turn under the blade.

After a short interlude we meet Gawain again on a cold winter morning when he sets out on his doomed journey. Here the grotesquerie of the Green Knight’s entrance and the random beauties of the early lines describing the change of seasons ("When the donkande dewe dropes of the leves / To bide a blysful blusch of the bryght sunne") give way to brooding and even terror. Gawain arrives at a castle, where the master, one Bertilak de Hautdesert, tells him he is two miles from the Green Chapel and asks him to stay a few days. What comes afterward—the first sight of the crone, the repeated temptations from Hautdesert’s wife, the bargains and the exchanges of gifts, the concealed girdle, and the fateful meeting with the Green Knight, whose identity we at once find shocking and not at all—is as haunting and surreal as anything in English.

Pearl, more so even than Gawain, is the sort of poem to the study of which one might devote one’s life. Among the most intricate works of its kind ever conceived, it comprises 101 stanzas of 12 semi-alliterative lines with a rhyme scheme of ababababbcbc in which a crucial word from the end of each stanza is repeated at the beginning of the next: a perplexing configuration from which clues about the author’s surname and an allusion to the 144-cubit walls of the New Jerusalem (12 × 101 = 1212; 12 × 12 = 144), among other arithmantic wonders, have been divined.

It is unfortunate that the most widely read elegy in our language continues to be "Lycidas," a sulkily anticlerical piece of verse that is otherwise mostly about water, rather than this moving lament for the author’s two-year-old daughter, written at a time when one out of every three children died before the age of five. In Pearl a man wanders in a garden mourning the loss of a "privy perle withouten spote," which, we soon guess, did not issue from the mantle of an oyster. After falling asleep under a tree, he finds himself in a fantastical landscape surrounded by "crystal clyffes" and trees "as blwe as ble of Ynde":

As burnist sylver the lef on slydes

That thik con trylle on uch a tynde;

Across a stream he sees a maiden, whom he recognizes as his lost child, restored to life and crowned as a Bride of Christ. When he asks her how, despite her early death, she has accrued such heavenly merit, she responds with a beautiful soteriological discourse in which she expresses views somewhat at odds with the spirit, if not the letter, of the medieval church’s teachings about the necessity of good works for salvation, and, it will seem to some readers, hinting at a kind of universalism. She then grants him his wish of seeing the New Jerusalem, which is described in language reminiscent of Revelation 21:11-21, so long as he agrees to remain on his side of the stream. Ignoring the maiden’s instructions, he attempts to cross the river of life and awakens. Though saddened to return to "this doel-doungoun" of ours, he vows to live the rest of his life in blissful obedience to God in anticipation of that day when, like his daughter, he will be one of the "precious perles unto His pay."

It is nice to have both these wonderful poems, along with Patience and Cleanness, in a new edition by Ad Putter and Myra Stokes. Spelling has been more or less regularized. Þ and ȝ have been replaced by th and y throughout. At this and various other slight modernizations, purists will blanche, but they will have E.V. Gordon’s beautifully printed and unsurpassable edition of Pearl on the shelf already. The exhaustive glosses and copious notes—more than two pages for every one of already heavily annotated verse—will make this volume useable by undergraduates and other curious readers with little experience of Middle English.

The Works of the Gawain Poet is a model of popular scholarship, one that harkens back to the glories of the old historical criticism of Tolkien and Henry Sweet. That it has appeared not under the imprimatur of a university press but as a reasonably priced paperback from Penguin Classics is a pleasant surprise. It belongs on the shelves of every library in the English-speaking world.

Neither Shaken Nor Stirred

Scenes from the Supply Chain

REVIEW: ‘Eurotrash: Why America Must Reject the Failed Ideas of a Dying Continent’

The Low Priest of Pop