Last October Michael Ruhlman came out with his latest cookbook, From Scratch: 10 Meals, 175 Recipes, and Dozens of Techniques You Will Use Over and Over. For years the bestselling food writer has been urging us to cook more for ourselves because it's healthier than eating out. From Scratch just happened to be his latest plea. It's a gorgeous book that weighs a couple pounds and is priced at $40, appealing to those of us who tend to mess around in the kitchen. Five months later, that would be all of us.

With many restaurants still closed, Americans have turned in droves to home cooking—whether they wanted to or not. The transition has not been smooth. Coronavirus infections have disrupted supply chains, forcing nearly 50 meat processing plants to shut down nationwide. And it's not just beef and pork: "Boneless chicken is first to go scarce as coronavirus hits U.S. meat supply," Fortune reported last month. Bad enough there's a shortage of chicken—but boneless chicken? What's left for us to cook?

Americans consume more chicken than any other protein, and for obvious reasons: It's cheap and conveniently packaged by part (thank John and Don Tyson of Arkansas for that innovation). Last year, according to the National Chicken Council, Americans ate 96 pounds of chicken per capita (versus 58 pounds of beef and 52 pounds of pork).

Most of it was boneless. The data site Statista confirms 61.7 percent of chicken sold in the United States last year was boneless breast, far outselling legs, wings, and thighs. Whole birds, on the other hand, account for only 6 percent of all poultry purchases. If this comes as a surprise, ask yourself when was the last time you bought an entire bird. On a recent visit to my local supermarket, I asked Lizzie the cashier how many whole chickens she typically scans during her shift. She paused for a second, shook her head, and said, "No, I don't."

Yet during this time of unpredictable shortages, that whole chicken may be our best bet—a nourishing food source that can last up to a week and is remarkably easy to cook.

Which brings us back to From Scratch. While Ruhlman devotes chapters to the omelet, steak frites, and lasagne, among other classics, he opens with roast chicken, which clearly holds a special place in his heart.

"When a chef imagines a meal that makes him or her happy," he writes, "it's a roast chicken that most think of, the crispy-skinned bird still in its roasting skillet, fat sizzling, set on a trivet at the center of a table around which family and friends have come together." In fact, a golden chicken in a skillet graces the book's cover.

"Home" is what comes to the author's mind. "The greatest sense of ease and pleasure. That's what roast chicken means to me: home."

And since home is where we're all currently stuck, why not add some ease and pleasure by roasting a whole chicken?

Mine was a fairly small bird, weighing 3.92 pounds, from Bell & Evans and costing $15.64 at Whole Foods. There were no giblets to remove so I simply washed and dried it inside and out (holding the bony carcass can take a little getting used to). Ruhlman says to "sprinkle the chicken liberally with [kosher] salt; you should have a nice crusty layer of it across the whole bird." This may take some self-convincing if you grew up with parents averse to salt (and if they did use salt, it was Morton's iodized). 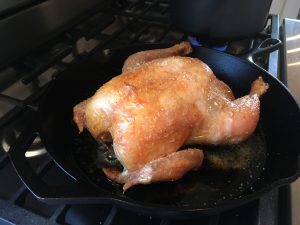 Something else your parents might not have done: sticking a zested lemon into the bird's cavity to prevent the meat from drying out. After that step I laid the bird onto my cast-iron skillet and popped it into the oven at 450 degrees. Precisely one hour later, the chicken was done, though not ready to eat. It needed another 30 minutes to rest, but this gave me more time to make the sides—mashed potatoes and green beans sprinkled with the zest from that lemon.

Despite faithfully following the recipe, I was convinced my chicken was undercooked—it wasn't nearly as dark brown as I expected. The meat, however, was tender white all the way through and more succulent than any roast chicken I have ever had. I was so excited about the results that I gave Michael Ruhlman a call and told him all about it.

"You cooked a chicken perfectly," he said with a laugh. "You let it rest and that's all you need to do." He also recommended finding the smallest chickens possible as they tend to have the most flavor.

Although it was a small bird, it was more than enough to feed a family of four, and I saved the leftover meat for a chicken soup. And per From Scratch‘s suggestion, I saved the bones to make a stock, which required leaving a pot in an oven at 200 degrees overnight for eight hours. I confessed to Ruhlman that leaving the oven on through the night left me with little sleep. "Get over it," he said. "Two hundred degrees isn't enough to boil water. When was the last time you did a braise and couldn't sleep?"

The stock did turn out great—a deep, rich brown the next morning. And the soup, filled with shredded chicken, celery, carrots, and pasta noodles, was bursting with more flavor than any can of Progresso.

Of course, it can be a challenge to convince people the above experience was not just a chore. "It's a way I relax after a day of writing," Ruhlman told me. "A lot of people come home—well, they used to come home from the office—they had kids, they were beat, and some people just don't like it. And I get that, that's fine. Everybody shouldn't need to cook, but somebody in your clan has to cook, and usually there's somebody who actually enjoys it. So for me it's meditative." As he put it, "I calm my brain by mincing an onion."

The other challenge is time. If roasting a chicken, cooking a stock overnight, and making soup sound time consuming, well, it is. "Cooking takes time," Ruhlman says in From Scratch. "So does going out to eat. So does watching TV while you wait for food to be delivered. Everything takes time."