New York City police officer Miosotis Familia was fatally shot in the head on Wednesday while sitting in a police vehicle in the Bronx.

Familia, a 48-year-old mother of three, was shot by Alexander Bonds, 34, according to the NYPD. Familia was rushed to St. Barnabas hospital, where she died during surgery, the New York Post reported.

Bonds approached Familia at 12:30 a.m. and shot through the window of the vehicle without warning, sources told the Post. Familia was sitting inside a temporary headquarters vehicle at East 183rd Street and Morris Avenue in Fordham Heights.

A law enforcement source told the Post the shooting appeared to be a "cop assassination." 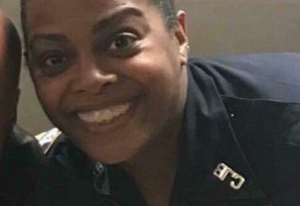 Bonds was on parole for a 2014 robbery in Syracuse. He was also arrested in 2001 for beating up an officer with brass knuckles in Queens.

Sgt. Keith Bryan and Officer Joseph Ayala found Bonds a block away from the crime scene where he was shot and killed.

Familia, a 12-year NYPD veteran, received a final salute from fellow officers as her body was being transferred to Bellevue Hospital in Manhattan.