My Week With a Feminist Activity Book

Parental warning: The contents of this feature and of contemporary feminism are not suitable for children

On the cover of The Feminist Activity Book, there is an object I mistook for a red, white, and blue rocket-ship popsicle. I was, you can imagine, a bit taken aback when a colleague explained to me that it was a (used) sanitary device.

This was the first of many revelations, disillusionments, epiphanies, and nasty little shocks that were in store for me as I worked through the 40 or so pages of activities in this volume. My notes sum things up nicely: "Is that a—?"; "Those are real things that people use?"; "WHY?" "They’re allowed to print that?"; "What if a child picked up the book?"; "I have never heard of this."

One thing I discovered early—in fact, on page two—is that I am very, very bad at coloring. Crayons, colored pencils: It doesn’t matter. I can work in the lines for about ten seconds before I get impatient and start scribbling faster than my head can remain steadily between the black lines. Even when I make a conscious effort to go as slowly as possible, I find that I am not pressing my utensil down hard enough—when I notice this, I overcompensate and my lines bleed through the page. 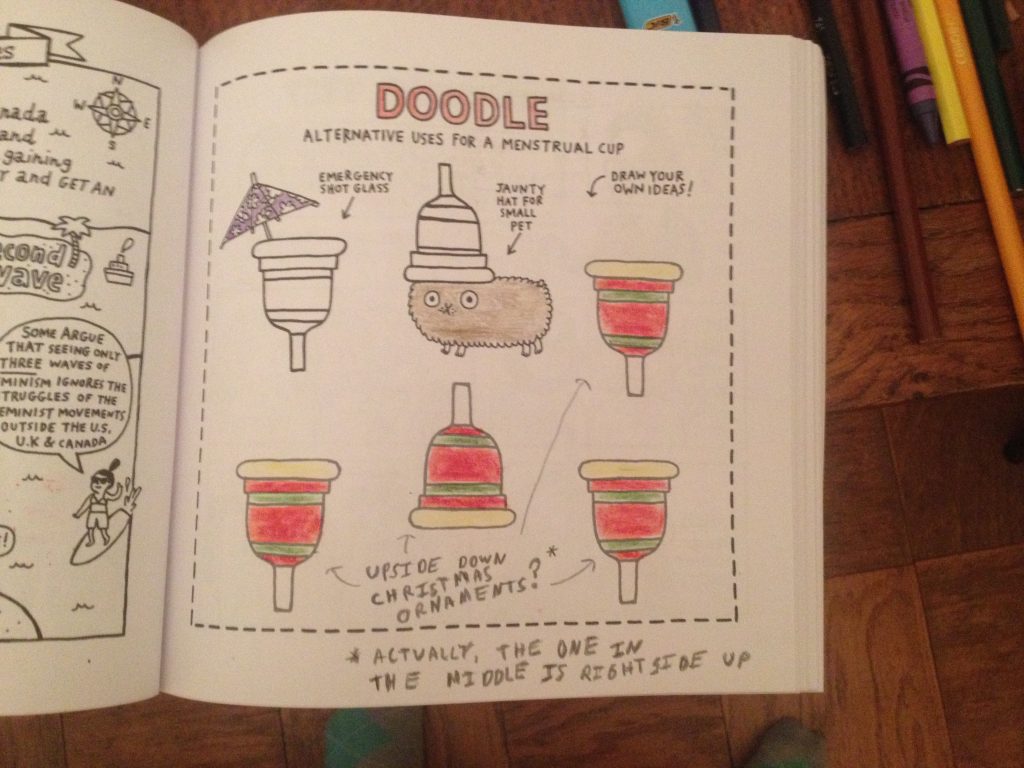 I don't know what the color these are supposed to be, so I left the non-ornaments blank…

On the subject of blood: There is a lot of it in this book. On one page, the reader—user? aspiring feminist?—is invited to do what is called a "Color In": "SCREW THE EUPHEMISTIC BLUE LIQUIDS OF COMMERCIALS. GET YOUR RED PENS AND PENCILS OUT AND GO TO TOWN ON THESE MENSTRUAL PRODUCTS. MAKE ‘EM GOOD AND BLOODY!" Another activity suggests "alternative uses for a menstrual cup." I had no idea what these bizarre bell-shaped devices were, nor did my wife, but I colored them and pretended that they were Christmas ornaments.

I found further use for my red crayon in the "Doodle" pages in which we are asked to "design some awesome (if impractical…) condoms!" (Examples given include "Camo," "Frilly," "Cargo," and "Formal.") I abhor contraception and could not even come up with something funny, so I wrote "BANNED" in angry letters on 12 of the prophylactics and drew a large X over them. 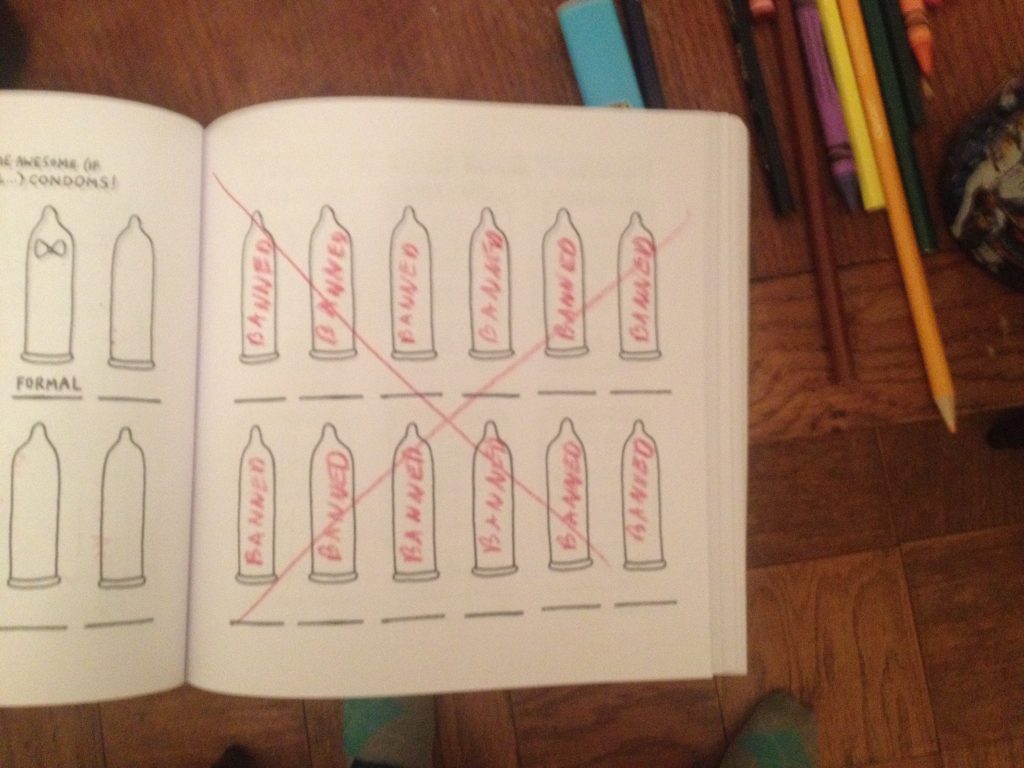 This book is full of smut. Among the things we are expected to color are a morbidly obese woman who tells, via word balloon, "All bodies are good bodies," a headless, indeed torso-less vagina, and a large collection of what are called "sex toys." I suppose people would call BS if I said that I don’t know what a "dildo" is: The word goes back at least as far as Nashe and Johnson, and among the many prurient volumes in Pepys’s library is a manuscript for a song called "The Maids Complaint for want of a Dil Doul." I’ve obviously heard of whips and shower heads and even, alas, vibrators. But most of this stuff was as new to me as it was sinister: Please tell me that you, too, dear reader, have no idea what "Ben Wa Balls" might be. The only way I was able to make it through this page was by pretending that each item was something other than what it says it is. Take the Ben Wa Balls: to me they looked like the kind of sunglasses Kate Hudson wears in Almost Famous. The "Ball Gag" reminded me of a clown’s nose; the "Magic Wand," a Nintendo controller. The "Penis Sleeve," I’d say, bears more than a passing resemblance to a Chinese finger trap, and the "Rabbit Vibrator" looks like a toy microphone with a bracelet or an oversized diamond ring wrapped around it. Only by these metaphors was I able to endure. 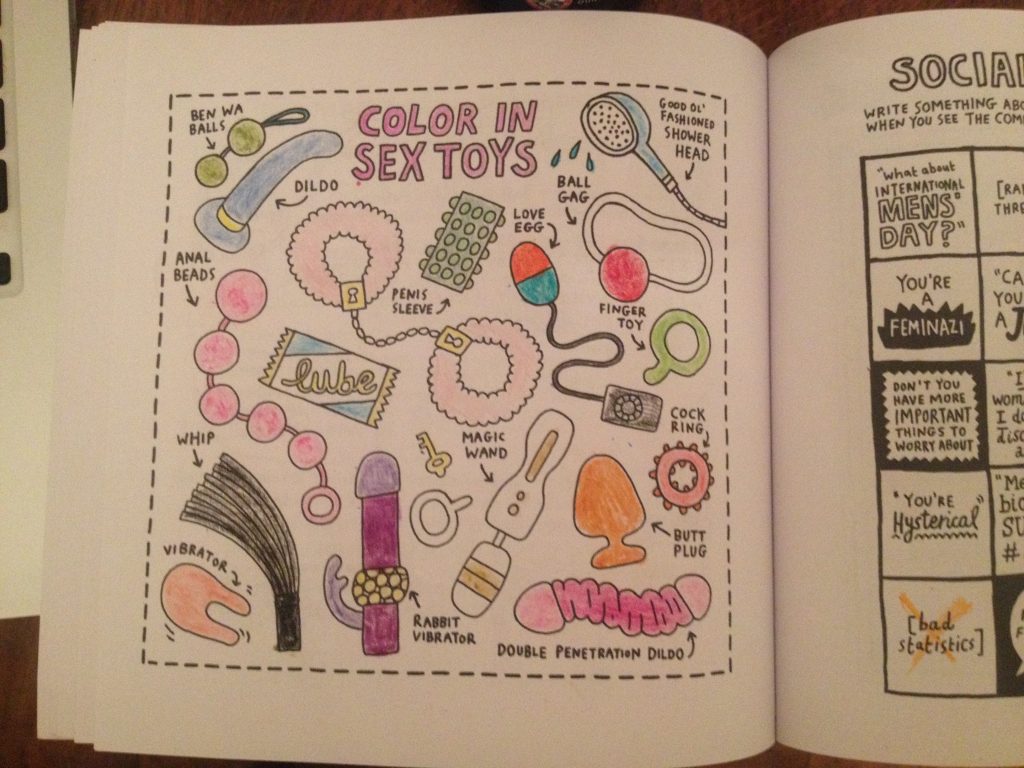 I was very grateful for the faint, if not very sincere, hint of prudishness on the "Here are Some Male Nipples" page, which asked me to color and cut out 30 little circles and "stick them over unsightly female nipples to make acceptable to be seen in public or on social media." Unfortunately the circles did not resemble anything I’ve ever seen on a shirtless man. They did, however, look very much like doughnuts, so I gave some of them pink icing, some chocolate frosting, and the rest powdered sugar. 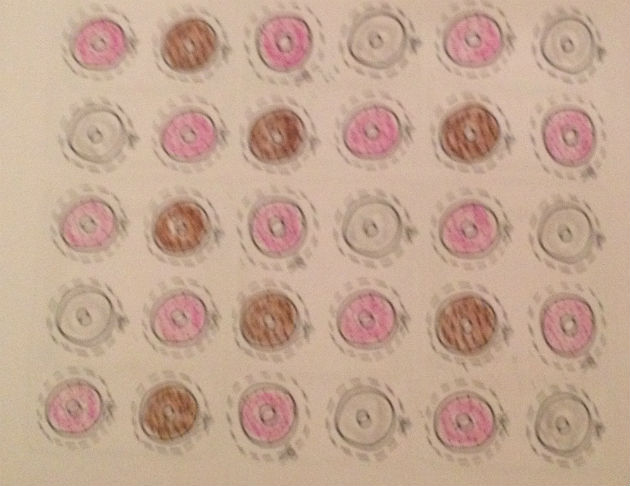 There are other, more mundane activities here. Some of these, such as the feminist valentines and the fill-in-the-blank conversation starter cards ("What do you think the age of consent should be?" "Marriage") were almost fun. I enjoyed mocking up a cover of my own women’s magazine using a Mad Libs-style format, coming up with three additional feminist marriage badges ("Great Driver!"; "BAD COOK AND PROUD"), and designing four of my own feminist t-shirts ("1-22-73"; "Feminists can run sweatshops, too!"). It was nice to recognize that many of my favorite films—from Picnic at Hanging Rock to Snow White and the Seven Dwarfs—pass the Bechdel test, which consists of noting whether a given film features two or more women talking about a subject other than a man. I added Hole’s immortal "Violet" and Loretta Lynn's "Happy Birthday" to the feminist playlist, where they stand beside "Survivor" and, weirdly, "Been a Son." I even wrote some mini reviews and assigned star ratings to things I’d read from the Feminist Book Club: I gave Mrs. Dalloway five stars, but Judith Butler’s inscrutable Gender Trouble (random sentence: "Irgaray would maintain, however, that the feminine ‘sex’ is a point of linguistic absence, the impossibility of a grammatically denoted substance, and, hence, the point of view that exposes substance as an abiding and foundational illusion of a masculinist discourse") got only one. I wish I had done a better job helping Rashida to "find her way to work without encountering any patriarchal bullshit": the first path we took led us straight to the Old Boys’ Club ("GET OUT!"). We doubled back and came almost within striking distance of the Wage Gap before turning around yet again, grinning and bearing it past the Old Boys again, until suddenly—BAM! sexual harassment. I hope she didn’t spill her coffee. 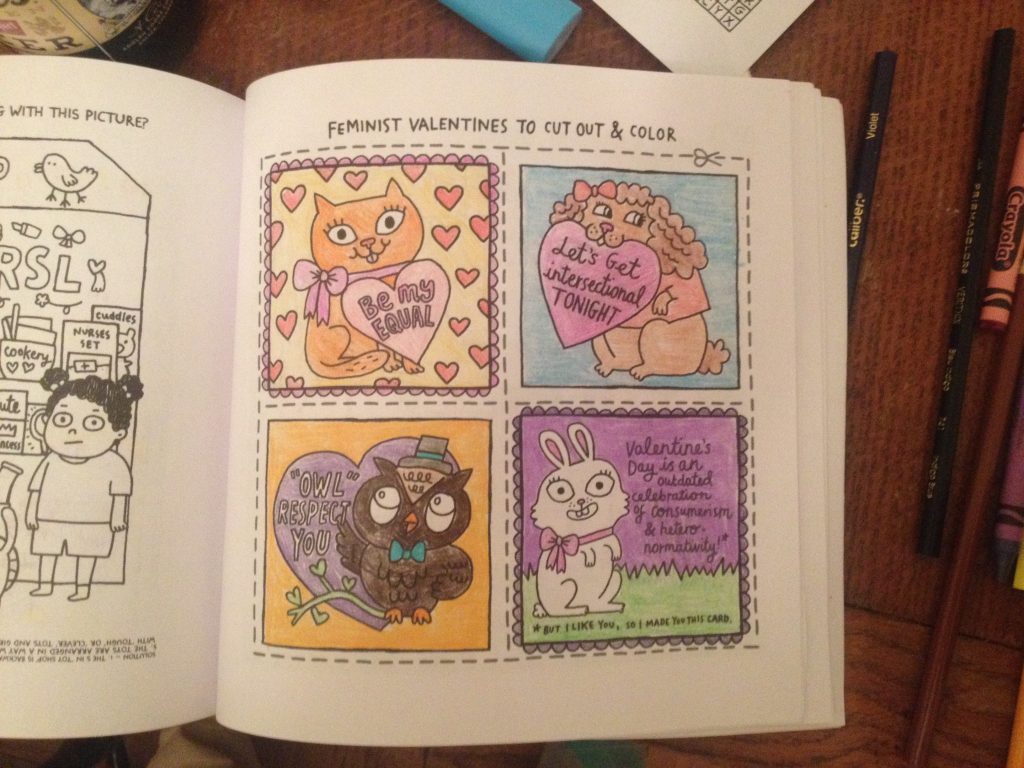 Some of the non-coloring activities were very taxing. It was easy enough finding all 26 women in the "Where’s Wendy?" maze of male Fortune 500 CEOs but, try as I might, I could not locate "EMPOWERMENT" in the word find, not even after I looked at the page in the back that contains the solutions. Speaking as a dedicated fan of its counterpart in the Times Literary Supplement, I found the "Sexual Health Crossword" far too difficult. I was stumped after "Trans" and "Cis" in the gender identity quiz, and I’m still not sure if "Demi" and "Gender Fluid" mean more or less the same thing.

If all that sounds like a lot of work, it was. I didn’t even get a chance to color in the Betty Friedan and Ruth Bader Ginsberg Feminist All-Star Trading Cards, much less find the time to add Caitlyn Jenner and Sheryl Sandberg to the deck. Nor was I able to play "Social Media Bingo," which involves writing something about feminism on the Internet and waiting to see if anyone cites "bad statistics," links to a "bullshit article," or employs a "completely irrelevant analogy." I could think only of one additional third-person singular pronoun—"It," which I wrote in menacing Stephen King letters—to add to "He," "She," "They [sic]," "Ze," and "Xe" on the "Crafty Corner" pronoun badges page. The weirdest thing here was an additional badge proclaiming "Just my name please," with the note that "Some people prefer not to use pronouns at all." How, I wonder, would that actually work in practice? "Would you ask Tim what Tim is planning on doing when Tim finishes writing that stupid piece Tim has been working on in the office all by Tim’s self?" 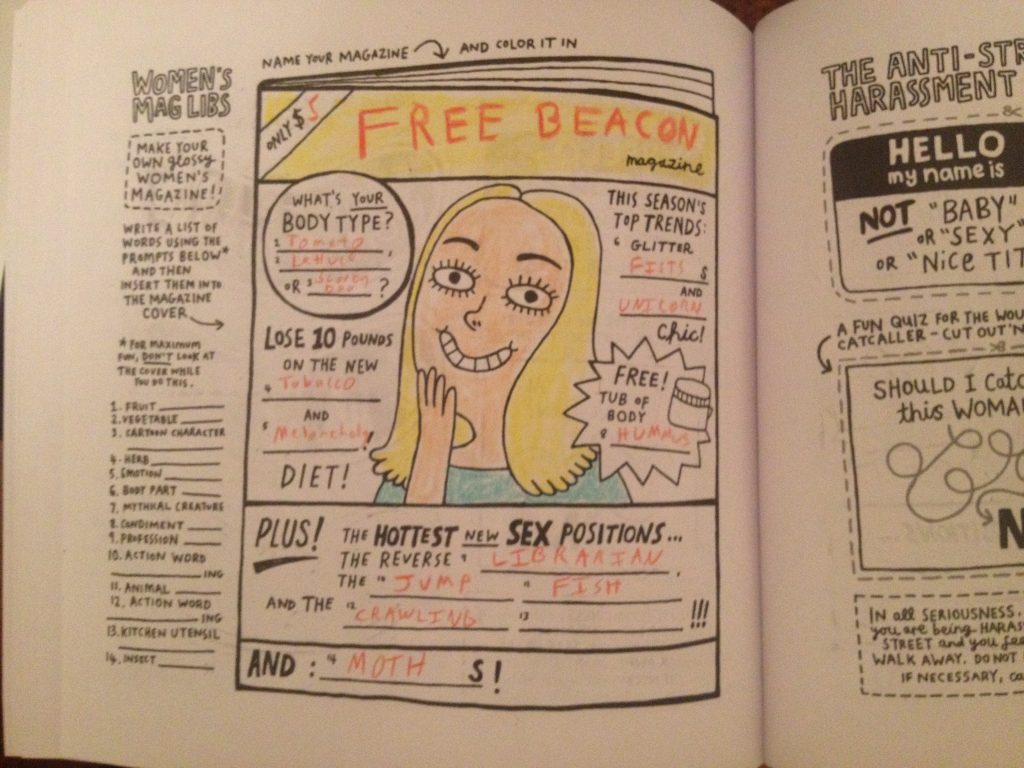 My main takeaway from The Feminist Activity Book was confusion. What does it mean to be a feminist in 2016? Crudeness, perversion, adolescent delight in the scatological? Fanatical support for legalized infanticide? On the first page under the heading "Are You a Feminist?" we are asked, "Do you believe that all people are equal, regardless of gender?" Ignoring the use of gender where I would say "sex," I unquestioningly answered "HECK YES!" and followed the arrow to a star-spangled caption that read, "Yay! You are a feminist." This is a question about metaphysical dignity. What does it have to do with "Anal Beads"? The impression that I was missing something remained a few pages later when I got to "A Feminist ABC": "S is for Suffragette"? Sure. "Y is for Yes Means Yes," beyond doubt. "E is for Equality." Of course. Ditto "M is for Maternity," the only mention of childrearing in this book, accompanied here by a somewhat baleful-looking image of a woman pushing an old-fashioned pram. But "D is for Democracy"? "G is for Genderqueer," "Q for Queer," "H is for Hair" (in this case unshaven leg hair), "P is for Planned Parenthood," "T is for Tampon"? By the time I got to "U is for Underwear," I had to ask whether Gemma Correll and editors thought this through at all. I felt the same way when I realized that, despite instructions inviting me to do so, I couldn’t even cut out my pronoun badge or my lavishly illustrated paper doll or even my anti-harassment street kit because there were activities on the opposite side. 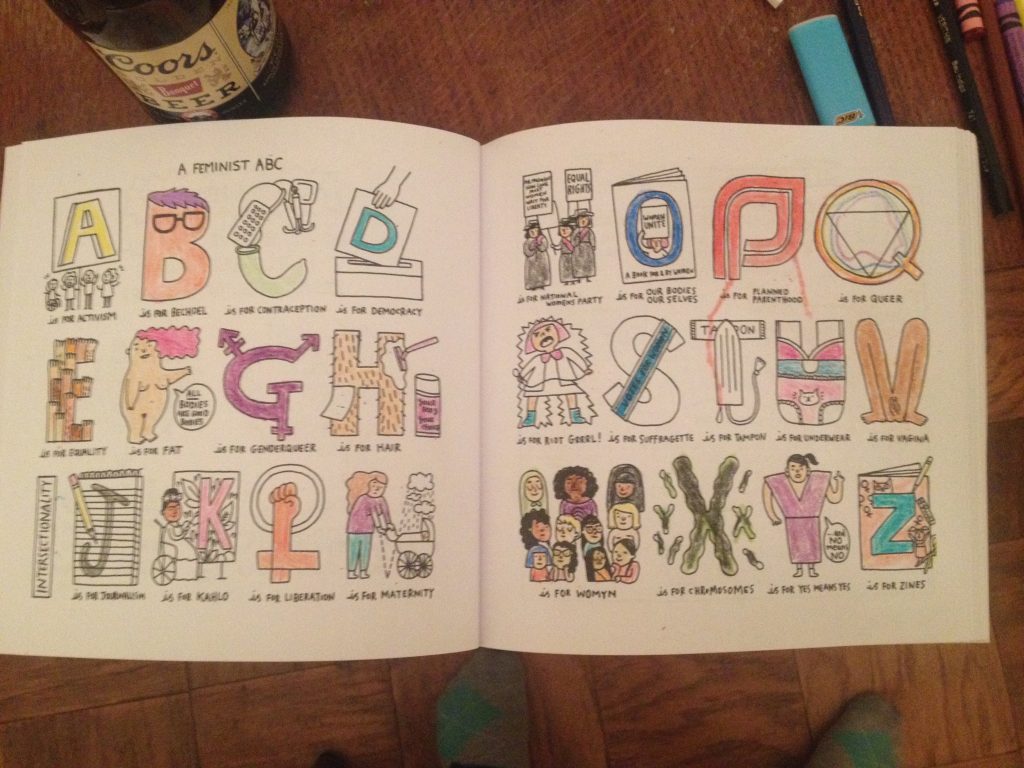 Near the end of this book, on the riddles page, we meet Elena who "doesn’t call herself a feminist because … she likes wearing make-up and pretty dresses." Turning the book upside down we read that she still is a feminist because the ideology "is not anti-feminine." Every other page of this book suggests not that this statement isn’t true but that it is meaningless because there is no such quality as "femininity," however loosely defined: being a woman is an accident of biology and women in general, beyond their ability to conceive and bear children, do not differ in any significant way from men in terms of their physical capabilities, personalities, habits, interests, and manner of dress. Presumably the opposite holds for men as well. But 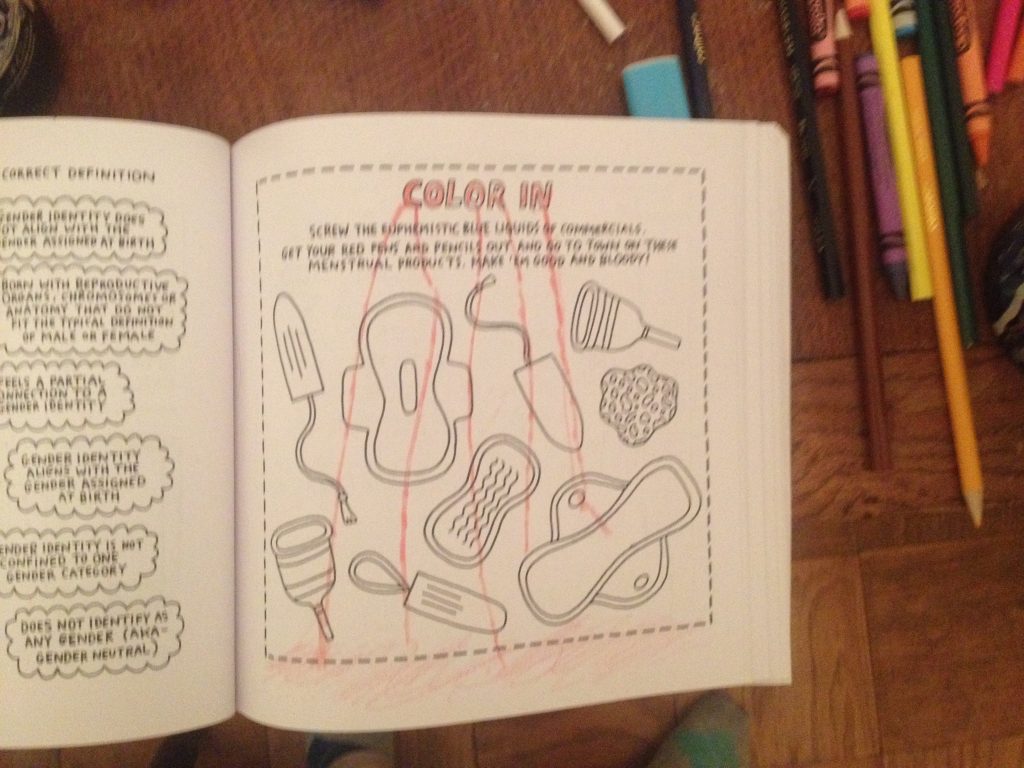 if there is nothing to being a woman beyond having one set of chromosomes and parts rather than another, what exactly is it that trans people are identifying with when they claim that, biology notwithstanding, they are really another gender?

The last thing I did with this book was turn to the colored-in "Destroy the Page-Triarchy!" section, which is meant to be desecrated ("Rip it up! Scribble all over it! Smash it with a hammer!").

"It’ll be cathartic," we are told. I used it to put out a cigarette, and it was.