My inbox is overflowing with reader complaints over recent coverage from senior writer Adam Kredo that raise persuasive concerns about his—and the Washington Free Beacon’s—commitment to combat journalism.

A few days after the New York Times ran an op-ed by Russian leader Vladimir Putin, Larry B. from Fort Wayne, Ind., sent me a link to Kredo’s August 2012 coverage of a protest in front of the Russian ambassador’s residence in downtown Washington.

The demonstration was organized by the Center for American Freedom (CAF), the nonprofit advocacy group that publishes the Free Beacon, to call attention to the Kremlin’s crackdown on the punk rock outfit Pussy Riot.

I did some digging. Kredo’s coverage of recent CAF protests outside Kremlin installations across the country has been non-existent. Not a single word of journalism in more than a year.

This raises troubling questions not only about Kredo’s professional integrity, but also about the very spirit of CAF and its devotion to the cause of freedom.

"It’s no wonder Moscow has been strutting around the Global Locker Room without a towel," wrote Reginald F., an expatriate based in Munich, Germany. "Obama’s whey-faced ineptitude is bad enough. If the Adam Kredos of the world refuse to even acknowledge the homegrown passion of the anti-Kremlin movement, then we’ll all be cleaning out our Freedom Lockers while Putin mops the floor with our tears."

When pressed on the issue, CAF chairman Michael Goldfarb said, "What protests? Who is this?" before hanging up.

I have also received dozens of emails demanding to know more about the nature of the Assad regime’s ties to Big Ketchup—i.e., the empire associated with the wife of U.S. Secretary of State John Kerry. The blogosphere is abuzz with speculation on such ties.

Yahoo!Answers user "Beelz Obama" wonders if the notoriously anti-war Kerry favors a strike on Assad because the Syrian dictator shunned the beloved condiment during a couple’s night out in Damascus in February 2009.

Where is the Free Beacon’s coverage?

You can probably guess the answer. And it is all the more distressing, considering some of the things that Adam Kredo has deemed newsworthy.

"If WFB drops big money to send Bill McMorris to a Juggalo freak-fest in Illinois, why not Kredoofus on the ground in Serbia [sic]? Don’t care if he coms back," writes Chuck H. of Weehawken, N.J.

Rufis K. from Waterville, Maine, took issue with Kredo’s use of the term "Western missiles" in describing the intercept capabilities of a new Iranian warship.

According to Rufis K., Kredo may be intentionally avoiding a specific reference to U.S. Tomahawk cruise missiles for reasons of political correctness.

"Tomahawk Tomahawk TOM A HAWK!!! Do i really hav [sic] to explain? what they’ve done is taken the name of a combat device that was used against MY ancestors and appropriated that into the context of our modern warfare time," Rufis wrote. "Adam Kredo can run from the PC police all he wants—but he can’t hide from history."

The readers said that the story, "Weiner Erupts at Jewish Voter," did not make it clear enough that the voter yelling at Weiner in a Brooklyn deli was Jewish.

Although I thought the headline was reasonably straightforward, I hesitate to defend Mr. Kredo. Consider the following passage: 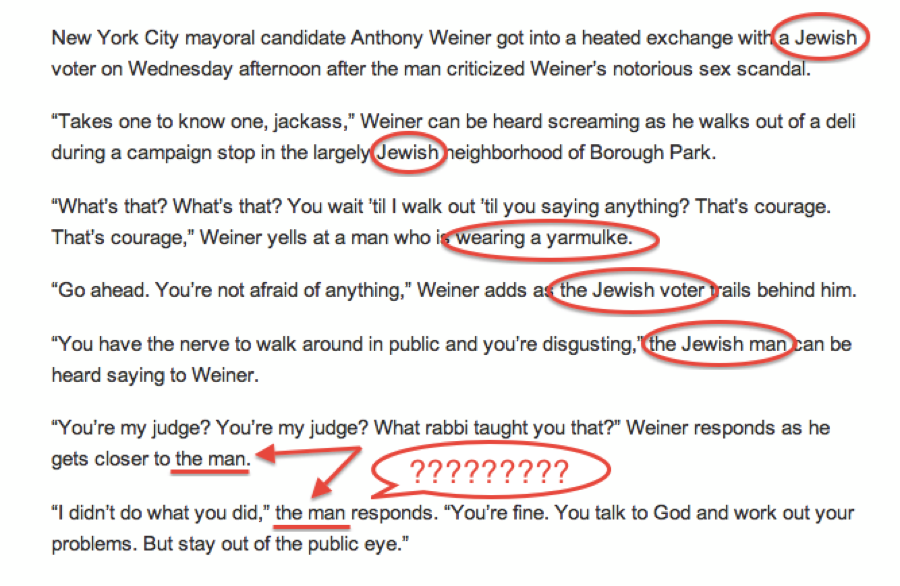 What happened here is clear: The author became lazy as he approached the end of his story. That led to reader confusion and aggravation.

Kredo may not have crossed a red line, but most readers would appreciate it if, from now on, his writing was, in the words of Stacy J. from Houston, "less terrible."

Reached at his basement in Maryland, Kredo defended himself with what can only be described as some kind of braided leather whip.