The 20th century German theologian Karl Barth once said that woman "is in her whole existence an appeal to the kindness of man." Jean-Baptiste-Camille Corot (1796-1875) saw in women something more—a side of them undefined by the male gaze—and captured this in his portraits of women that can be seen in the National Gallery's exhibit "Corot: Women," open until Dec. 31. Perhaps this is because his stalwart mother provided the primary source of income for his family with a substantial dowry and her successful milliner shops in Paris. From his early years, he recognized that some women could seize a sense of independence that many were denied. His portraits of women convey dignity and strength, not a Barthian fantasy of seduction or feudal delicacy.

Corot is famous for his landscapes, which glow with silvery colors, and for a neoclassical style that flirted with loose brush impressionism. But his portraits deliver such manifold emotions that it makes one wish they did not make up such a small portion of his oeuvre. Some single artist shows of portraits could be rushed through for sheer repetition of subject matter. Corot's models, however, are each unique and enchanting. Not one can be ignored.

"I am not one of your specialists in little pieces," he said. "My endeavor is to express life. I need a model who moves." Corot is less of a star of the show than the mysterious women he painted. Women do tend to be more complex subjects in a portrait compared with men, at least from the sixteenth to nineteenth century. Men are shown in unvarying "strong" postures—they must reflect conventional masculinity, solidity, power, and not much more. But for women, their restricted selection of life choices and the burden of creation resting on their shoulders resulted in a wider range of emotions on the canvas. 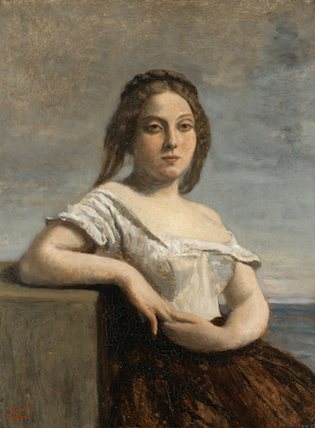 Models, from the Renaissance to Corot's time, were seen as just short of prostitutes (and many of them were). The artists' studios were surrounded by salacious lore. Writers Edmond and Jules de Goncourt assumed Corot was "having his fling every month with some filthy model who comes to see him." But this was not the case, notes the National Gallery's curator of French painting Mary Norton. His models called him "Père Corot": He treated them with a mutual respect and rarely turned them away. He encouraged his models to talk, sing, dance, to just be themselves, and you can see it in their faces.

Corot's portraits of women capture emotion beyond the physical appearance—his detailed brushstrokes linger around sultry, smoldering eyes or jaunty, challenging smirks. "You have to experience your model over time, the range of animating moods and emotions, in order to penetrate her character," he said. "The touch must be sensitive to this mobile soul, not a portrait just of a moment as you get in a photograph, but rather a more profound portrait."

His small portraits harken back to the Dutch masters, but with more fluid, less detailed marks. Their similarity lies in the beguiling light that illuminates the figures and lifts them off the canvas, as in Young Italian Woman from Papigno with her Spindle (1826-27) and Woman of the Swiss Highlands (1845-50). Corot's use of vaguely brushed, smoky backgrounds of rocky coastal settings also recall Renaissance masters; so do the chimerical flower crowns adorning the women's heads, as in Poetry (1865-70) and Woman with a Pearl (1868-70).

Even in the portraits of women with downcast, pensive gazes, like in Melancholy (1860), Corot manages to suggest their emotional magnitude with small details. In The Blonde Gascon (1850), a dignified raised eyebrow suggests a daring and challenging spirit. Her personality bursts force, overwhelming the seascape behind her. 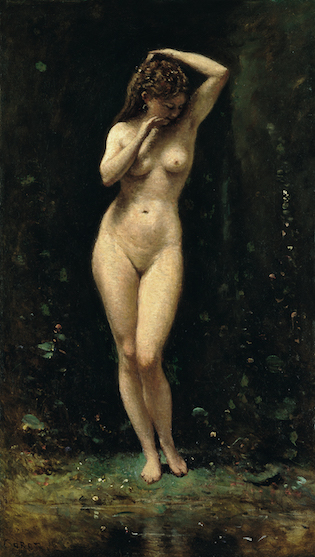 themselves. In the end, viewers do not notice the costume but the attitude. We see Mademoiselle de Foudras (1872) for her arresting gaze and half smile, not for her silk Spanish blouse also worn by other models in the show.

The exhibit turns from portraits to mythological history paintings, where Corot's imagined landscapes frame the silky bodies of women in action—either massaging an ankle, as in Wounded Eurydice (1868-70), or sensually stretching her body upwards, as in Diane Bathing (1869-70). Meanwhile, Saint Sébastien (1850-60), the only male in the exhibit, is perhaps the weakest painting of the lot. His backdrop is muddled with sienna and ochre, while his body is neither relaxed nor tense but just plopped in the center of the canvas. It is the opposite of Diana and Actaeon (1836), where golden bodies glisten against dank, dense backgrounds of forestry and cloudy skies. We are shown the story from Ovid's Metamorphoses, when Actaeon fumbles his way through the forest into the goddess's bathing pool. The composition is scattered but inviting—Corot allows us to peek into the woods where Diana's nymphs reach for robes to hide their goddess's nude body from a mortal's eyes. Actaeon is turned into a stag: a warning against sexualizing the female figure.

As it has been said, it is unfortunate that portraits make up such a small percentage of Corot's work. His gift for telling a story through a simple gaze makes one hunger for more. It is a show you will want to return to, just to catch a soft smile again, immortalized in paint. Corot makes us fall for his subjects and bask in the spotlight he was happy to give them.