The student government at Cornell University improperly donated thousands of dollars in student fees to a coalition of Black Lives Matter activists and left-leaning organizations.

The Student Activities Funding Committee (SAFC), a student-led panel that allocates fees to campus groups, sent $10,000 to the Cornell Students for Black Lives fundraising initiative. The initiative, which is not a registered student organization, describes itself as a student organization "coalition." According to the funding guidelines in the student government charter, for a group to be "eligible to request funds or to spend allocated funds [it] must register with and be approved by the Campus Activities Office by when the budgets are due in each semester."

The contributions have drawn objections from other student groups. Conservative student leaders penned a letter to the editor at the Cornell Daily Sun expressing their concern that the spending violated the SAFC charter and funding guidelines.

"Nothing in SAFC's charter, bylaws or guidelines for funding authorizes the transfer of funds to non-registered groups," the letter reads. "No meeting on the record was held and no vote was recorded."

The Cornell Students for Black Lives initiative has already generated a financial windfall, raising more than $118,000 from a GoFundMe page in collaboration with the Cornell Black Alumni Association. Neither the initiative nor the alumni association returned a request for comment.

Some student government officials defended the allocation. The student assembly's vice president of finance Moriah Adeghe believes the campus government is within its boundaries to spend appropriated money on the "humanity of black people." Adeghe claims any student against the donation should not "mansplain" their dissent and is inherently "anti-black."

"Your fixation on the rules and guidelines shows that you are more concerned with bureaucracy than you are with the lives and humanity of black people," Adeghe wrote in response to the letter to the editor. "Black lives being important is not a political issue and quite frankly, if rules need to be broken to support that cause they will be…. If you think that a donation to a cause that uplifts black people is wrong, no matter where the money came from, you are anti-black." Adeghe did not respond to request for comment.

The donation raised eyebrows from some committee members. According to Morgan Baker, a current member of the SAFC, the student government does have the power to modify or waive the SAFC's guidelines, but it requires "explicit approval" by the student assembly. "There is no indication that such approval was ever sought," Baker said.

The GoFundMe donations will be split between several groups: Black Lives Matter of Greater New York, Communities United for Police Reform, the NAACP Legal Defense and Educational Fund, Southside Community Center, and Showing Up for Racial Justice. Several of these groups have endorsed radical police reforms and former presidential candidate Sen. Bernie Sanders (I., Vt.). The GoFundMe organizers could not be reached for comment.

"If [Adeghe] managed to make the donation technically legal by hiding its justification in a quagmire of bureaucratic paperwork, that just speaks to how far some of these bad-faith student actors will go to project their own political agendas onto actual student affairs," Barker said.

Cornell University did not respond to request for comment. 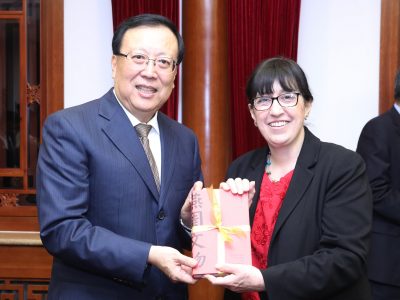