The APB put out for the Ying Yang Twins—the Atlanta hip-hop duo that hasn't been heard from since 2006—was answered this morning under the most peculiar of circumstances.

The Ying Yang Twins thanked Miley Cyrus for reminding her 12 million Twitter followers that they still make music with an ode dedicated to the ratchet snow bunny’s derriere. 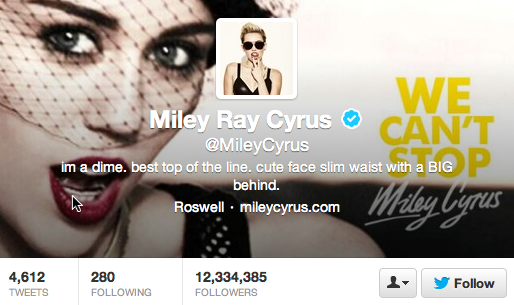 10 million of Cyrus’s followers are probably too young to remember that two dudes who aren’t even brothers, much less twins, once dominated radio.

The duo released the track exclusively to TMZ:

Kaine and D-Roc tell TMZ, they were inspired to make a tune in Miley's honor after learning she was a fan via Twitter — and due to her transition from Disney princess to a derriere-popping powerhouse.

They tell us, "Our fans have been starving for some authentic twerk music. Seeing that Miley Cyrus wants to show the world she is grown by twerking, we decided to give her a little help."

Here’s a sampling of the song:

Do the Miley Cyrus rock wit it
Wiggle wiggle jiggle jiggle shake that s**t
All the n***as saying can she take that d**k?

Miley Cyrus, ooh she wildin'
The way she shake her ass keep a n***a smiling'

We have "Tebowing,""Eastwooding," and now one can "Miley Cyrus."

Unfortunately, "Miley Cyrus" is bargain-bin work by the ATL duo. For rappers whose entire body of work is dedicated to ass-shaking, laterally and longitudinally, this latest offering is a hot mess. Once upon a time, the Ying Yang Twins were the 2000’s answer to Sir Mix-A-Lot. While Mix had only "Baby Got Back," D-Roc and Kaine had "Salt Shaker," "Badd, " and the modern classic, "Get Low."

Ying Yang is credited for introducing "twerking" into the lexicon with 2000’s "Whistle While You Twerk." I know hip-hop is a young man’s game, but it couldn’t be more obvious when D-Roc and Kaine use the bootleg studio from "Hustle and Flow" to cash in on the Miley Madness.