This One Little Secret Could Sink the Hillary Campaign

And I'm not talking about her crush on Saul Alinsky

I'm always amused when journalists, in particular, read one of our stories about Hillary Clinton—such as, say, this one on her relationship with her pen pal, Saul Alinsky—and respond "Oh, this isn't going to derail her campaign LOL YAWN." That sort of response is kind of missing the point, now, innit? Here are never-before-reported-on primary documents written by the probable next president of the United States to a figure of historical significance. They are, on their face, newsworthy and of import, especially to political reporters. The fact that these letters aren't going to "take Hillary down" doesn't really matter.

Anyway. Hillary's ties to the author of Rules for Radicals isn't likely to hurt her with the average voter. You know what might hurt her, however? Her extreme anti-meat views. Consider this tasty nugget from Mother Jones:

As he picked at his beet and greens salad, Strider told me how he'd ditched eating animal products in 2010 at the behest of the then-secretary of state. "You've got to think about your two boys," she told Strider, who had worked as her senior adviser on faith outreach during the 2008 campaign. That night he got a call from Bill Clinton, who extolled the virtues of his new animal-free diet: "If I can do it, you can." A few days later Strider received a box of herbivore-themed books and handwritten recipes jotted down by the former president.

"Hillary Clinton, anti-meat evangelical" has a nice ring to it. The Clintons have a long history of dabbling in anti-meat activism; consider this New York Times report on the Clinton family's favorite physician, Dr. Mark Hyman, who got the former president off of his dangerously low-in-meat diet:

Dr. Hyman was charged with helping the former president after a 2004 quadruple bypass surgery. In the time since, the doctor has become part of the Clintons’ circle of friends and advisers. … One of the first things Dr. Hyman did was to wean Mr. Clinton off his previously prescribed vegan diet. Despite persistent news media reports that he is vegan, Mr. Clinton does occasionally eat fish and lean protein. "It’s hard being a vegan to eat enough good, quality protein and not have too much starch," Dr. Hyman said over lunch at the Four Seasons restaurant in New York. "I know a lot of fat vegans."

It is unclear whether or not Hillary herself is putting her health at risk with a meat-free diet. What is clear is that she's putting her political future at risk with such anti-carnivore flirtations. Who wants to have a beer with someone that might scoff at them for eating a burger with their suds? The average voter may not know who Saul Alinsky is, but the average voter knows damn well who PETA is: 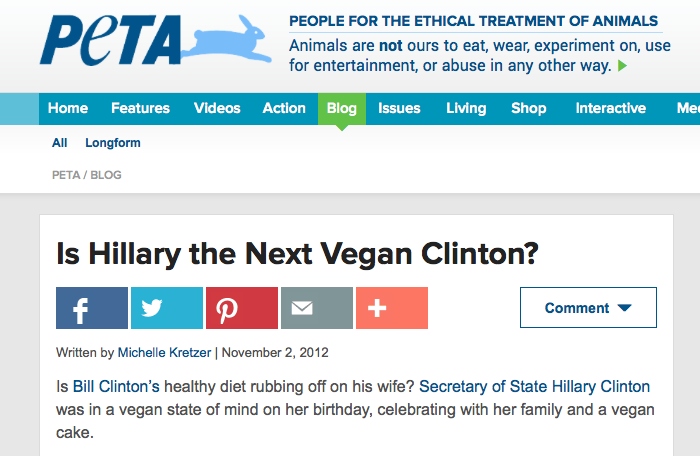 Ew. It's no wonder that she's engaged in some shameless pandering in recent weeks: 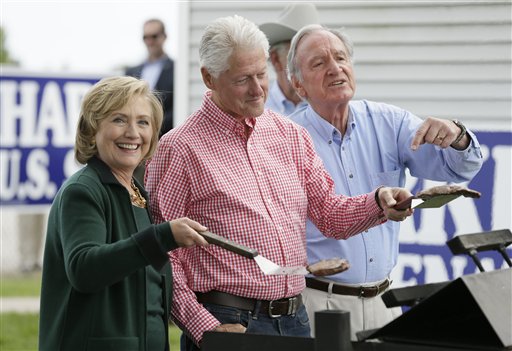 But look at how uncomfortable she seems. The limp wrist. The plastered-on smile. The glassy eyes crying, "Get me out of here, I'm disgusted by this waste of animal flesh!" One hand hidden from view, undoubtedly grasping a cane or walker of some kind as she attempts to maintain her balance. This isn't a woman comfortable around beef. This isn't a woman you want to have a beer with.

I smell trouble for the Clinton camp. It smells like … charcoal.