The Victoria’s Secret Fashion Show occupies a rarefied place in American culture, a lofty perch it shares only with the Super Bowl. It’s a time when men and women put down the weapons they wield in the battle of the sexes to come together and gawk at super-women wearing almost nothing in one long glorious native advertisement.

Behold, the beauty of capitalism!

Karlie was my MVA: Most Valuable Angel.

Karlie is my MVA because she embodies the differing reasons people tune in to the VS experience. Some of us enjoy the production's live music. …

And the likable Angels. …

And the fact that everyone seems to be having a good time. …

On other hand, some of us watch solely for this:

The honorary angel of the night was Taylor Swift, who bonded with Karlie over their ages and American citizenship. The bond between them was deep and emotional, unlike the T-Swift booty slap heard around the world.

Most of the Victoria’s Secret angels are migrant workers. My first-team angel Candice Swanepoel, for example, hails from South Africa (RIP Madiba). Candice had the special distinction of rocking the $10 Million Bra. Candice herself? Priceless.

Carrying that much cheddar can be exhausting.

The two stars were featured in a recent VS holiday ad.

VS even paid to have the Eifel Tower remain lit all night.

May I recommend that Victoria's Secret foot the bill for maintaining the National Mall during the next government shutdown? No Republican I know would mind.

Another standout of the night was Cara Delevingne, who was mastered social media with her eclectic personality.

And with her behind-the-scenes "Twerking Angels" video.

Candice, by contrast, is a bit more reflective about her social media presence.

Now what on earth does Candice have to apologize for? 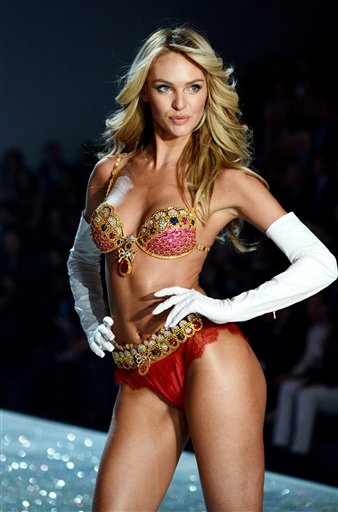 Just like the Super Bowl, the Angels celebrated another successful show with confetti.

I don't think Bill Cowher grinned this much when he won the actual Super Bowl.

Victoria's Secret Fashion > Super Bowl. And America is better for it.