The Left’s War on the Free Press

As anyone who has been paying attention knows, the left isn't terribly fond of the free press because the free press makes the narrative harder to control. That's why you end up with "thought leaders" like Paul Krugman bemoaning the fact that his preferred narrative is "up for argument."*

Krugman's lament is benign in comparison to a pair of other complaints aired this weekend. Remember the story published by Grantland and written by Caleb Hannan that I highlighted? Hannan and his editors were faced with a tough choice: publish a story about someone who was caught lying about her past and then killed herself, or spike it.** They chose to run it. Outrage ensued. Not because their facts were wrong or there was anything untruthful in the piece. But because the person who was caught lying about her past committed suicide.

That there was some level of angst is unsurprising: In this, the era of perpetual outrage, everyone's always angry about something. No, what was disconcerting is that there were people calling for the imprisonment of a journalist for committing the crime of reporting. Consider this series of tweets from Parker Marie Molloy: 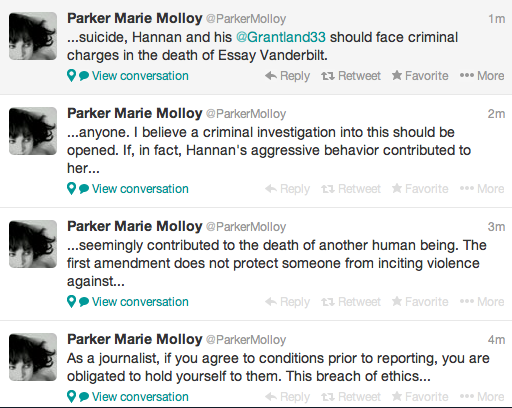 Molloy isn't some random angry person on Twitter. No, she's a journalist. Here's her Twitter bio: "Writing about transgender issues at @TheAdvocateMag; have appeared at @RollingStone, @HuffingtonPost, @Salon, @TPM." In other words, you have a liberal journalist arguing for the imprisonment of a fellow journalist for, again, accurately reporting the facts of a story. Molloy wasn't alone: A number of people on Twitter were calling for the state to invoke anti-bullying laws against Hannan—the theory being that he "bullied her to death" by reporting out the facts of a story—in order to punish him for his "crimes." That is some totalitarian stuff.

Of course, we shouldn't be that surprised that those on the left are thrilled by totalitarianism, given that one of their flagship news outlets, Salon, published an excerpt of a book that called for the nationalization of the media in order to combat the oppressors of generations who have kept you down with myths of opportunity. Salon and Fred Jerome want to nationalize the media and give it back to you, the people. Here's Jerome:

So news (and views) in a socialist society will be brought to you by a plethora of noncommercial sponsors. The government media will report on and discuss, for example, the major government plans for production, how to improve education, and more. But other media—newspapers, TV and radio stations, and Web sites sponsored by workers’ organizations, cultural organizations, youth groups, sports teams, and neighborhood groups will report on issues specific to their interests. …

To be sure, there will be no shortage of economic news in a socialist society. Some news will still come from local and national governments that set product-distribution quotas or help to negotiate them, sponsor trade and international exchange with other countries, and—if the world is still partly controlled by capitalist powers—organize defense against economic (as well as cultural, and possibly military) assaults. But most news reports in socialist media will come from working people themselves.

As a gentle reminder, this piece is not a work of parody. Hard to believe, I know, given its praise of "Waiting for Lefty" later on in the excerpt. Rather, it's a remarkably insightful document into the mind of a person who is, it appears historically illiterate. He must be, right? Because if he wasn't historically illiterate, he might remember how previous societies that controlled the media via the state turned out. Or maybe he's just really psyched for the level of press freedom in China and North Korea? Hard to say. I'm no mindreader. I'm just a simple man, one who is freaked out by the left's desire to use the power of the state to shut down everyone with whom they disagree.

**Again: You can't explain to the reader how you know the subject of that story was lying without revealing she was born a man. You just can't. The options were to run it or not run it, not elide the truth by hiding crucial evidence from your audience.

Update: Parker Marie Molloy argues on Twitter that the characterization of her position is unfair, as she later walked back her proto-fascistic sentiment:

Re: an earlier tweet, I said I thought Hannan's Dr. V report might be criminal. That was a bit hyperbolic, and I'd like to walk that back.

Yes, gutting the First Amendment is "a bit hyperbolic." Good for her I suppose, but I still find it rather telling that her knee-jerk impulse is to imprison a fellow journalist for accurately reporting the facts. And it's not as though Ms. Molloy was alone:

What @calebhannan did is a hate crime. Ending another's life for profit out of ignorance.

I hope @calebhannan gets taken to court for committing a hate crime and is never paid to write ever again.

@ImMeAndSomeone I'm calling for @calebhannan to be arrested for hate crime…

Et cetera. Is Hannan under any danger of actually being arrested? Probably not. But the mere fact that people are aggressively suggesting this is the proper course of action should give us pause. Given that freedom of speech is under fire throughout the world—including in places where it was at one point sacrosanct—it is important to push back against such arguments quickly and forcefully.